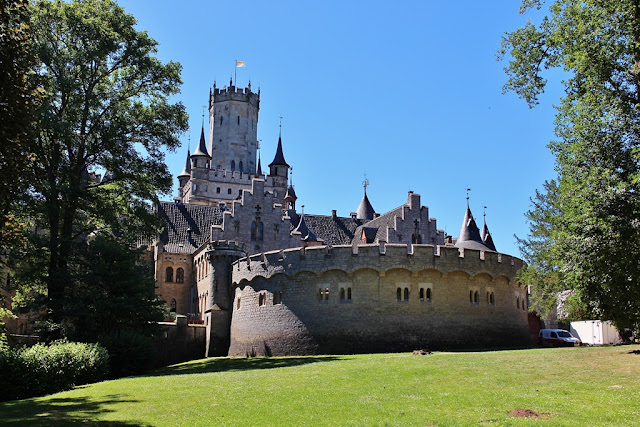 When it was announced in late November that the former Royal Family of Hanover would sell their family seat Schloss Marienburg to the state of Lower Saxony, it all seemed like a done deal despite some noise from opposition politicians. January 1, 2019, should have seen the handover between Hereditary Prince Ernst-August of Hanover, the owner of the Schloss, and the Klosterkammer, a part of the State Ministry of Science and Culture running several foundations and administrating the state-owned monasteries and churches. However, it wasn't to be. Why? The ever-present family quarrels within the Guelph family. As soon as the sale of Schloss Marienburg was announced a little more than a month ago, the dear relatives of the Hereditary Prince, who lives at the Fürstenhaus in Hanover with his growing family, made sure to make their voices heard.

After years of not-so-secret negotiations, Hereditary Prince Ernst-August struck a deal with the state government of Lower Saxony late last year to sell Schloss Marienburg to the state for one symbolic euro. The Schloss, however beautiful, had been a financial burden on the family for many years. You see, castles are an expensive business that hardly ever even breaks even. To make matters worse, Schloss Marienburg, which hasn't been inhabited by the family since the 1950's, isn't in the best of conditions and suffers from dry rot.

The deal also included stipulations that the Landesmuseum Hannover, the state museum of Lower Saxony, would buy important artworks and furniture for two million euros so that they can stay at the castle. Hereditary Prince Ernst-August would additionally put further artworks valued at around six million euros in a charitable foundation to be displayed at the castle. The state, together with the Federal Republic, also announced that they would invest a further 27 million euros in rehabilitation and maintenance. This way, Schloss Marienburg would be preserved for the public to visit for generations to come.

Just a short while after the sale was announced, Hereditary Prince Ernst-August's father of the same name, Ernst-August Sr., announced via his lawyer that he would do everything in his power to stop the transition and alleged "gross indignation" in his son's behaviour. He also sent a letter to the Klosterkammer questioning the validity of the sale citing "gross indignation" once again. However, Ernst-August Sr. doesn't seem to have taken any further legal steps. "Gross indignation" is the only legal reason the father could claim back Schloss Marienburg and other properties in Germany from his oldest son as they were legally gifted in 2004 largely due to tax and financial reasons. (The only other being that Ernst-August Sr. was so poor now that he couldn't pay for his own living - and only if that happened without is own wrongdoings.)

When Ernst-August Jr. took over Schloss Marienburg and the other German properties of the family in 2004, he reportedly took on a large debt as the family had mismanaged them for generations. Ernst-August Sr. alleged spending habits only made matters worse. Ernst-August Jr. was widely regarded as the company doctor. Shortly after taking over management, he, together with his younger brother Prince Christian, made the decision to sell off 44 million euros worth of family treasures to pay off the debts and restore Schloss Marienburg. He also sold off other German estates including Gut Calenberg nearby and tried to diversify the money. However, even though old possessions were sold, it doesn't seem that he was able to create new funds. In addition, Schloss Marienburg continued to be a losing bargain even though the number of visitors multiplied.

Whether the same will be able to achieved for the dispute over Schloss Marienburg? We can only wait and see. Ernst-August Jr. has publicly stated that his father does not have a right to take back the gifted possessions saying that a comprehensive inheritance review came to a clear conclusion. (Quick note: While I did try to read up on the matter of gifting law and legally taking gifts back, it was way too complicated for yours truly to weigh in.)

Another family member, Prince Heinrich, brother of Ernst-August Sr. and uncle of Ernst-August Jr., also made sure to have his voiced heard saying that he didn't think that the Schloss wasn't in such a bad condition after all and that he was against the sale yet expects it to go through anyway. He was in attendance for a press conference alongside his nephew in mid-December though and while occasionally publicly voicing criticism over the years seems to have generally sided with nephew Ernst-August Jr. occasionally attending events together in and around Hanover.

While it was planned for the ownership of the castle to change on January 1, 2019, the state government has announced in the meantime that the sale is currently put on hold. The responsible state minister Björn Thümler has stated that while the legal and factual situation has not changed, the state will not act as referee between father and son. Instead, he asked the Schloss's legal owner, Ernst August Jr., to clear up the situation. While Ernst-August Jr. did not expect there to be any problems handing over the daily management to the new tenants late last year, he also assured that EAC GmbH, the management company that has run the castle since 2004, will continue to do so for the time being if there were. The new tenants of the Schloss did not want to make a comment as of the last days of 2018 - and there hasn't been any in 2019 yet either.

Fun fact: They are actually two noble families: Count Carl and Countess Marie Sabine of Hardenberg (who own Burg Hardenberg, Schloss Hardenberg, as well as a famous liquour company and run a hotel in southern Lower Saxony among other ventures) together with their daughter-in-law Charlotte and her parents Nicolaus and Tania von Schöning, who own Rittergut Remeringhausen to the west of Hanover, will take over the management of Schloss Marienburg, operate the museum and organise events.
Guelphs Hardenberg Schöning