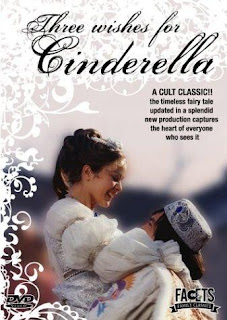 Today is the first Sunday of Advent and so from now on it is totally legitimate to start listening to Christmas music - and watch Christmas movies. Like Christmas markets and Glühwein part of each year's pre-Christmas season in Germany also is a period drama - or rather fairytale film. "Three Wishes for Cinderella" (known as "Drei Haselnüsse für Aschenbrödel" in German or "Tři oříšky pro Popelku" in Czech) is the Bohemian version of the classic Cinderella fairytale including three magic nuts and prince who must actively pursue his love and has to solve a riddle in order to find her:

The cheeks are soiled with ashes but a chimney sweep it is not.
A hat with feathers, the crossbow over the shoulder but the a hunter it is not.
A silver dress with train at a ball but a princess it is not.

Don't worry though, there is still a shoe involved. And the the Czech-German co-production has become such as Christmas classic in Germany that it is on TV no less than 11 times between today and Decemer 26. (It is even available on Netflix as I just found out.) In addition, to the wonderful wintery Bohemian landscape, the film also features Schloss Moritzburg near Dresden. It may be a children's film but in my humble opinion it's probably the best fairytale film there was ever made. For once, Cinderella isn't the girl who just endures the life thrown at her - she actively fights against the injustice. (Yes, I do have a weakness for Czechslovakan-East German fairytale movie productions so I may be a bit biased, but see for yourself...)