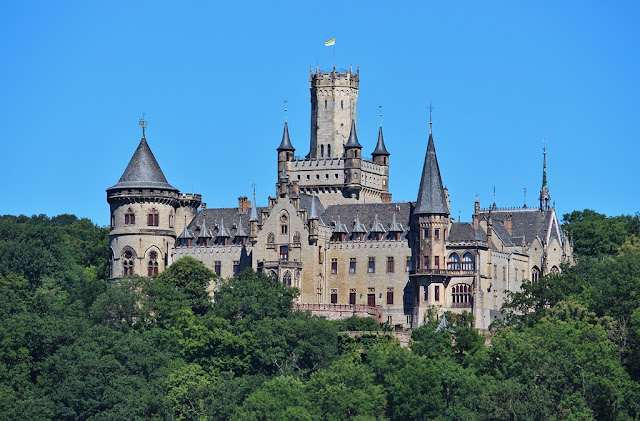 Some breaking castle news coming out of Germany today: Hereditary Prince Ernst-August of Hanover will sell Schloss Marienburg, the family's seat outside of Hanover, for one symbolic euro to the state of Lower Saxony - or more specifically the Klosterkammer Hannover, a part of the State Ministry of Science and Culture running several foundations and administrating the state-owned monasteries and churches.

The Landesmuseum Hannover, the state museum, will buy important artworks and furniture for two million euros so that they can stay at the castle. Hereditary Prince Ernst-August will put further artworks valued at around six million euros in a charitable foundation to be displayed at the castle. The sale of Schloss Marienburg was announced today after rumours had been flying high for a few days. Naturally, the planned sale is going well with the opposition politicians in the state parliament so there will probably a few more days of headlines.

It was also recently announced that both the Federal State of Germany as well as the state of Lower Saxony would invest 27 million euros into the upkeep of Schloss Marienburg, which was built during the 19th century by the last King of Hanover George V for his wife Queen Marie. Over the last couple of years it has become apparent that the castle is in increasingly worse condition as the partly artificial hill the hill is standing on is partly collapsing and dry rot has been found in the castle's walls.

Hereditary Prince Ernst-August, who lives with his family at the Fürstenhaus in Hanover, has long been campaigning for the state to take a larger interest in Schloss Marienburg, the last major Guelph castle preserved in its original state in Germany. A few years ago, the Guelph family made headlines when they held a big sale at Schloss Marienburg which brought in 44 million euros.