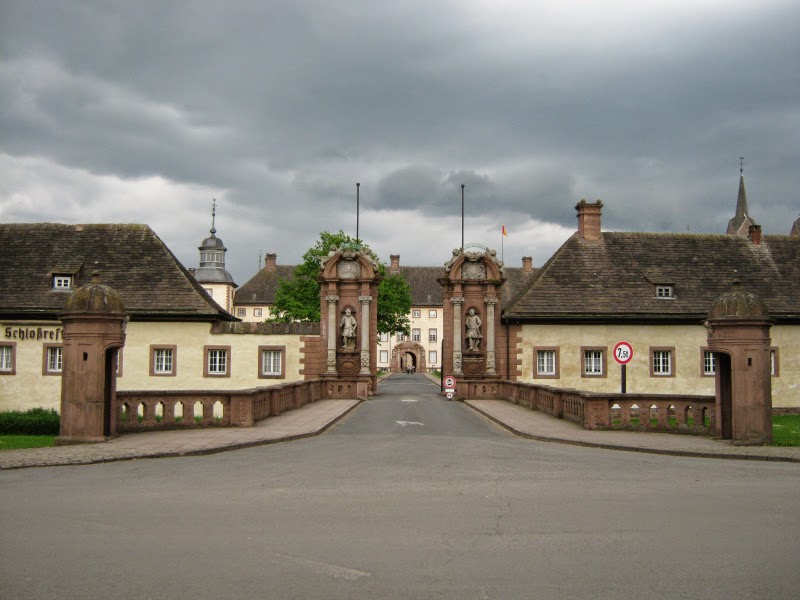 Castle, abbey, even Imperial Abbey. All of those terms would be correct descriptions of what we are simply going to call Schloss Corvey, the home of the Dukes of Ratibor and Princes of Corvey - more on their family later - in today's post. The Schloss, which might become a UNESCO World Heritage Site this year, boasts a rich history going back to no other than Charlemagne (747/8-814) himself. It was the King of the Franks who firstly had the idea to found a monastery in the recently conquered area to missionise the local heathens though his plan was only realised by his son, Louis the Pious.

In 815, Louis announced his plans for the foundations of an abbey east of the Weser river. A year later the first monks arrived from Corbie Abbey in Picardy to a site called Hethis where they founded a new monastery. The monastery was given the name Nova Corbeia, 'new Corbie', a name that would later evolve into 'Corvey'. However due to unfavourable location, the monastery was moved from Hethis and reconstructed on its current site just outside of the North Rhine-Westphalian town of Höxter in 822. Corvey Abbey, or Kloster Corvey in German, became one of the most influential and significant monasteries in Europe in the Middle Ages. 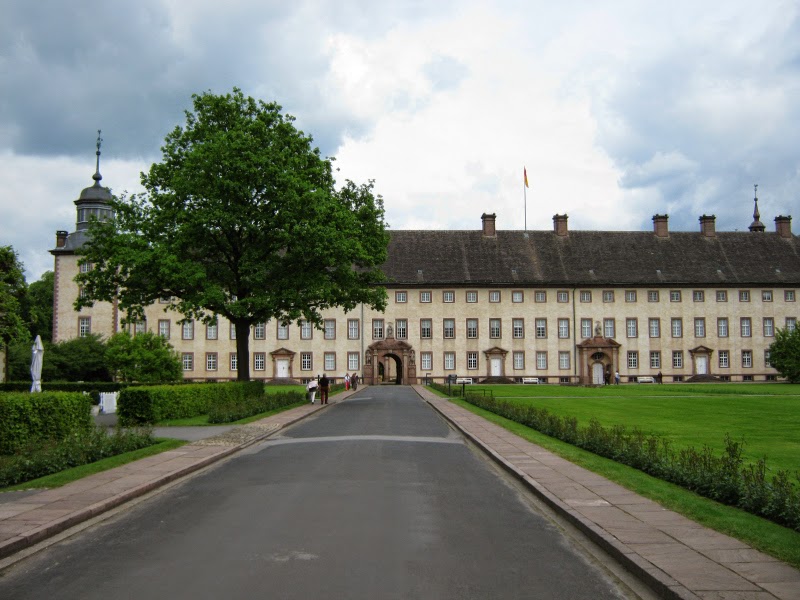 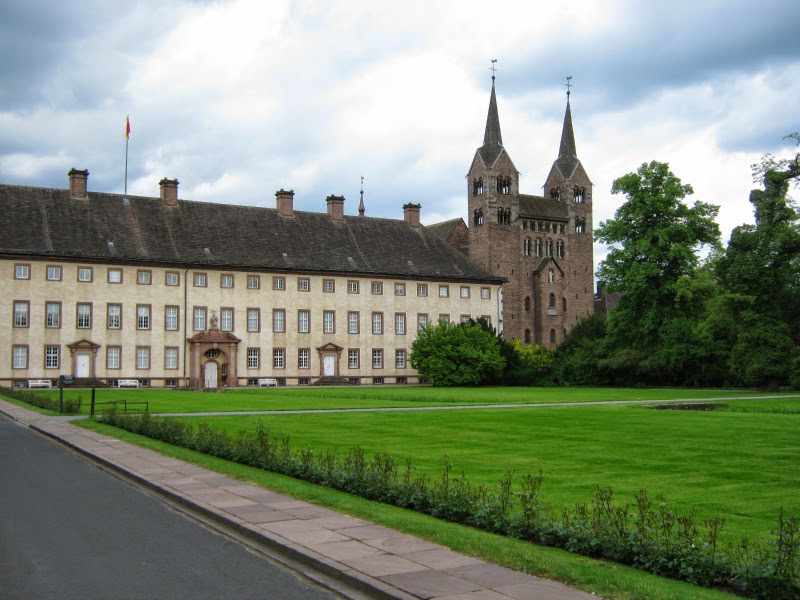 In 826, an independent Benedictine monastery was founded in Corvey, which, seven years later, was the first place east of the Rhine river who received the minting privilege. Originally only dedicated to Saint Stephen, the relics of Saint Vitus were gifted to the monastery in 836 and since then the monastery's church has been dedicated to both saints. Corvey also quickly became a place of pilgrimage as Saint Vitus was considered the patron of (Lower) Saxony.

Bestowals and donations made Kloster Corvey one of the richest monastery in the whole of medieval Europe and enabled extensive building activity. During the 9th century the first stone church was built, enhanced and preciously decorated. The Carolingian west end with its two towers (built between 873 and 885) are the earliest medieval structure in North Rhine-Westphalia and the only one of its kind to survive to this day. Ninth-century wall paintings still decorate its inner walls though the actual church has since been remodelled according to Baroque-style. 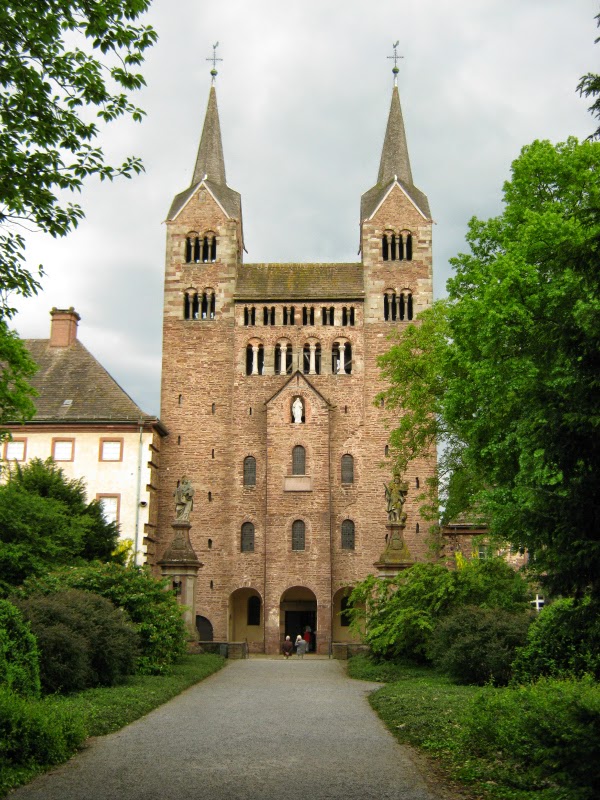 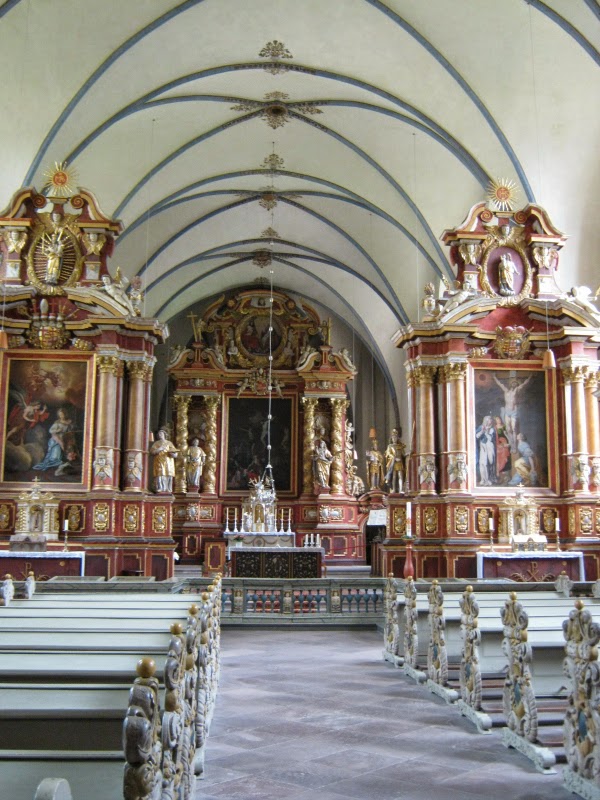 However, Corvey Abbey wasn't only rich, it was also an important starting point for the evangelisation of Northern Europe as a stream of missionaries departed from there to the Scandinavian countries. The most important of them was Saint Ansgar, the "Apostle of Scandinavia". The abbey also soon became famous for its school, which produced many celebrated scholars, as well as its library. Throughout Kloster Corvey held the status of an imperial abbey which meant that they had no territorial lord above them other than the Emperor.

However, during the late Middle Ages and the early Modern Ages, the star of the abbey started to decline and especially suffered during the Thirty Years' War. In 1634, imperial troops heavily damaged the abbey. The famous library was plundered and many books destroyed. By the late 17th century the abbey was rebuilt starting with the monastery's church which received a Gothic make-over though its Carolingian west end was kept. Until the early 18th century, the extensive abbey and farm buildings surrounding the church were built. 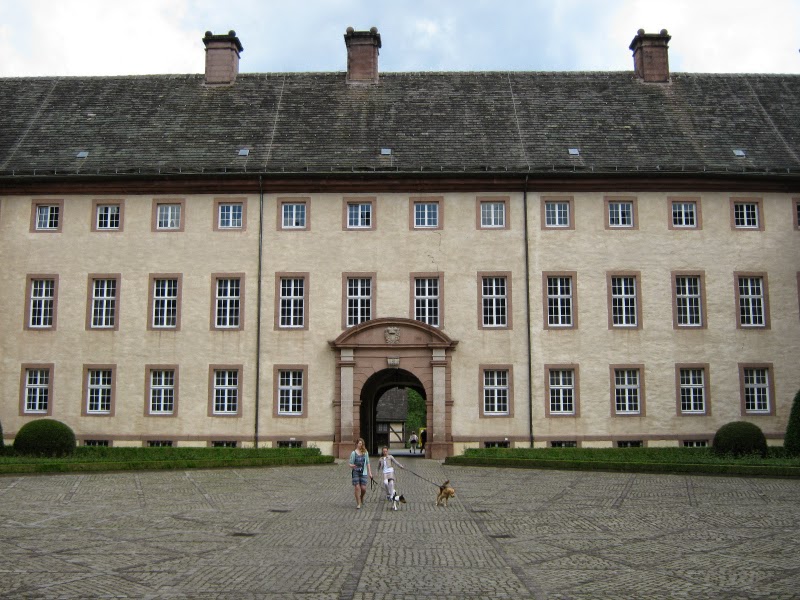 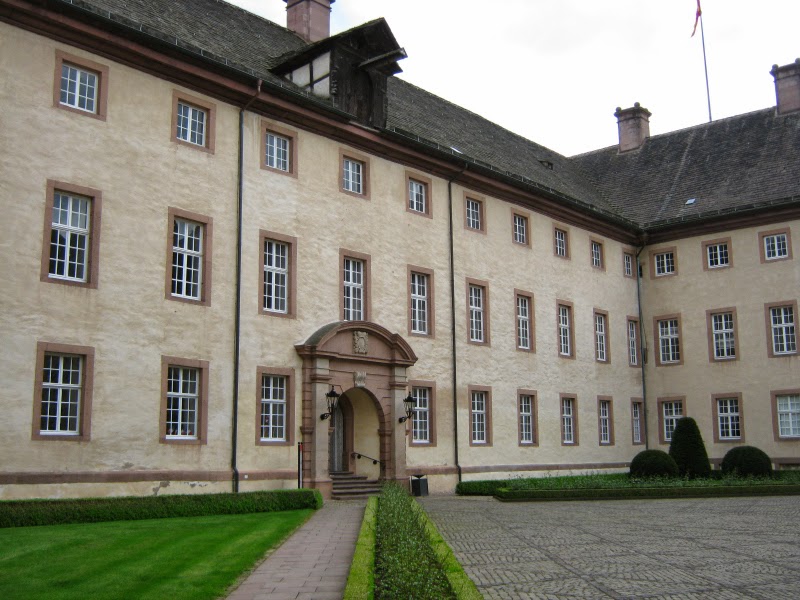 In 1792, Pope Pius VI elevated the abbey to a Prince-Bishopric and Corvey experienced a short period of spiritual prosperity before being secularised in 1803 by the Principal Decree of the Imperial Deputation (also known as Reichsdeputationshauptauschluss in German). Subsequently, the former Kloster Corvey fell into the hands of the House of Orange-Nassau before becoming a part of the Kingdom of Westphalia under Jérôme Bonaparte. Through the Congress of Vienna in 1815 the Prussians came into the possession of Corvey which remained a bishopric until ten years later.

However already in 1820, the buildings were given to Landgrave Viktor Amadeus of Hesse-Rotenburg as a compensation for lost properties west of the Rhine river. The Landgrave had the abbey converted into a castle and between 1825 and 1833 he had 36,000 books transferred from Rotenburg to Corvey founding a new impressive library which was extensively expanded under the aegis of August Heinrich Hoffmann von Fallersleben, a German poet and most famously the writer of the German national anthem, who worked as a librarian for Landgrave Viktor Amadeus' heir. Today the Schloss has one room for each day of the year, exactly 365. 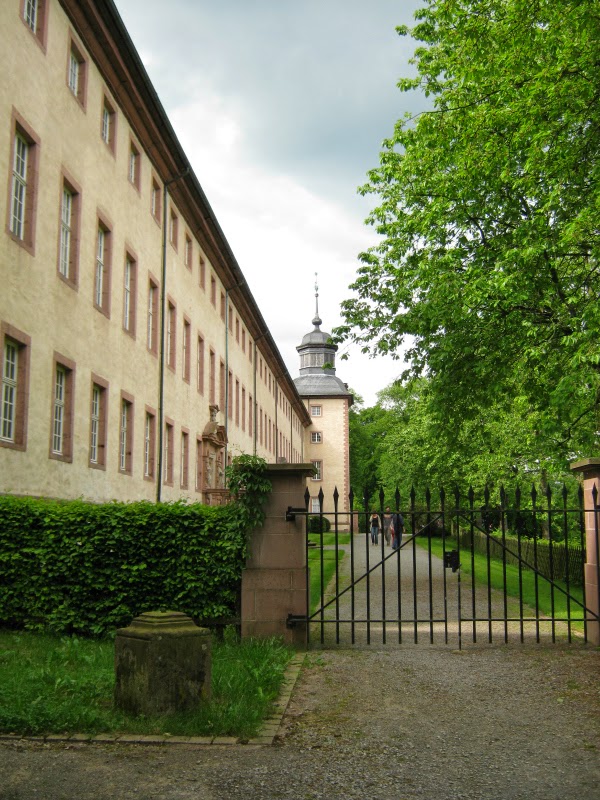 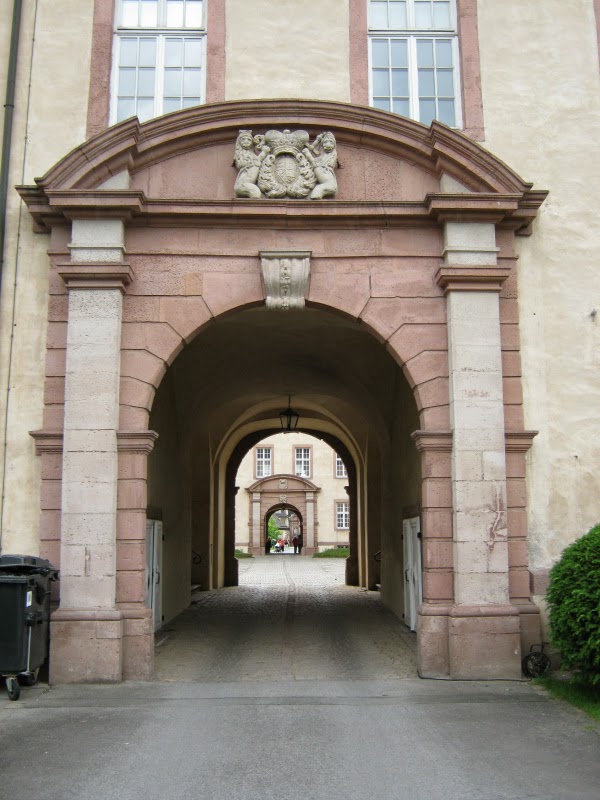 Having no children of his own, Landgrave Victor bequeathed his allodial estates to his nephews  Prince Viktor and Prince Chlodwig of Hohenlohe-Waldenburg-Schillingsfürst. Prince Viktor was created Duke of Ratibor and Prince of Corvey by the Prussian King in 1840 and his descendants still own Schloss Corvey to this day. However, they are often called Metternich-Sándor as Duke Franz Albrecht (1920-2009), father of the current Duke Viktor (IV), was adopted by his maternal great-aunt. The current Duke of Ratibor and Prince of Corvey and his family live in a building on the estate and parts of the castle as well as the church are accessible to the general public.

Entering the castle grounds on the western side, you first make your way into the the left courtyard of the Schloss where the entrance to the museum is located. While there are public tours on Saturdays, Sundays and holidays, you can also tour it by yourself. Of course both has its advantages and disadvantages but as we would have needed to wait another hour for a guided tour to start, we decided to explore the buildings on our own. All in all we easily spent almost two hours in the museum as well as the church. 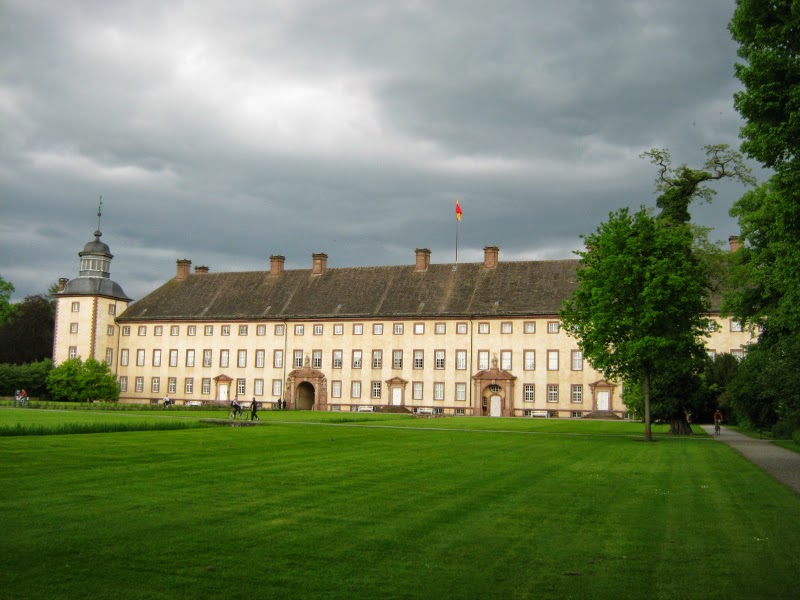 The museum gives an overview over Corvey's medieval history but also dedicates a number of rooms to princely life in the 19th century by leading through different salons. Probably one of the highlights of the tour is the imposing Kaisersaal (emperor's hall). Being a lover of books, I also enjoyed the ten or so library rooms featuring some 74,000 books which led to the questions whether anyone has ever actually read all of them and how many lifetimes would be needed. Of course we also toured the abbey church though it's easy to the blinded by its Baroque splendour so also make sure to have a look at the inside of the west end, the main reason for Schloss Corvey's application to become a UNESCO World Heritage Site this year.

Good to know:
Schloss Corvey is open to visitors between April and October, apart from April and October itself on a daily basis between 10am and 6pm. Adults pay 6 euros though all kinds of concessions are available. On Saturdays, Sundays and public holidays there are two guided tours each day starting at 11am and 3pm and costing an additional 3 euros. Private photography without flash is allowed though you need to buy a license for one euro. For more information have a look here.
Bonaparte Church Germany Hesse (family) Hohenlohe Hohenzollern Höxter Metternich Nassau North Rhine-Westphalia Open