Between Ravens and Charms: Nine Places to Visit in Merseburg

August 08, 2022
* This post is part of a paid partnership with the cities of Weissenfels, Merseburg and Zeitz. * 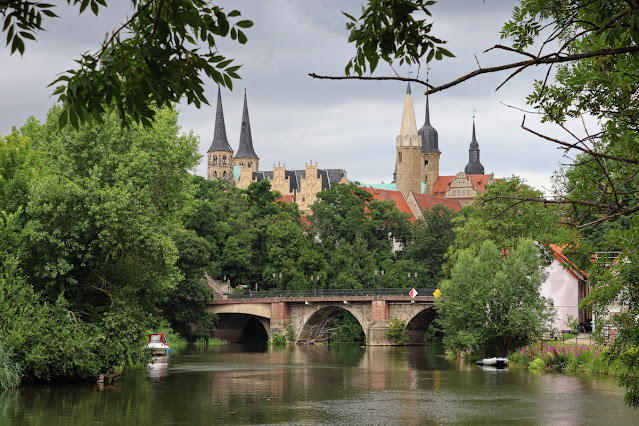 Have you heard of Merseburg? This medieval German town is situated on the banks of the river Saale approximately 30 kilometres west of Leipzig. It boasts a great historical significance. Firstly mentioned in 850, it became the seat of the Bishop of Merseburg in 968 and remained so until the Reformation. During the Early and High Middle Ages, the town once was the most important Kaiserpfalz, roughly translated as imperial residence, in the East of the Holy Roman Empire for the ever-travelling ruler. While its importance somewhat faded when the modern age rolled around, it once again became the home of a ruler between 1657 to 1738 when Merseburg was the residence of the Dukes of Saxe-Merseburg, a secundogeniture of the Albertine line of the House of Wettin. Sounds interesting? Here are nine recommendations what to do and see when visiting Merseburg. 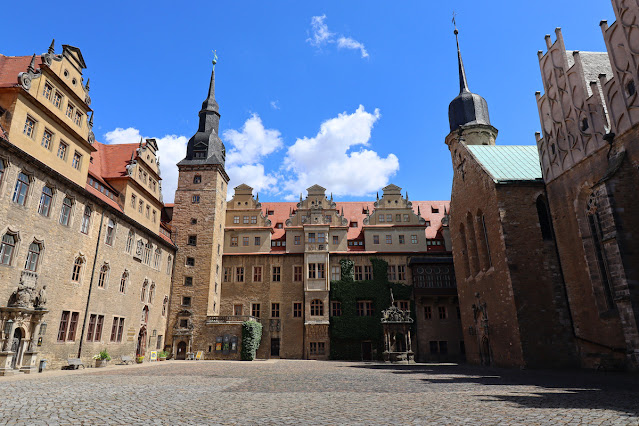 Start at Schloss Merseburg, of course. (I'm a Castleholic after all - and one that sometimes forgets how much she likes castles built during the Renaissance era; with all their towers, turrets and exterior decorations, they look exactly how I imagined castles to look like when I was a child. So needless to say, I was a fan! But back to the history...) The current Renaissance-style castle was built between 1470 and 1500 on the site of a former Ottonic fortification. In its history this and the former castles located in the same spot, served as Kaiserpfalz for the Emperor, Bishop's Seat and ducal residence. After the Congress of Vienna, it became the seat of the local administration but has also been home to a museum for more than 100 years now. The Kulturhistorisches Museum is a great starting point for any visit to Merseburg because it gives a great overview over the town's history since the earliest days. When I visited I even got to try out writing with a quill. Not going to lie, I was slightly sceptical at first but it turned out to be heaps of fun. 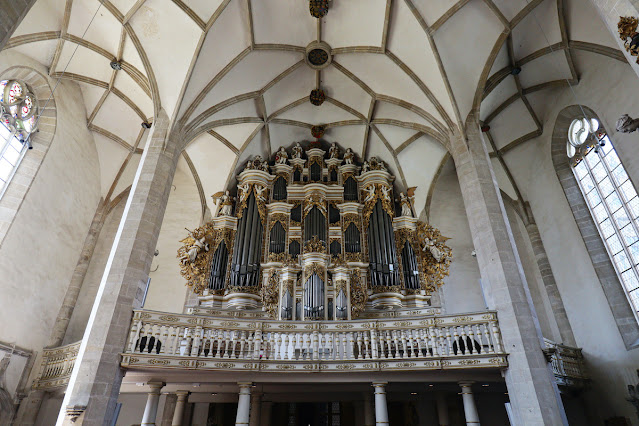 Right next to the Schloss, you will find Merseburg Cathedral. It actually forms the fourth wing of the castle though it has a separate entrance. 1000 years ago, it was the imperial couple Heinrich II and Kunigunde themselves who laid the foundation stone for the Merseburger Dom. The Romanesque and Gothic cathedral is a stark reminder of the town's importance during the Middle Ages, so there is plenty to discover. A special highlight is one of the largest Romantic organs in Germany built by Friedrich Ladegast, one of the most famous German organ builders. It was no other than Franz Liszt who wrote the first pieces played on this organ. The Willi-Sitte-Galerie opposite the Cathedral located in the Curia nova offers a stark contrast to the medieval church. Named after Willi Sitte, a German painter who was for a long time the president of the East German association of visual artists, it exhibits many of the artist's works and is a welcome change to the otherwise history-heavy main attractions of Merseburg. Sitte, a figurative painter, is best known for his large-scale, politically charged canvases depicting themes of class struggle, fascism, war and sex. The Willi-Sitte-Galerie also offers changing special exhibitions... 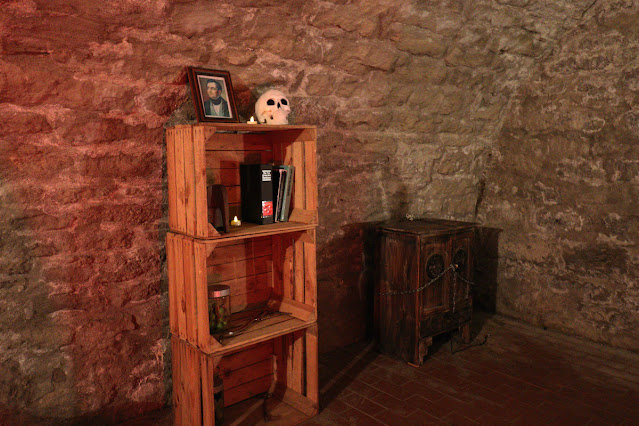 ...as well as something a little different: Merseburg is the home of physician Carl von Basedow. If you know German, you will probably be familiar with that name. Graves' disease is actually known as Basedow'sche Krankheit or Morbus Basedow in German, as it was Basedow who first described the autoimmune disease that affects the thyroid in Germany. This year, Merseburg celebrates the 200th anniversary of Basedow moving to the city with, among others, a medicine-inspired Escape the Room at Willi-Sitte-Gallerie called "Not-OP. Die Uhr tickt." If that's not up your alley, there is also an interesting exhibition on Basedow in general. 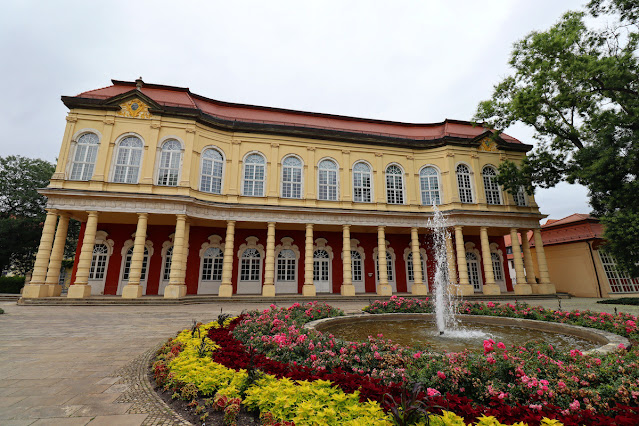 Those who can sightsee a whole town within a day, also need a good place to take a break - and there is hardly a better place in Merseburg than the gardens of Schloss Merseburg. In addition to plenty of green spaces for relaxation, the gardens have a couple of interesting structures to discover such as the Orangery (which you can see in the picture above), a very real looking equestrian statue of King Friedrich Wilhelm III of Prussia as well as a great view over the river Saale flowing along the hill Schloss Merseburg and much of the old town is located on. While you are on your way from the Schloss to the park, also pay a visit to Merseburg's famous ravens. 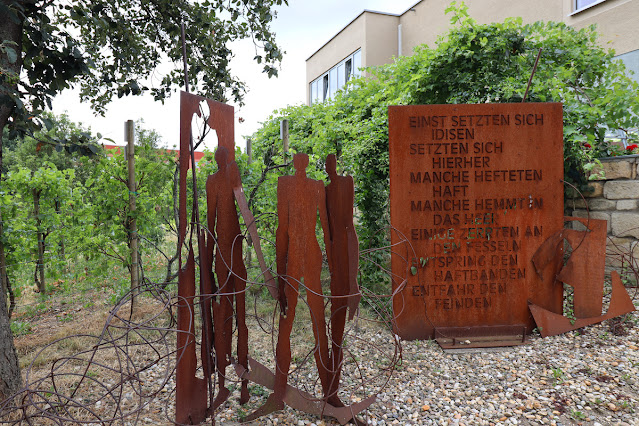 Why there are ravens in Merseburg? Legend has that Bishop Thilo von Trotha once ordered to execute his servant who was suspected of having stolen a precious ring from his master. A long time went by and the ring was found in a raven nest on the palace’s roof while it was being under repair. The bishop felt remorse and changed the family crest, showing since then a black raven with a golden ring in its beak. To remind us to never make hasty decisions in a bad mood, Thilo captured a raven - and to this day, he can be found in a cage next to Schloss Merseburg. But that's not the only legendary or mythical thing you can find in the town: There are also the Merseburg charms. They are two medieval magic spells written in Old High German believed to be from the 9th century discovered during the 19th century. They are the only known examples of Germanic pagan belief preserved in the language. You can find both of them written on large metal panels in the city. 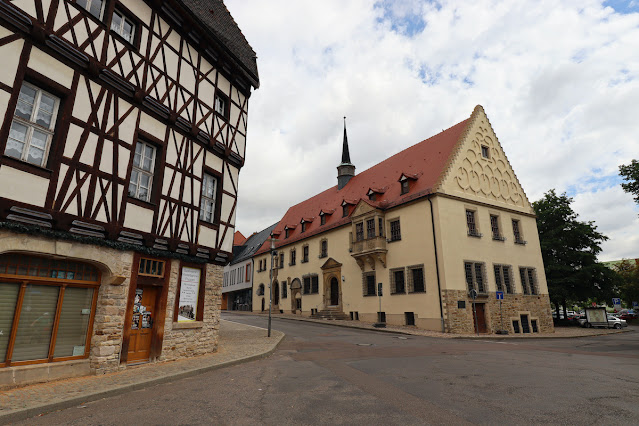 While you wander through the city, there are also plenty of old buildings from all eras to discover. Above you can see the Old Town Hall on the right as well as Merseburg's oldest building on the left. Built starting in the 15th century, the Old Town Hall combines features from Gothic and Renaissance style. Others sights include the St. Maximi Church, the Göbelbrunnen as well as the Tiefer Keller area, where there used to be deep cellars - that's actually the literal English translation of the name - that the people of Merseburg used to dig to store their goods. 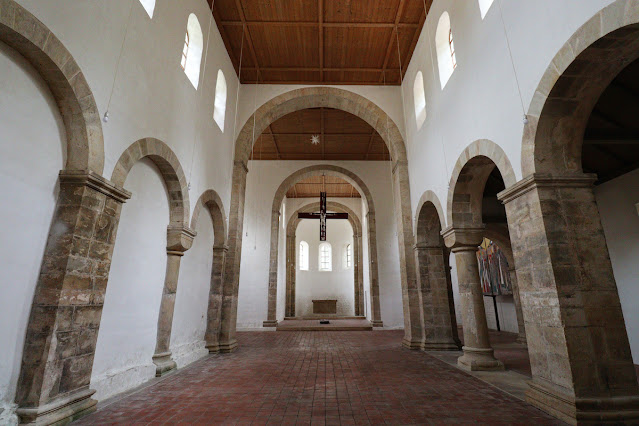 Finally, don't forget to cross the Saale river to also have a look at the St. Thomas of Canterbury Church. It may not be the most impressive church but it is a very fascinating one. When you enter, you are taken slightly aback as to why you have to walk down a flight of stairs to actually reach it. The reason behind this curiosity? As the Saale river flows right next to it and floods became a regular part of life, the crafty people of Merseburg decided to fill up the church's interior to a higher level as they raised the surrounding lands. Only during the 1990's, the church was restored to its original deep level. These days, however, it is not used as a place of worship anymore but rather a space for cultural events. There is also a fascinating piece of art to be found at the church reflecting on the cruelty of mankind. On a brighter note, right next to the church, you will also find the great view of Merseburg you can see in the first picture of this post. 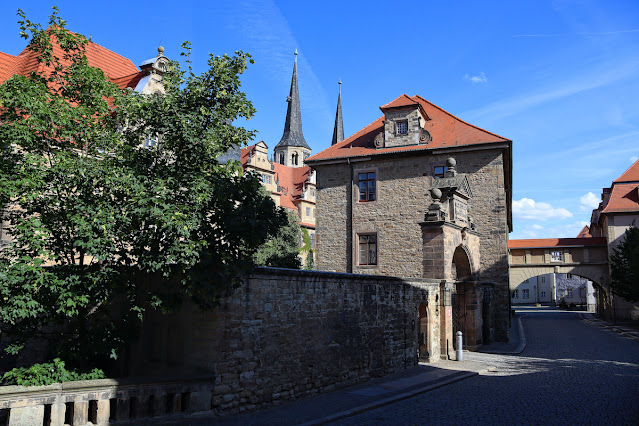 Last but not least, don't forget to simply stroll around... Merseburg has an abundance of beautiful buildings to discover. Some medieval, others from the days since. It's an eclectic mix of styles with big and small things to discover. To find out more details on all things visiting Merseburg, have a look here.
P. S. Need a place to stay? I made the Best Western in Merseburg my base camp for the weekend that took me to Merseburg, Weissenfels and Zeitz. Conveniently located close to the main station, it is a great starting point to discover the history, culture, architecture and nature of the region - and it even offers a great view over the old town of Merseburg itself.
Germany Saalekreis Saxony (family) Saxony-Anhalt Wettin