Schloss Cecilienhof may be the youngest castle of the Hohenzollern dynasty and only slightly more than one hundred years old, but it still has a rich history to boast. From the residence of the last German Crown Prince and his family to the meeting place of Stalin, Truman and Churchill (later Attlee), it is quite a ride this palace has seen in the last 107 years. And while it is not Germany's youngest castle as I erroneously claimed earlier on, it is a thoroughly modern one, today's Hohenzollern wouldn't mind having an apartment at. 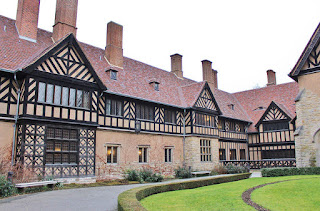 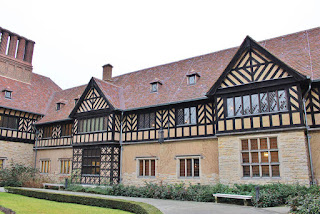 As one does when one is Emperor, Kaiser Wilhelm II ordered the construction of Schloss Cecilienhof in 1912. The palace in the New Garden in Potsdam wasn't his first castle project though the one most close to home as the palace was intended as a residence for his oldest son and heir, Crown Prince Wilhelm, and his wife Cecilie, hence the name Cecilienhof (or Cecilie's court), as well as their children. With a construction cost of 1,498,000 Reichsmark, the Schloss was intended to be completed in October of 1915. 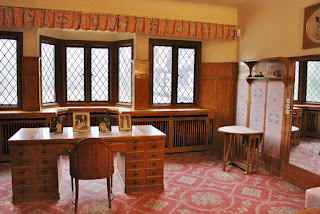 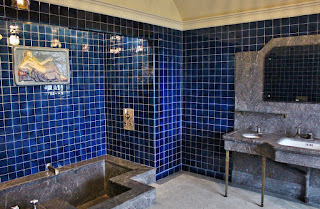 Kaiser Wilhelm II commissioned Paul Schultze-Naumburg as the architect for the new Schloss. He drew inspiration for the new Tudor-style mansion from, among others, the Jagdschloss Gelbensande, a hunting lodge on the Baltic Sea owned by the parents of Crown Princess Cecilie, Grand Duke Friedrich Franz III and Grand Duchess Anastasia of Mecklenburg-Schwerin, as well as Bidston Court in the English town of Birkenhead. Comprising of no less than 176 rooms, the partly half-timbered castle surrounds five courtyards. The roofs are adorned with 55 different chimney stacks, most of them only decorative and none looking like the other. 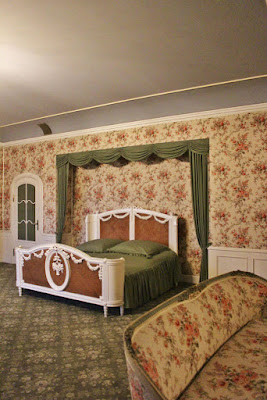 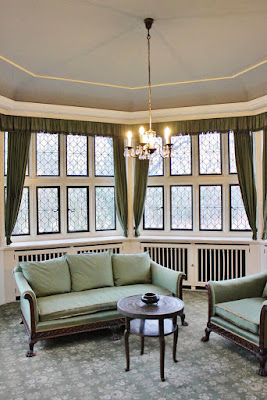 In 1914, the First World War broke out and construction was momentarily halted but resumed a year later. You can imagine that the construction wasn't popular with the German population. Apparently especially Crown Princess Cecilie pushed for it saying that the German Empire needed a thoroughly modern palace to show off to the world. In August of 1917, Crown Princess Cecilie moved into Schloss Cecilienhof where she gave birth to her sixth and youngest child, a daughter appropriately also named Cecilie, a month later. By October, the last touches on the palace were finalised. 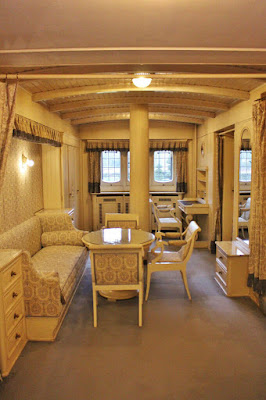 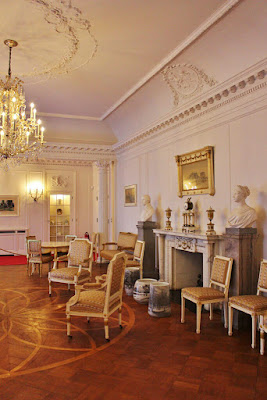 While the exterior of Schloss Cecilienhof was designed in the English Tudor-style, many of the more private interior rooms actually have a nautic feel to it. Crown Princess Cecilie was a born Duchess of Mecklenburg and wanted her northern German heritage represented in the palace. Some of the rooms were actually built to resemble the interior of a ship's cabin, all complete with furniture attached to the ground and walls (which actually saved them from being removed from the palace three decades later but that's a story for later on). Most of the rooms were designed by Paul Ludwig Troost. 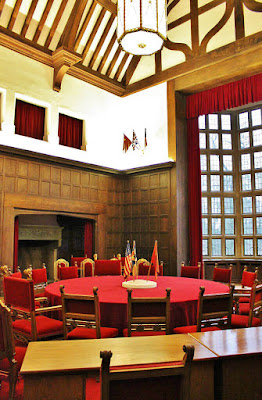 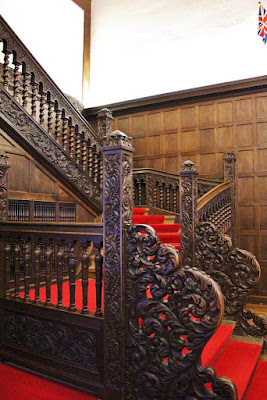 Perhaps the singularly most impressive feature of Schloss Cecilienhof is massive and stunning Baroque-style wooden stairway made of oak. A gift to the Crown Prince and Crown Princess by the city of Gdańsk (or Danzig at the time), where the couple had lived previously. The stairway connected their living room to the upstairs private apartments. However, Wilhelm and Cecilie didn't get to enjoy Schloss Cecilienhof for long, at least for now. In 1918, World War I ended, as did the monarchy in Germany. 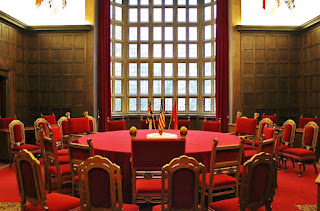 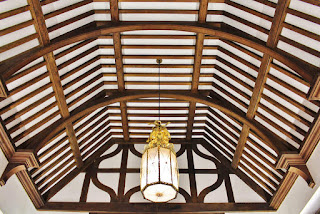 During the turmoil of the revolution, the Crown Princess and her children moved into the nearby Neues Palais were Empress Auguste also lived until the joined the Kaiser in exile in the Netherlands.  Crown Prince Wilhelm also wasn't allowed to stay in Germany. Meanwhile, Crown Princess Cecilie continued to live at Cecilienhof until 1920, after which the moved into a private residence of the now formerly imperial and royal family. Two of her sons remained at the palace while attending school. The question of ownership was only settled in 1926 when an agreement between the new republic and the Hohenzollern dynasty was reached. While Schloss Cecilienhof became property of the state, Crown Prince Wilhelm, who had been allowed back into Germany three years prior, and Crown Princess Cecilie were granted a right of residence. This was limited in duration to three generations. 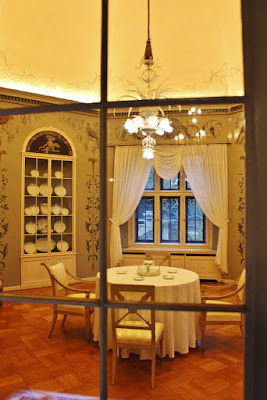 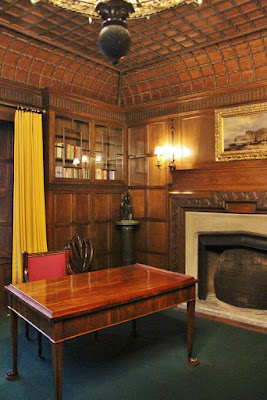 While not necessarily having an awful lot to say to each other, Wilhelm and Cecilie continued to live at Schloss Cecilienhof for the following two decades. (Thank God for 176 rooms...) While the Crown Prince left Potsdam for Oberstdorf in January of 1945 for medical treatment, the Crown Princess fled her home in February as the Red Army advanced further towards Berlin. When she left, most of the furniture remained at the Schloss. Later that same year, Schloss Cecilienhof became centre stage for a major world event - and the living room where the last German crown princely family had spent time only a few months earlier, suddenly became the meeting place for the world's most powerful men. 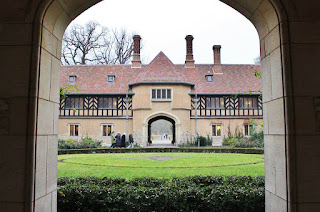 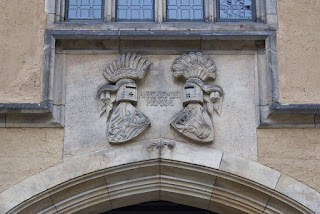 The Potsdam Conference - officially the "Berlin Conference" but the German capital was too heavily damaged - took place at Schloss Cecilienhof from July 17 to August 2, 1945. It was the third and longest summit between the heads of government of the Soviet Union, the United Kingdom and the United States during the course of World War II, which wasn't completely over yet as the war in the Pacific raged on. For the conference, 36 rooms and the Great Hall were renovated and refurnished. The furniture of Wilhelm and Cecilie had been removed and put into storage. Unfortunately, the storage house caught fire and the original furnishings were destroyed. Only those who - in accordance with its nautical theme - were attached to the walls and ground, survive to this day. 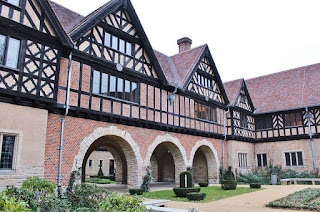 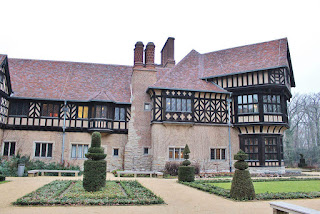 After the end of the Potsdam Conference, Schloss Cecilienhof was used as a club house by Soviet soldiers. The Hohenzollern were officially dispossessed in September of 1945. The Schloss later came into the hand of the state of Brandenburg and a memorial for the conference was set up in the private apartments of the royals. Another part of the palace was used by the East German government as a reception venue for state visits and yet another part as a training facility. In 1960, parts of the Schloss became a hotel which they remained up until a few years ago. The exterior of Schloss Cecilienhof was renovated for ten million euros during the last decade. While mostly a museum (and a still empty hotel) today, it is also occasionally used for official functions by both the federal and state governments. 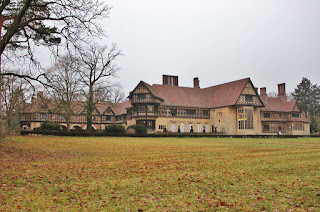 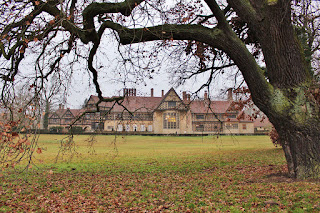 As of late, Schloss Cecilienhof also made a couple of headlines as part of the much discussed Hohenzollern compensation claims. The head of the family, Prince Georg Friedrich of Prussia, wouldn't mind a right of residence at the former home of his great-grandparents. While I'm not quite sure whether this is because of the three-generation-clause of the 1926 agreement, I cannot help but think that he didn't do himself any favours with that considering Schloss Cecilienhof is one of the two most famous Potsdam palaces, the other being Schloss Sanssouci. About every only slightly historically and politically aware German has heard of this place and knows about its post-royal significance - and thus it made for a very good and relatable headline not in favour of the Hohenzollern claim.
2020 Brandenburg Germany Hohenzollern Prussia