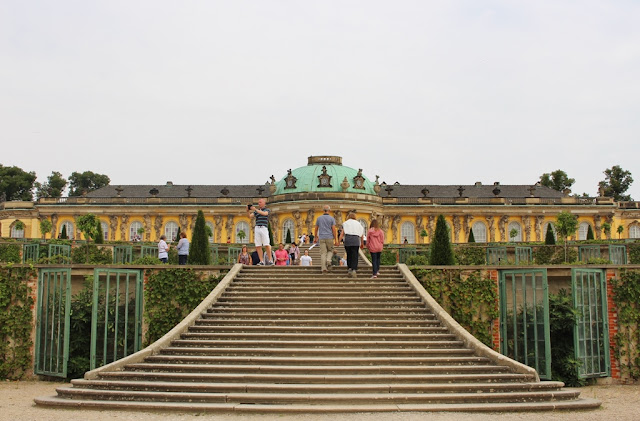 Potsdam is most famous for its magnificent palaces and parks that date back to the city's time as the former royal residence of Prussia. Today's Schloss is the best known of them all and the palace without worries: Schloss Sanssouci. The "humble" summer residence of King Friedrich II, 'the Great', counts just ten principal rooms yet is often considered one of the German rivals of the Château de Versailles characteristically laying above a vineyard just outside of Berlin. In fact, Friedrich the Great built Sanssouci as a private residence where he could relax away from the pomp and ceremony of the Berlin court. 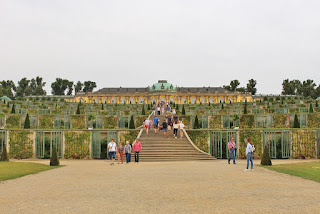 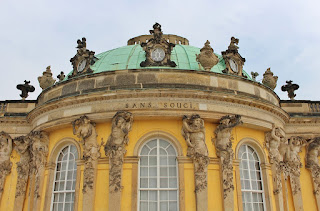 Friedrich is probably the most admired Prussian ruler, as famous for his military victories making Prussia one of the leading European powers as for his patronages of the arts and the Enlightenment. Sanssouci was his hideaway, the place of gathering for the "philosopher-king" with such famous names as Voltaire. 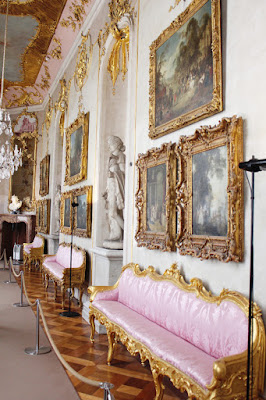 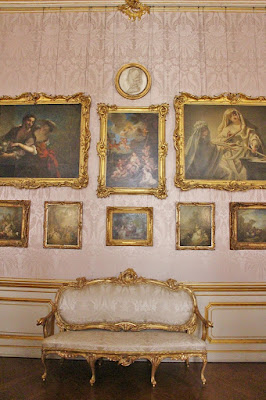 It was on August 10, 1744, that King Friedrich II gave order to cultivate a hill in Potsdam by adding vine stocks. In January of the following year, he mandated the construction of a small pleasure palace in Potsdam above said vineyard. Friedrich had very specific ideas for his palace and he commissioned Georg Wenzeslaus von Knobelsdorff to put them into fruition. While Knobelsdorff wanted to add a basement with a large flight of stairs to give the palace a more representative feel, the King refused as the palace was intended as a purely private place and he wished for a strong connection between the living area and the gardens. 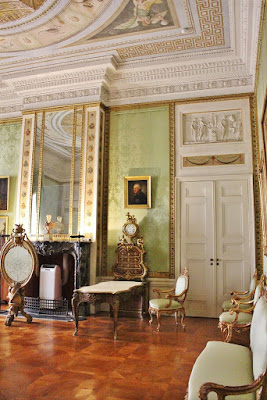 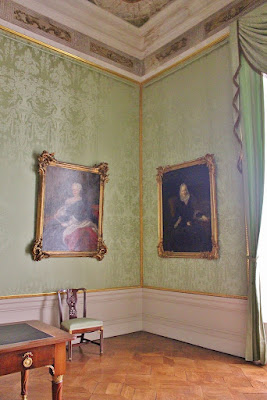 In April 1745, the foundation stone of Schloss Sanssouci was laid and construction went ahead quickly. Already two years later, Friedrich was able to move into the Rococo-style palace. In fact, Sanssouci is considered one of the examples of Frederician Rococo, an architectural style developed in Prussia during the King's reign combining influences from France, other German states, especially Saxony, and the Netherlands. Apart from the war years, Friedrich lived at Schloss Sanssouci from the end of April to the beginning of October. His wife née Elisabeth Christine of Brunswick-Wolfenbüttel-Bevern, however, wasn't very welcome at the palace. The couple led separate lives and rarely met with Elisabeth Christine holding court at Schloss Schönhausen. It was only during one of the evacuations of the Berlin court to Magdeburg during the Seven Years' War that she saw her husband's palace for the first time. 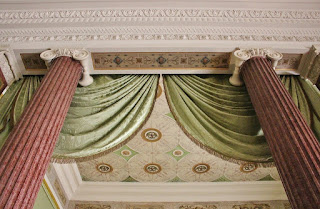 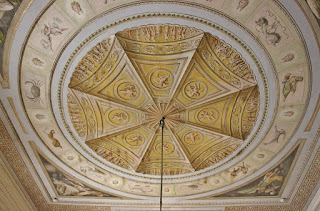 Schloss Sanssouci was Friedrich's private residence while he performed his duties as a monarch mainly at the Neues Palais in Potsdam, which he built at about the same time (and we are going to have a closer look at in the weeks to come). His wife used the Berliner Stadtschloss to perform her duties as Queen and was thus rarely visited by the King. Since the construction of the Potsdam palace, Schloss Charlottenburg also took a backseat as did the palaces of Königsberg (today's Kaliningrad in Russia) and Breslau (today Wrocław in Poland). At Sanssouci, Friedrich indulged in his favourite pastimes such as music, composing and philosophy. Despite the palace's apparent splendour, Friedrich lived modestly without pomp and became very frugal with age not investing in necessary repairs and renovations saying at one point that Sanssouci would only need to last during his lifetime. 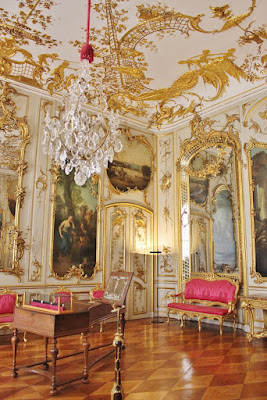 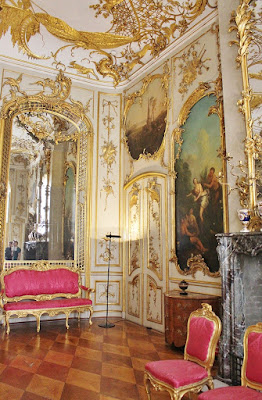 King Friedrich, or "Old Fritz" as he was called by the people, died on August 17, 1786, in the armchair in his study at Schloss Sanssouci. The King had wished to be buried at Sanssouci writing in his testament, "I have lived as a philosopher and wish to be buried as one, without pomp or splendour and without the least ceremony... I am to be buried by the light of a lantern at midnight on the third day after my death, without any procession, in the grave on the terrace of the palace, alongside my dogs..." 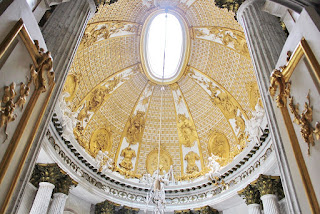 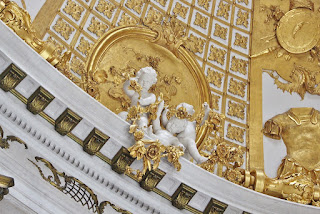 However, Friedrich's wish was not to be - at least for a long time. Only on August 17, 1991, exactly 205 years after his death, was his coffin ceremonially laid to rest in its intended location. At the time of his death, it was believed that such a humble grave was not fit for the man they called "the Great". He was first laid to rest at the Garnisonkirche (church) in Potsdam. During World War II, his coffin was brought to a disused mine to save it from bombs and later to Burg Hohenzollern in southern Germany. In 1991, it was decided that Friedrich the Great and his father would be moved back to Potsdam. 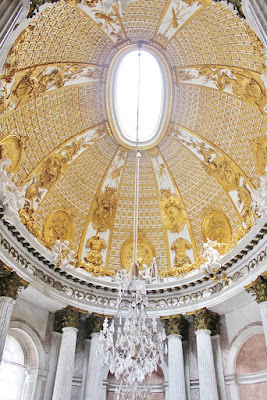 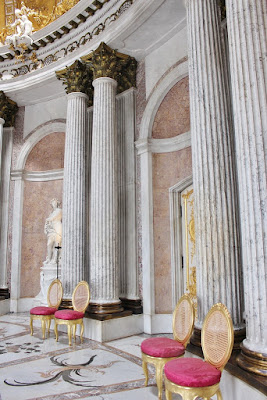 The reburial of "Old Fritz" was one of the most controversial acts after German reunification - after all Friedrich as well as his father were the masterminds behind Prussia's rise in military power. And the tradition of Prussian militarism - "Where some states have an army, the Prussian Army has a state", as Voltaire put it - was oftentimes blamed for the German acts of the first half of the 20th century that led to two world wars. So should reunified Germany really ceremonially honour two such kings? In the end, German chancellor Helmut Kohl participated in the burial as "a private citizen" though while "Old Fritz" was finally laid to rest where he wished to after dark, it was not entirely without pomp with the German army also in attendance forming a guard of honour and the TV cameras rolling. In the past about 30 years, attitudes have relaxed a bit and bringing a potato to Friedrich's grave has become a bit of a folk tale. 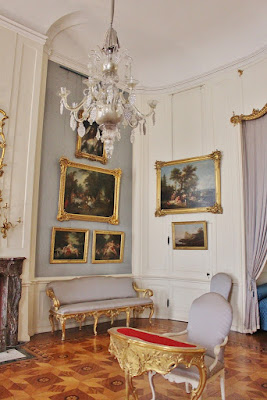 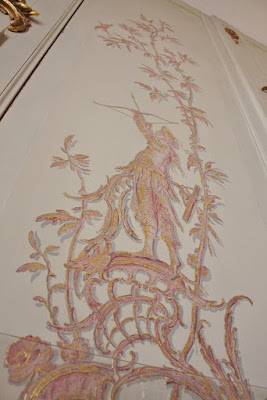 But back to the history of Schloss Sanssouci... Friedrich's successor Friedrich Wilhelm II favoured the Classicist style and built the Marmorpalais in Potsdam. He only lived at Sanssouci until the completion of his own palace. Still, he ordered the necessary renovation works "Old Fritz" had neglected. Friedrich Wilhelm III only used the palace rarely with his wife Luise and her sister Friederike spending a summer there when the King was in Poland. 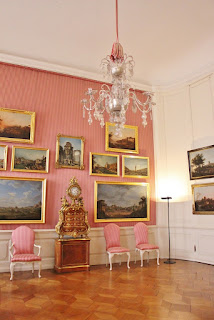 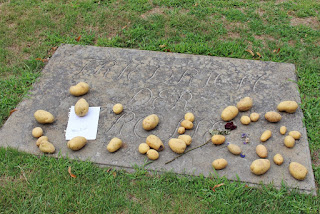 It was Friedrich Wilhelms IV who, almost 100 years after its construction, took a greater interest in Schloss Sanssouci. The King was an admirer of his ancestor Friedrich the Great and moved into the palace already during his time as crown prince. He transformed the palace from the retreat of his reclusive great uncle into a fully functioning and fashionable country house. The small service wings were enlarged between 1840 and 1842. Friedrich Wilhelm IV died at the palace in 1861. His widow Elisabeth Ludovika was the last royal to live in the palace staying there for a further almost 13 years until her own death in late 1873. 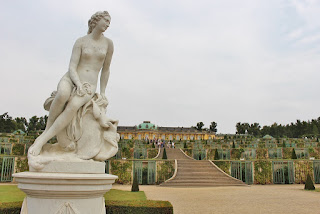 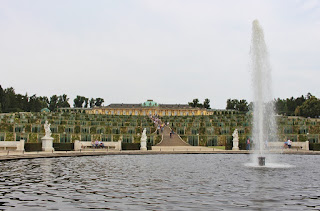 Soon after, Schloss Sanssouci was opened as a museum by Emperor Wilhelm I. The palace remained in the possession of the Prussian Hohenzollerns until the late 1920's when it was added to the "Verwaltung der Staatlichen Schlösser und Gärten" (Administration of National Palaces and Gardens). When air raids on Berlin began in the Second World War, the most notable works of art of the former imperial and royal palaces were brought to other more rural castles and mines. Luckily, Schloss Sanssouci was neither damaged during air raids nor during the subsequent ground fighting destroying much of Potsdam. Even during the years of the Socialist regime in East Germany, the Schloss fared quite well and was put on the list of World Heritage Sites in 1990, the year of reunification.

Good to know:
Information on when and how to visit Schloss Sanssouci here.
2018 Brandenburg Germany Hohenzollern Open Potsdam Prussia