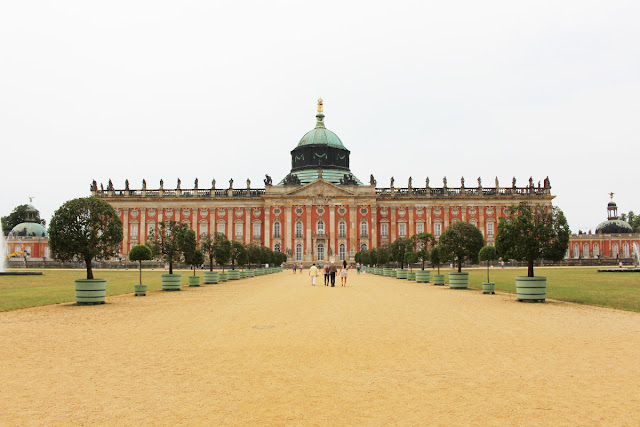 The Neues Palais, or New Palace, in Potsdam may neither be the most famous nor the most beautiful of the city's plentiful palaces, yet there is something incredibly fascinating about the place for it seems the one where it is easiest to meet history. If the walls of the palace originally built by Friedrich the Great could talk, they would have quite a story to tell. All that culminates in one of the first rooms you get to see when visiting the palace: Worn-out wall coverings, old masters, missing paintings, a graffiti by Soviet soldiers, a contrasting red Baroque chair - there are few places where you can get so close to the changing history of Germany. 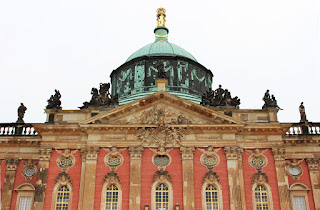 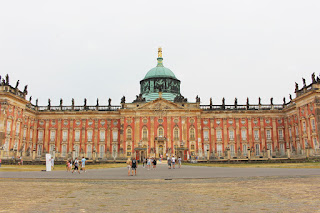 Like so many of Potsdam's palaces, the Neues Palais owes its existence to King Friedrich II of Prussia, better known as 'the Great'. In difference to his other palaces, Friedrich never intended to use the New Palace as a residence for himself but instead as a place to stay for his guests. While one of the last examples of Baroque architecture in Prussia, the architects also drew inspiration from Palladian-style architecture and buildings such as Castle Howard in North Yorkshire and the Trippenhuis in Amsterdam. 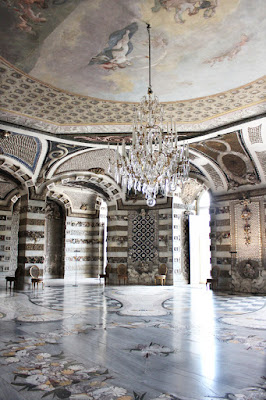 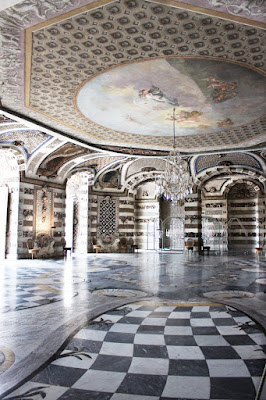 While Friedrich already had the idea for a new palace prior to the Seven Years' War, construction started only after the end of the war in 1763 to represent the power and glories of Prussia which rose to become one of the major European powers under Friedrich's rule. The King himself described the palace as a bravado to show off. 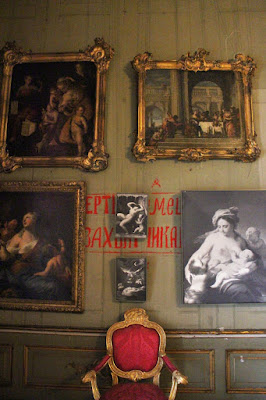 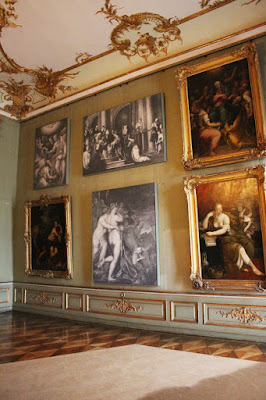 He commissioned architects Johann Gottfried Büring and Heinrich Ludwig Manger to erect a palace according to his wishes. Only a year after the start of construction, they resigned due to differences of opinion with the King and Carl von Gontard took over. Gontard mainly carried out the interior works as the elaborate facade was already finished at the time. With 220 metre east and west facades, the central part of the palace was crowned with a large dome adorned with the Three Graces on top holding the Prussian crown. In addition, over 400 statues adorn the facade. 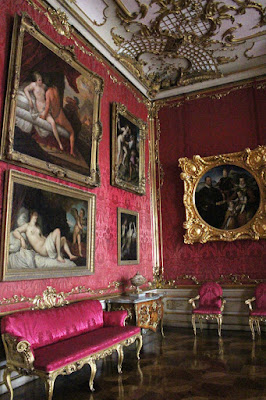 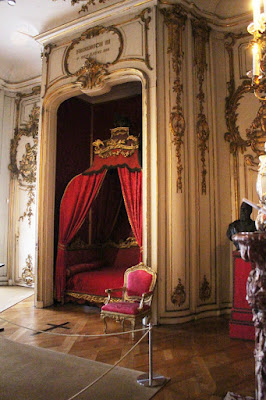 Even though one of the lesser known palaces of Potsdam, the Neues Palais is actually the city's biggest and grandest. Of the over 200 rooms, four principal gathering rooms, the Marble Gallery, the Marble Hall, the Grotto Hall and the Upper Gallery, as well as a theatre were available for royal functions, balls and state occasions. 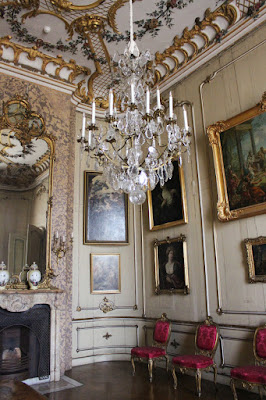 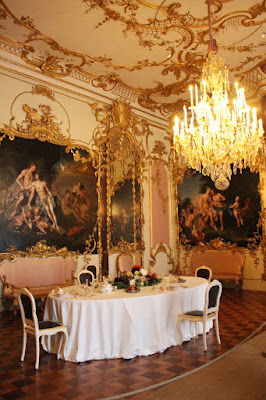 The New Palace was also home to several royals including several siblings of Friedrich the Great as well as his nephew and heir, the future King Friedrich Wilhelm II, all with their own apartments in different parts of the palace. Though he never stayed at the place for longer periods of time preferring nearby Schloss Sanssouci, Friedrich had a suite of rooms at the southern end of the building, composed of two antechambers, a study, a concert room, a dining salon and a bedroom, among others, arranged for himself. 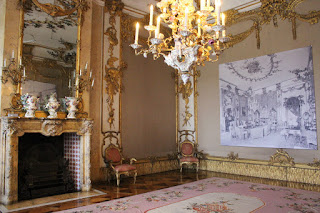 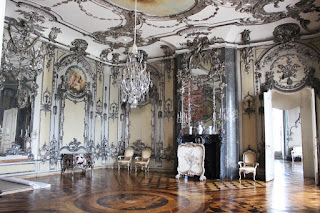 After the death of Friedrich in 1786, the Neues Palais was scarcely used as a residence or to entertain guests by the Prussian royal family. Life came back to the palace in 1859 when Crown Prince Friedrich Wilhelm, the future Emperor Friedrich III, started to use it as his summer residence. The New Palace was also the preferred place to stay for Friedrich III and his wife Empress Victoria, daughter of Queen Victoria and Prince Albert, during his short 99-day-rule before he died of cancer. During their time, the Neues Palais was officially referred to as Schloss Friedrichskron. 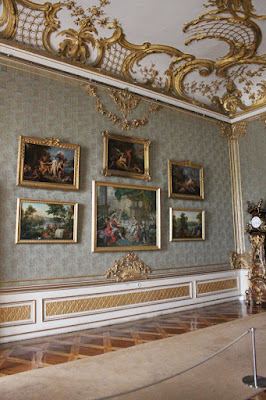 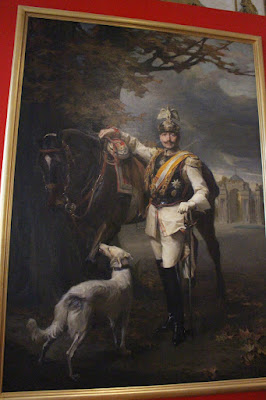 Friedrich's and Victoria's son, the last German Emperor Wilhelm II, also took a great interest in the palace, his childhood home. He had extensive renovation works carried out and steam heating and electrification installed also adding bathrooms in the state apartments and an elevator. Until 1918, the Neues Palais remained the preferred Potsdam residence of Wilhelm II and his wife, Empress Augusta. After Wilhelm's abdication, the new government allowed 34 train loads of furniture from the palace to be sent to the exiled Kaiser at Huis Doorn in the Netherlands. 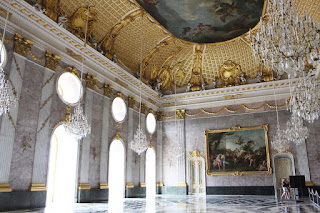 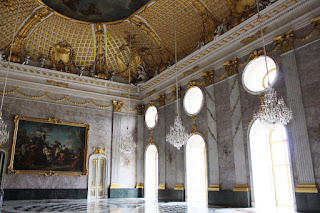 Subsequently, the New Palace was opened as a museum giving regular Germans a glimpse into the life of the former ruling family though especially the royal apartments were left virtually empty. Instead, the palace was partly redecorated to represent the times of Friedrich the Great. In the end, it turned to be a stroke of luck that much of the furniture had been removed after the end of the monarchy. While the Second World War was rather kind to the palace in genera, it was looted by the Red Army towards the end of the war with some of the art missing to this day. That is why you will find black and white copies hanging in some of the rooms. 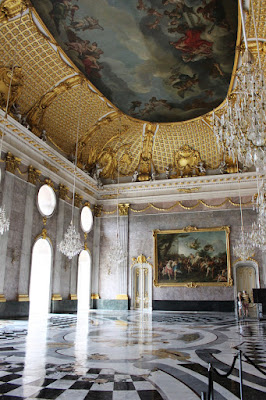 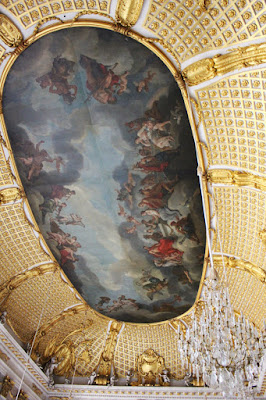 These days, the Neues Palais is one of the best-preserved Prussian residences in their original state. Sometime during the 1970s, the Dutch discovered much of the furniture brought to Huis Doorn still packed in their original crates and sent them back to Potsdam. As the Neues Palais also escaped bombing during World War II, the palace today looks much as it did in 1918. This year, there even is a special exhibition called Kaiserdämmerung (Dawn of the Emperor) about the New Palace between the monarchy and the Weimar Republic running till November.
2018 Brandenburg Germany Hohenzollern Potsdam Prussia