The Stuff Legends Are Made Of: The Mystery of the Amber Room 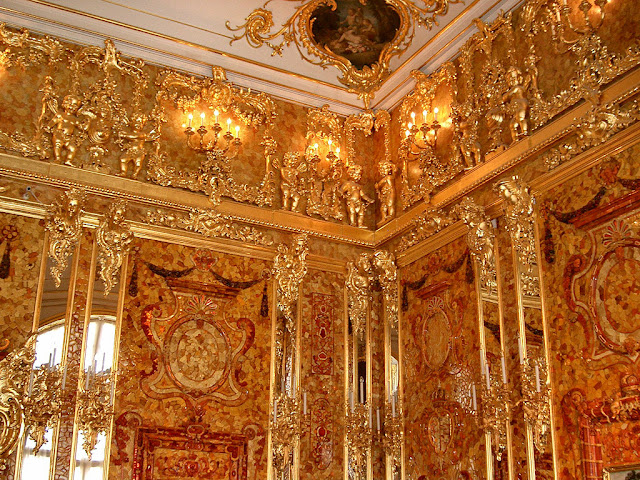 Few castles ever become legendary in themselves: Versailles, Neuschwanstein, maybe a handful more. Probably even fewer rooms of a castle share the same status and when German Baroque sculptor and architect Andreas Schlüter was commissioned to design a room made of amber for Schloss Charlottenburg in 1701, nobody knew what a legend it would become. Constructed by Gottfried Wolfram, master craftsman to the Danish court of King Frederik IV of Denmark, with the help of amber masters Ernst Schacht and Gottfried Turau from Danzig, the room wasn't even installed at its originally intended place but instead at the Stadtschloss in Berlin.

It was at the city palace where Tsar Peter the Great first lay eyes on the creation and liked it. Eager to please, King Friedrich Wilhelm I of Prussia, gifted the room to his Russian counterpart. In return, he got a Russo-Prussian alliance against Sweden as well as a bunch of really tall guys, yes literally, for his army. Pretty good deal, eh? Peter's daughter, Tsarina Elizabeth, had the room installed at Catherine Palace in Tsarskoye Selo, where the imperial family spent their summers. It was reworked and later expanded and covered more than 55 square metres and contained over six tonnes of amber. The panels were backed with gold leaf and historians estimate that, at the time, the room was worth around $150 million in today's dollars. However while people may have admired it, talked about it and called it an eighth wonder of the world, it wasn't until the fateful days of the Second World War that the Amber Room became stuff legends are made of.

On June 22, 1941, German forces launched Operation Barbarossa and invaded the Soviet Union. The German army quickly advanced. Very aware what the Germans would likely do to the invaluable treasures of Catherine Palace and the others palaces of Tsarskoye Selo, at the time known as Pushkin, and St. Petersburg, at the time known as Leningard, the curators tried to remove as much artworks, furniture and artifacts as possible in the one and a half months before the arrival of the German Wehrmacht. The Amber Room, however, was considered too fragile to be moved easily. When they tried to remove the panels from the walls, the amber started to crumble. So instead, it was decided to cover up the walls with cotton and wallpaper in the hope that the Nazis wouldn't find it and leave it be.

That, however, was a hope in vain. Within three days after the invasion of Pushkin, the German troops had found the Amber Room and soldiers of Army Group North disassembled it under the supervision of two experts. Packed up into 28 crates, the Amber Room was transported to Königsberg, nowadays known as Kaliningrad, the old coronation city of the Prussian monarchy. It arrived on October 13, 1941, and was put up for display for the following two years at the Königsberger Schloss. After a fire in one of the exhibition rooms of the castle in 1944, the Amber Room was packed up once again and the crates stored in the cellars of Königsberg Castle - and never seen again. It is not even sure how long it remained in Königsberg where it was last seen.

Was it destroyed? Who took it? Where is it now? All good questions, the answers to which we do not know. Of course, there are theories, about a dozen or two in fact, but nobody knows for sure. And while the mystery of and the search for the Amber Room still makes for good headlines every couple of years, no one has been able to come up with a definite answer yet. So, what are the most popular theories?

Theory 1: The Amber Room was packed up and loaded onto a ship heading for (ports closer to) the German heartland. Eyewitness reports claim that it was loaded onto the Wilhelm Gustloff, a German ocean liner that was sunk by a Soviet submarine on January 30, 1945. An estimated 9,000 passengers were killed in the sinking, making it the greatest maritime disaster in history. Maybe the Amber Room lies on the ground of the Baltic Sea after going down with the Gustloff or another German ship sunk during the final days of World War II?

Theory 2: Is actually a whole bunch of theories that claim that the Amber Room is hidden somewhere in Germany, Poland, Bohemia or the Baltic States. With the tides of history changing and Soviet troops advancing towards Germany, Adolf Hitler ordered in January 1945 for all looted art to be moved to Germany. The Nazis were very creative with hiding stolen art, there are a great number of mines and bunkers, for example, where treasures were stored away for keep safe. These theories are especially popular with treasure hunters and while numerous searches have been carried out in the years since the Second World War, nothing ever came out of it.

Theory 3: The Amber Room was destroyed. Königsberg was first heavily fire bombed by the Royal Air Force in August 1944, then it was captured by the Red Army on April 9, 1945, with heavy fighting and artillery fire taking place in the days before. During these final weeks of the war, large parts of Königsberg Castle were destroyed. A Soviet report dated post-WWII and later at least partly retracted (as to diminish a possible Soviet role in the destruction of the Amber Room) states that it was likely destroyed between April 9 and April 11. In 1968, the remains of Königsberg Castle were removed on the order of Leonid Brezhnev making any on site research void.

If you research further, you will actually find a whole bunch of additional and variations of these theories, including that the Nazis destroyed the Amber Room either by accident or on purpose before the surrender of Königsberg, or that the Soviets made the Amber Room disappear as to use its loss as a Cold War propaganda tool. In the 1990's two mosaic panels and a chest of drawers from the famous ensemble were found in Germany and returned to Russia. However, the fate of the rest of the amber collection is still unknown - and while the fate of the original Amber Room will likely forever remain a mystery, there is a reconstruction to be found at Catherine Palace.

The decision to rebuild a replica of the Amber Room was taken by the Soviet government in 1979. Based on original drawings, black-and-white photography as well as the only coloured photograph available of the room, plans for drawn up to have the replica resemble the original Amber Room as closely as possible. In the end, it took about a quarter of a century, several dozen Russian and German experts on amber craftsmanship, an art nearly lost since its original construction, and a large donation by a German energy company in the 1990's to complete the reconstruction. In 2003 on the occasion of the 300th anniversary of St. Petersburg, Russian President Vladimir Putin and German Chancellor Gerhard Schröder, in the presence of several other European heads of state and government, officially reopened the Amber Room.