If you have been a regular follower of Confessions of a Castleholic over the past couple of years, you could have gotten the impression that the modern German state of Lower Saxony comprises only of former Guelph territories. While large areas of the current federal state were indeed part of the former Kingdom of Hanover or Duchy of Brunswick, there are two other former monarchies making up today's Lower Saxony: The small Principality of Schaumburg-Lippe around Bückeburg as well as the much larger Grand Duchy of Oldenburg. During the days of the monarchy, today's Schloss served as the main residence of the Counts, Dukes and finally Grand Dukes. 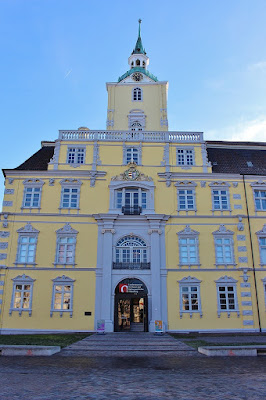 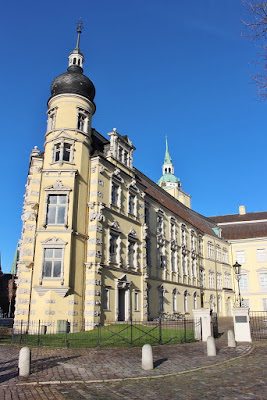 The earliest castle on the same spot as today's Schloss dates back to around the year 1100. It was built by the Counts of Oldenburg to control a trading route between Westphalia to the south and East Frisia to the north of Oldenburg. Due to the swampy grounds, the castle was based on stilts. During the course of the 15th century, a moat was added around the castle to increase its defensive purposes. The moated castle included several living quarters and agricultural buildings housing some 350 people around the year 1600. 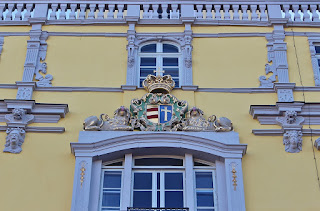 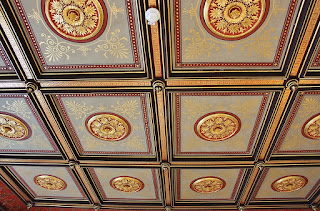 The oldest parts of today's Schloss can be traced back to the beginning of the 17th century. It was Count Anton Günther of Oldenburg, the last of the House of Oldenburg, who commissioned the construction of a new residence befitting his status. Inspiration for the new four-winged castle was drawn from the Renaissance-style city palaces of Italy. The first stone was laid in 1607 under master-builder Anton Reinhardt. His position was later taken by Italian architect Andrea Spezza. Sculptor Ludwig Münstermann was the main contributor to the facade's Renaissance-style appearance. 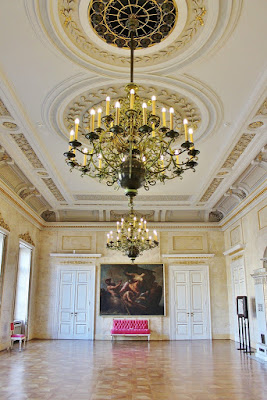 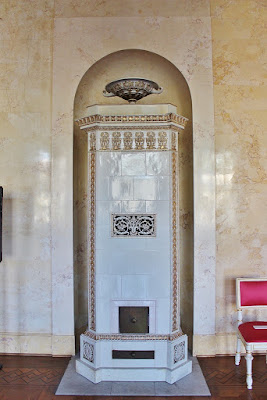 Construction on the new Schloss was halted when the Thirty Years' War ravaged Europe. While Count Anton Günther famously managed to keep his County above the fray during the war by implementing a clever policy of neutrality (and occasionally bribes to keep foreign troops away), the funds were needed elsewhere. Much adored by his people, Anton Günther died in 1667 after ruling the County of Oldenburg for more than 60 years. However, his marriage to Princess Sophie of Schleswig-Holstein-Sonderburg had remained childless and there were no other male heirs within the family. 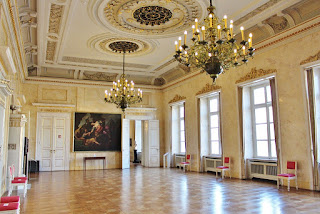 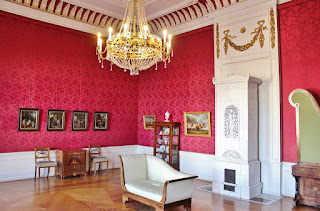 For that reason, Count Anton Günther willed that the County would pass to the King of Denmark, who was a descendant of a senior line of the House of Oldenburg, and the county was ruled in personal union. However, Oldenburg was of little importance to the Kings of Denmark and consequently became somewhat of a backwater. The county was officially administered by the German Chancellory in Copenhagen that also managed the Duchies of Schleswig and Holstein and a governor resided in the castle. 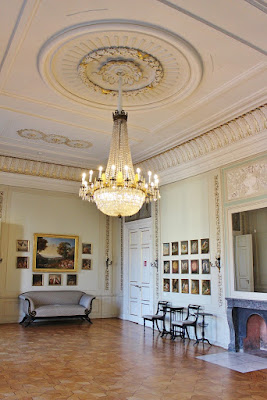 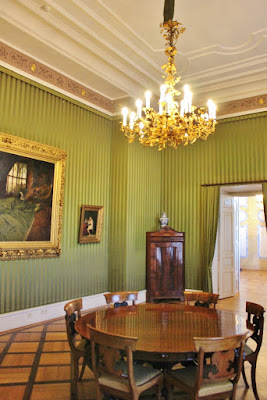 Towards the beginning of the 18th century, the last remnants of the medieval castle were removed because they had fallen into disrepair. At the time, the moat surrounding the castle was filled in again. In 1744, a simple building was added to the castle by the Danish to house the administration of the County. The tides for Schloss Oldenburg and the whole County turned during the second half of the 18th century when on August 27, 1773, the Treaty of Tsarskoye Selo, a territorial and dynastic treaty between the Russian Empire and the Kingdom of Denmark, was signed. The treaty transferred control of Schleswig-Holstein to the Danish crown in return for Russian control of the County of Oldenburg and other lands within the Holy Roman Empire. 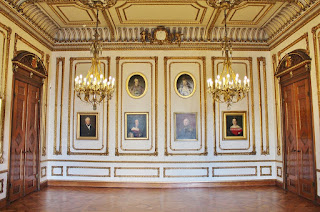 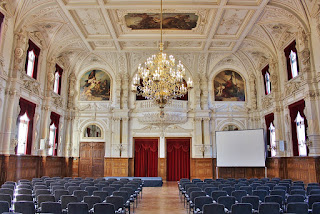 Four days later, the future Tsar Paul I, at the time also Duke of Holstein-Gottorf, gave the County to his relative Friedrich August, Prince-Bishop of Lübeck, who, in turn, was created Duke of Oldenburg by the Holy Roman Emperor. New construction plans for Schloss Oldenburg were drawned up almost immediately because the new Duke needed a castle befitting his new status. Construction started in 1775. 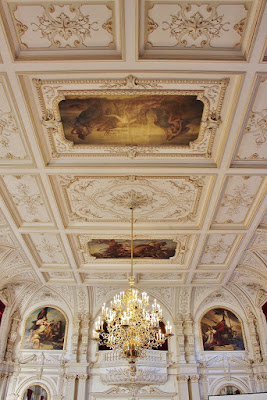 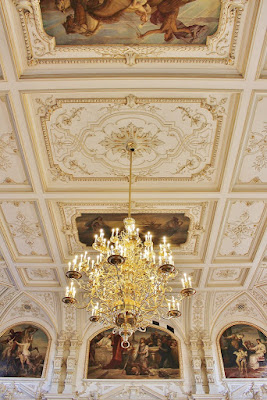 Starting in 1817, (Grand) Duke Peter Friedrich Ludwig modernised the interior of the castle with the help of Classicist architect Heinrich Carl Slevogt. He also added a further wing housing the kitchen and a new large library. While this wing later burned down during a fire in 1913, it was immediately rebuilt in its original form. 1894 saw the construction of another new wing in place of the one added during the Danish rule of Oldenburg in historistic style expanding on the facade Count Anton Günther had once created. The most prominent room added during this time? The Neo-Renaissance style ceremonial hall you can admire in the pictures above. 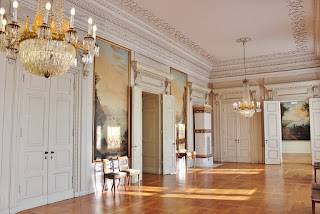 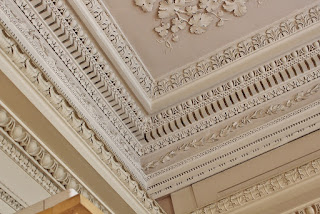 At the time of this last major construction period, Schloss Oldenburg was home to Hereditary Grand Duke Friedrich August, the future Grand Duke Friedrich August II, and his family. While usually used as the residence for the head of the family, his father had chosen to live at the nearby Prinzenpalais. It was also Friedrich August who was the last Oldenburg to live at the castle. He abdicated as Grand Duke following the November revolution in 1918. Following the end of the monarchy, Schloss Oldenburg came into the possession of the state. (The Oldenburgs were allowed to keep Schloss Rastede and the Erbprinzenpalais.) 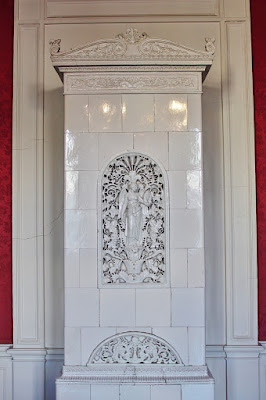 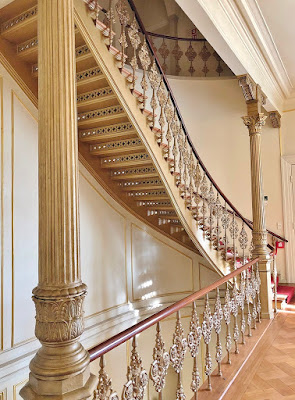 In 1923, the Oldenburg State Museum for Art and Cultural History was opened at the castle with other parts of the museum housed at the Prinzenpalais and Augusteum nearby. In addition to the former state rooms - most of them deprived of their original furnishings - the museum also tells the history of what is called the Oldenburger Land in German nowadays and was once known as the Grand Duchy and later the Free State of Oldenburg before it became part of today's Lower Saxony, which pretty much brings us full circle to the beginning of this post. And on a last and personal note: I totally fell in love with that cast iron staircase above. Where can you buy those (and houses befitting one)? #AskingForAFriend
2019 Germany Lower Saxony Oldenburg (family) Open