August 28, 2022
* This post is part of a paid partnership with the cities of Weissenfels, Merseburg and Zeitz. * 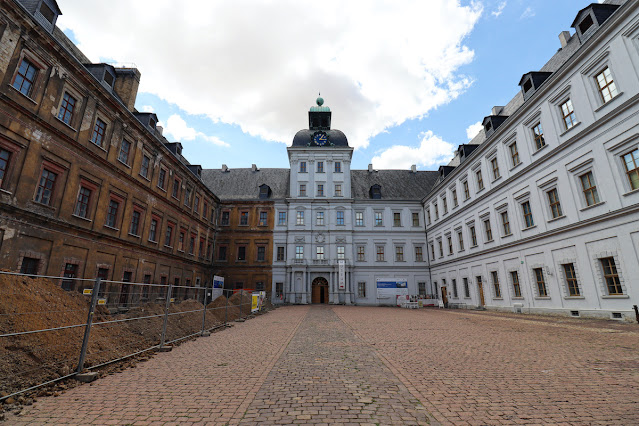 Weissenfels, deep in the heart of Saxony-Anhalt, is a city full of contradictions. Old vs. new, fallen into ruins vs. beautifully restored. All of this is represented most in the castle towering high above in the town south-west of Leipzig: Schloss Neu-Augustusburg. While half of it, at least from the exterior, shines in new splendour, the other half is falling into ruins. It is a fascinating contrast you will find all over this historically rich little town. Once the residence of the Duchy of Saxe-Weissenfels, it later became the number one shoe-manufacturing city of the German Democratic Republic. As so many places, the aftermath of unification left a lasting mark on Weissenfels with many especially young people moving away to find work elsewhere, and houses left empty. But you will find as many rays of hope here, so let's delve deeper into the things not to miss when visiting Weissenfels. 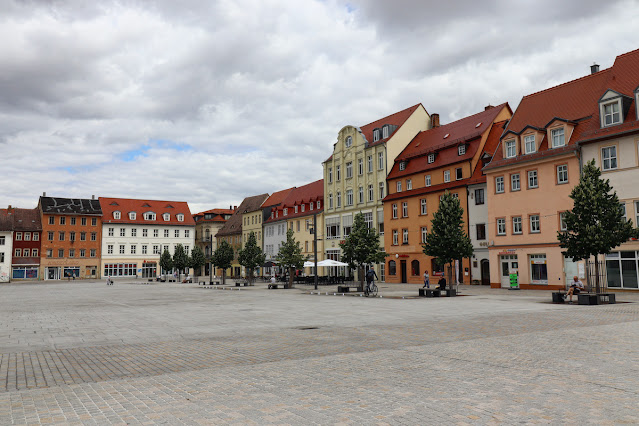 Whether you arrive in Weissenfels via train or car, it's best to start any tour of discovery of the city in the town's market square or Marktplatz in German. The spacious area lies a stone's throw from the local train station and is surrounded by a variety of historical buildings including the town hall, not pictured above because it's currently being renovated and your's truly can never escape the scaffolding. You will also find the tourist information here, where a variety of guided tours start. I much recommend them to learn more about Weissenfels and it's fascinating history. 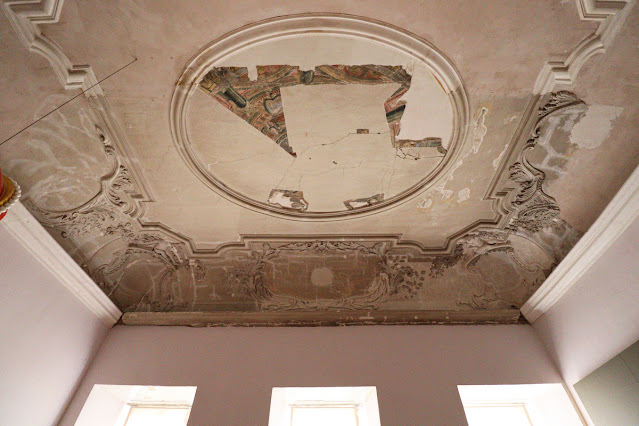 From the market square you can already see Schloss Neu-Augustusburg lying high above a hill overlooking the city. Unfortunately, the former residence of the Dukes of Saxe-Weissenfels, a secundogeniture of the Albertine line of the House of Wettin, is a shadow of its former self. So you have to use your imagination to get an idea how it once looked when the royals still roamed its halls. Built during the late 17th century, Schloss Neu-Augustusburg is one of the earliest examples of Baroque architecture in Germany. Remnants of its splendrous former interior decorations are few and far in between, but you can spot some as you can see in the picture above. Weissenfels seized to be a residential town during the mid-18th century when the ducal line died out and usage of the palace has been diverse since, to say the least. In addition, the Schloss sadly has major structural problems. As a precaution, a suite of rooms that until recently showed an exhibition about the history of Neu-Augustusburg and the Baroque cultivation of home decor, that includes above's room, is currently closed. 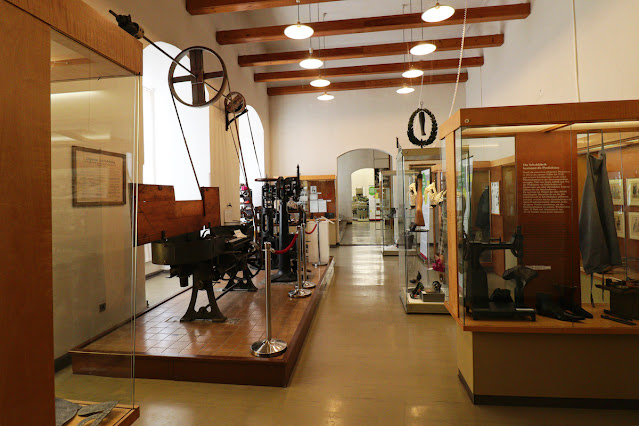 But thankfully Schloss Neu-Augustusburg has several more wings - and a stunning surviving Baroque pearl we will get to in a moment. But first: The Shoe Museum. Remember that I wrote in the beginning that Weissenfels was once the biggest shoe-manufacturing city in East Germany? The Shoe Museum pays tribute to that time and far beyond. Here you can learn more about shoes that you ever thought you needed. Actually already opened during the days of the German Democratic Republic, the museum is a bit of a curiosity and feels like a glimpse into museum culture and ways to educate people of days gone by. There are plans to renew it but they also intend to keep parts of the old museum to teach museum educators how museum used to educate. 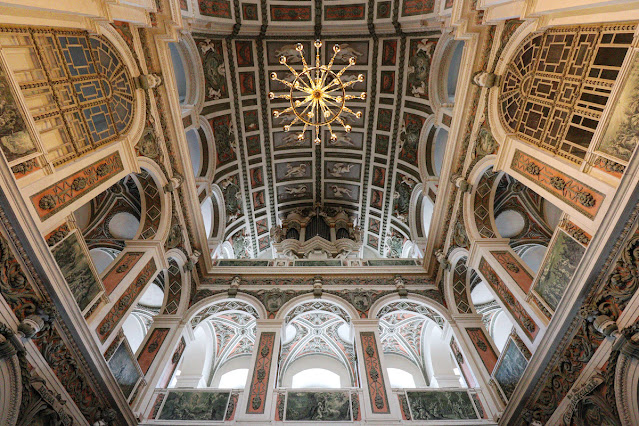 Hallelujah! Hallelujah! Hallelujah! Hallelujah! Ha-lle-lu-jah! Did you think you would find such a Baroque gem at Schloss Neu-Augustusburg? You may be forgiven for not expecting that after the first few pictures of this palace. The castle church of St. Trinitatis survived to this day in all its original glory. It's a Protestant-turned Catholic-turned Protestant church that has seen a variety of very famous musicians. The musically inclined among you may have noticed that the beginning of this paragraph didn't only allude to a religious theme in general but to Handel's Messiah in particular. It was actually here that the talent of young Georg Friedrich was first discovered when he played the organ, his father being the court physician of the Dukes of Saxe-Weissenfels. 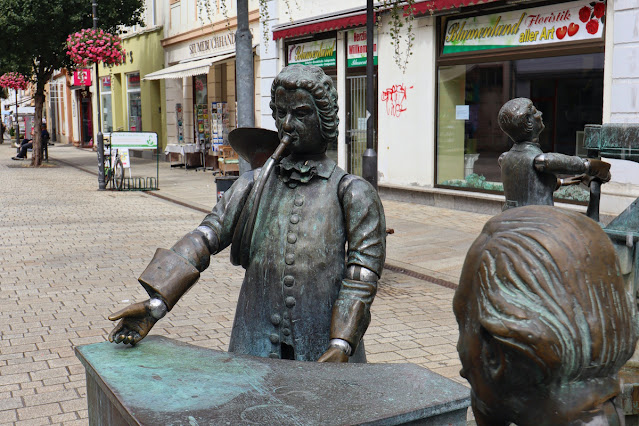 Speaking of Baroque and music... The OG of classical music that is Johann Sebastian Bach was here as well. In 1713, to be precise for some ducal birthday celebrations. As one does when one is a composer, he also brought a gift: His very first (surviving, at least) secular cantata, known as the Hunting Cantata, composed in honour of the 31st birthday of Duke Christian of Saxe-Weissenfels. This visit and cantata merited Bach a portrayal in the Stadtbrunnen fountain you can find in the Jüdenstrasse. Opposite him is another Baroque composer, Heinrich Schütz. 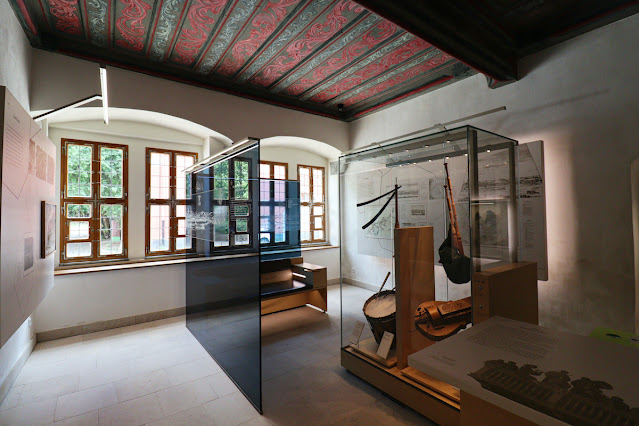 In fact, Schütz isn't just another Baroque composer. He is generally regarded as the most important German composer before Johann Sebastian Bach - and he once called Weissenfels his home. Schütz has connections to many towns in the area but it was here where he chose to spend to last years of his life in a house opposite where his family used to run a tavern. Today said house is a museum, the Heinrich-Schütz-Haus, giving an insight into his life and work. The museum is quite the contrast to the Shoe Museum above. It's super new, super modern - and a great way to learn about Schütz and the beginnings of Baroque music in Germany. 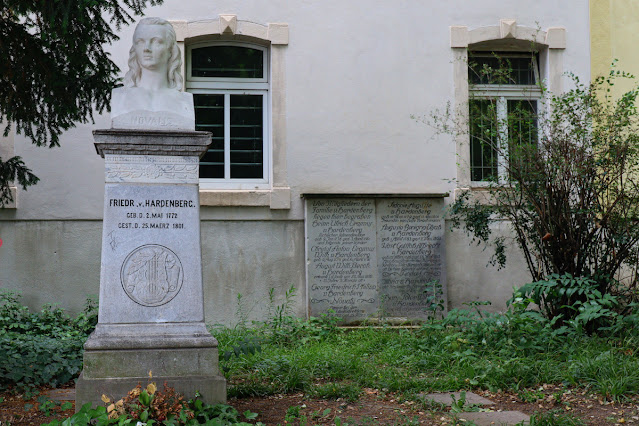 But Weissenfels cannot only boast a couple of very famous musicians but also a very literary connection. If you don't instantly recognise the name Friedrich von Hardenberg, that's fine. Novalis, his pen name, may be more familiar to you. At least if you have ever read anything about German literature of the Romantic age. Novalis was a German poet and thinker and one of the fathers of Romanticism in Germany; his blue flower being the symbol for the yearning the Romantics felt. It was in Weissenfels where he lived and his untimely death occurred. You can find a memorial for him, the Novalis-Gedenkstätte, in the Stadtpark. 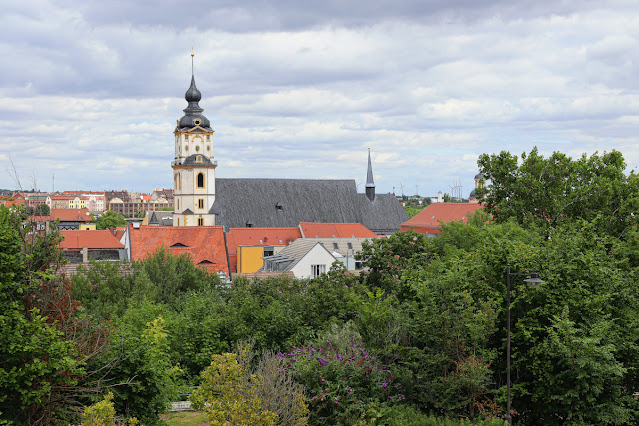 While in the Stadtpark, make sure to stroll around a bit. It's also a great spot to take a break and enjoy the greenery. Make sure to stop by the Stadt- or Schusterjunge, a statue of a young boy opposite the Novalis-Gedenkstätte. Near the Pulverturm, the old magazine, you will find several nice views over the surrounding area including a different angle of Schloss Neu-Augustusburg as well as the old town of Weissenfels, including the St. Mary's Church (Marienkirche). 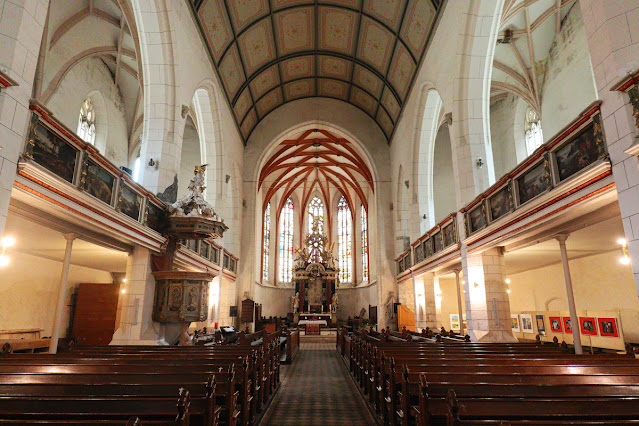 Speaking of Marienkirche... I also much recommend catching a glimpse of the interior. The late Gothic three-aisled hall church forms part of the market square and lies right next to the town hall. Consecrated in 1303, it was renewed several times after fires. The church tower was rebuilt in Baroque style after a one of them in 1718. For a time, the town church also functioned as a representative court church. The most important furnishings also date from this time. 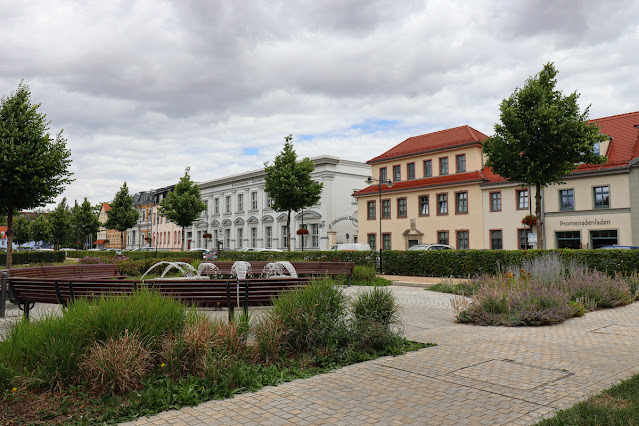 If you still have a bit more time while in Weissenfels, I also suggest you to visit the Promenade nearby. The street as well as the one you pass when walking over there from the market square has been recently restored. It forms a great contrast to some of the debilitated houses you find in other areas of the city - but hopefully a sign of the great things and restorations to come! While at the Promenade, you can catch a good lunch or dinner at Schumanns Garten, a restaurant and hotel in one of the restored houses where I had some of the tastiest food while visiting Weissenfels, Zeitz and Merseburg.
P. S. Need a place to stay? I made the Best Western in Merseburg my base camp for the weekend that took me to Merseburg, Weissenfels and Zeitz. Conveniently located close to the main station, it is a great starting point to discover the history, culture, architecture and nature of the region - and it even offers a great view over the old town of Merseburg itself.
Burgenlandkreis Germany Hardenberg Saxony (family) Saxony-Anhalt Wettin