East of Berlin: Six Castles to See on a Day Trip from the German Capital

April 17, 2022
Historically speaking, Berlin wasn't your prime European metropolis along the lines of Paris or London for many centuries. A frugal backwater somewhere in the north of the German-speaking nations, it only gained prominence during the mid-18th and 19th century. After the unification of Germany in 1871, Berlin became the new capital of the Prussian dominated German Empire. It was also the time of the industrialisation of Germany and so around the same time, a lot of noble homes started to spring up all around Berlin. Today, I'm taking you to six of those in the Oder-Spree administrative district east of Berlin. All of them can be easily reached on a day out from the German capital. 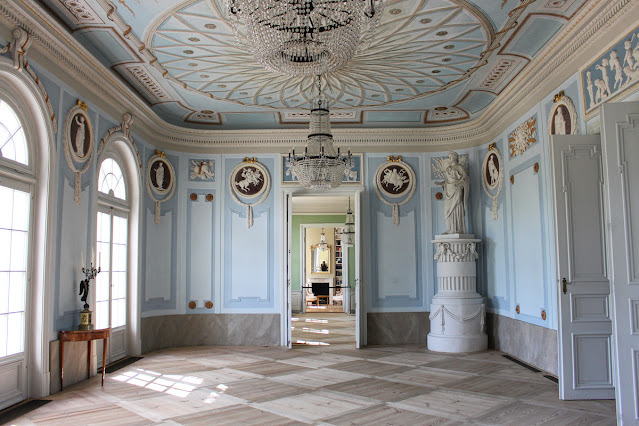 The star of the show of today's post undoubtedly is Schloss Neuhardenberg. The originally Baroque palace was redesigned in the Neo-Classical style for Chancellor Karl August Prince of Hardenberg by no other than Prussia's most famous architect Karl Friedrich Schinkel. The Schloss had been gifted to Hardenberg by King Friedrich Wilhelm III of Prussia. Literally called New Hardenberg - the old Hardenberg can be found in Lower Saxony - is perhaps best-known in modern days as a meeting place of the conspirators of the 20 July plot to kill Hitler. Its owner at the time, Carl Hans Count of Hardenberg was subsequently imprisoned in a concentration camp and dispossessed of all his estates. The expropriation was confirmed by the Soviet authorities and the small town renamed into Marxwalde to get rid of the noble connections. Only after German reunification, Schloss Neuhardenberg was reinstated to the Hardenberg heirs who sold it to the German Sparkasse. Today it is used as a museum and hotel. Don't forget to also visit the nearby Schinkelkirche, a small church also designed by - you guessed it - Karl Friedrich Schinkel. 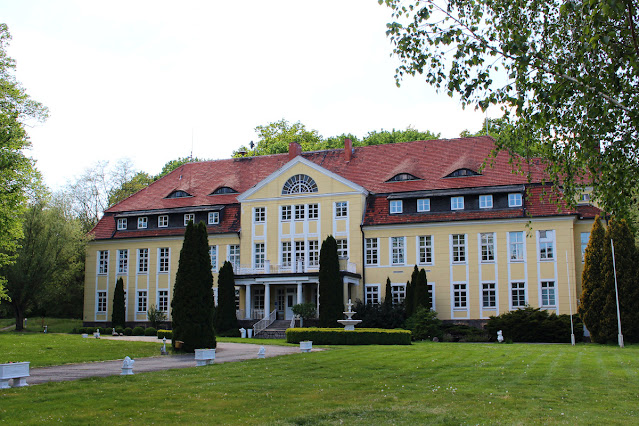 Today a hotel, Schloss Wulkow owes its current appearance to Carl Otto Magnus von Brünneck. A Prussian military officer, who inherited the estate in 1825. Starting in 1868, a representative Neo-Classical palace was built instead of a former smaller noble home. Apparently, the Schloss boasts an impressive Art Deco-style staircase though I wouldn't know because I visited during one of the many lockdowns there were when hotels were closed. 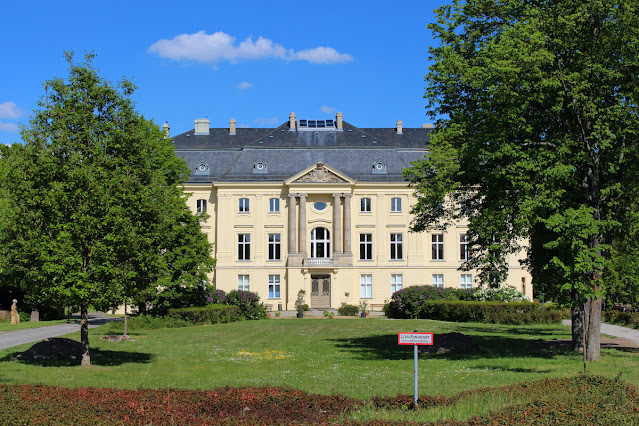 Why own one palace if you can own two? With Schloss Trebnitz we are heading from two Neo-Classical palaces to a Neo-Baroque one that was also owned by Magnus von Brünneck, who came into its possession in the early 19th century. The descendants of the twice-mentioned Magnus rebuilt the original estate home consisting of five axes into a much larger eleven-axes palace. The works were carried out between 1904 and 1910. The Barons of Brünneck owned Schloss Trebnitz until 1945. During the times of the German Democratic Republic, it served as a school. In 1992, it became a centre of education which it remains to this day. 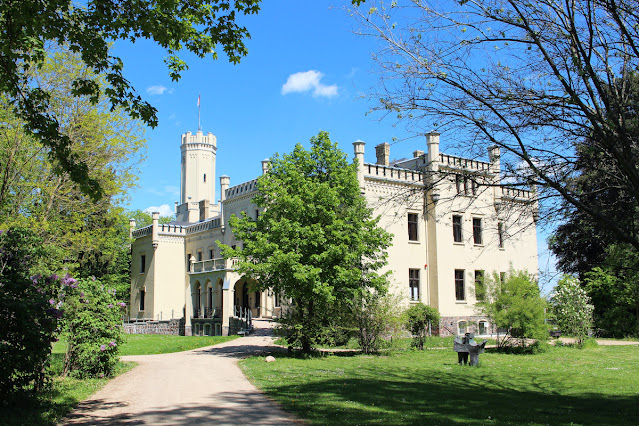 The most fairytale-ish of today's castles? Without a doubt Schloss Reichenow. Commissioned by Baron August Friedrich von Eckardstein for his son Ernst Julius, this former noble home was built between 1897 and 1900 in the British Neo-Gothic Tudor style. The family - originally rich industrialists ennobled by King Friedrich Wilhelm III - had owned the estate Schloss Reichenow is situated on since 1801. Around the turn of the century, they assigned architect Gerhard Hauer to build a new home for their heir. Hauer took inspirations from the royal family's Schloss Babelsberg, among others. Today, Schloss Reichenow is also used as a hotel. 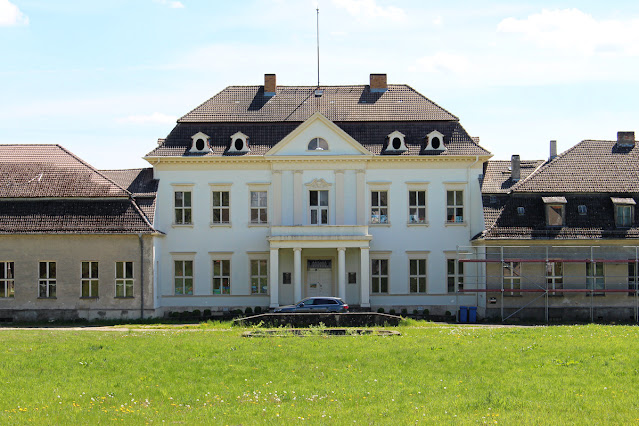 And whatever old nobility can do, industrialist upstarts can do too: And so Schloss Prötzel is the second palace owned by Barons of Eckardstein on today's list. Built for Paul Anton von Kamecke, Lord High Chamberlain to King Friedrich I, in 1712 as a representative country house, they purchased the palace in 1801 after their ennoblement. Originally a Baroque palace, Schloss Prötzel received a Neo-Classical make-over during the 1860's to better suit the tastes of the time. But because those tastes changed quickly, there was another make-over in Neo-Baroque style in 1924. During East-German times, the Schloss was used by the local municipality. After reunification, it stood empty for many years. Now it is privately owned and - as you can see - at least the facade looks much better again than it used to. 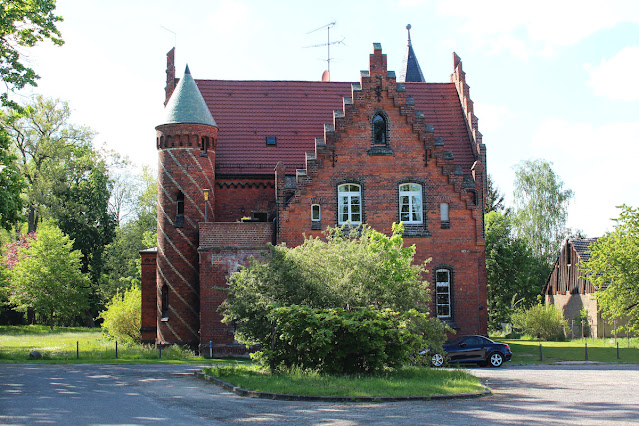 The history of the village of Jahnsfelde has long been intertwined with that of the Counts of Pfuel who came into the possession of the estate Schloss Jahnsfelde stands on in 1449 and remained the owners until 1945. The oldest surviving parts of today's castle date back to the 17th century. During the course of the 19th century, the Counts of Pfuel redesigned and expanded their home on a number of occassions. In 1831, the existing structure was rebuilt in Neo-Classical style, two brick addition in Neo-Gothic style made around the year 1871. After being used as a home for people with intellectual disabilities for many years, Schloss Jahnsfelde was sold a couple of years ago and is now privately owned. 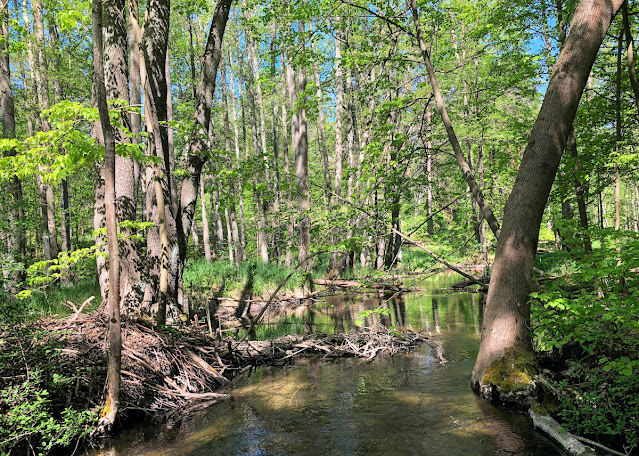 How to combine it? As many of the aforementioned palaces and castles aren't actually open to the public, here are a couple of tips what else you can do in the area. Why not enjoy some of the beautiful nature such as the so-called Märkische Schweiz or one of the many lakes? In Buckow, you will also find a bit of culture as it houses the summer home of one of Germany's most famous 20th century writers Bertolt Brecht. You also shouldn't miss Ihlow, one of the most picturesque Brandenburg villages I have ever encountered.
Brandenburg Brünneck Eckardstein Germany Hardenberg Oder-Spree Pfuel