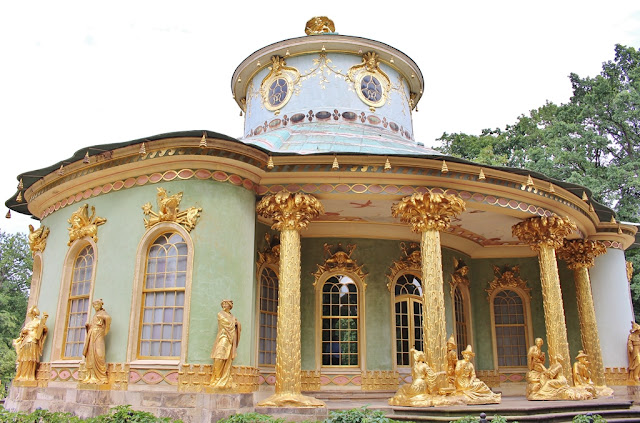 Do you remember that I was struggling to calculate the number of castles I visited in 2018 due to various reasons including a fancy garden house? Well, here it is! And was I right or was I right?! The Chinese House, also sometimes called Chinese Tea House, is a garden pavilion in Sanssouci Park in Potsdam not far from the palace of the same name and a fancy one it is. 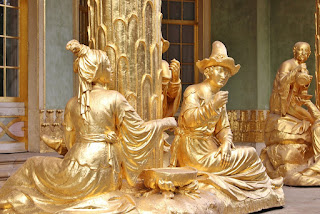 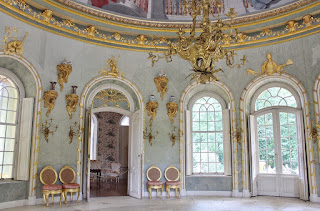 The Chinese House owes its existence to King Friedrich II of Prussia, famously known as 'the Great'. The King commissioned Johann Gottfried Büring to design an ornamental garden house to adorn his gardens about 700 metres southwest of Schloss Sanssouci. For his designs Büring borrowed ideas from the Rococo architecture favoured by the King and took inspiration from Chinese architecture. Chinoiserie, a European interpretation and imitation of Chinese and East Asian artistic traditions, was popular at the time. The Chinesisches Haus was modelled after the Le Tréfle garden pavilion in the grounds of Château de Lunéville in France. 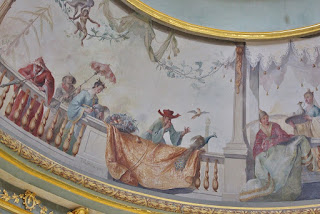 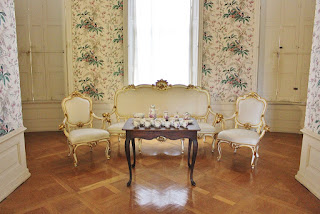 Construction of the Chinese House started in 1755 and took nine years to complete. The unusually long building time was due to the Seven Years' War, which drained the Prussian finances. Only after the end of the war in 1763 the chambers inside the pavilion were furnished. Friedrich the Great commissioned sculptors Johann Melchior Kambly, Johann Gottlieb Heymüller and Johann Peter Benckert to create the many sculptures adorning the house's exterior. Interestingly, people from the area stood as models for the eating, drinking and music-making Chinese figures, which probably explains the statues' slightly European features. 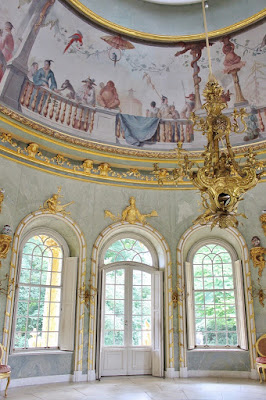 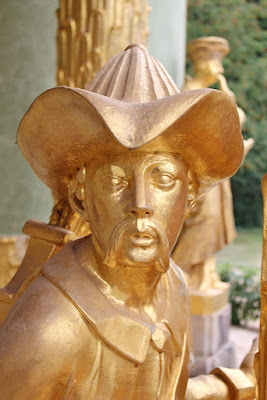 Even though it certainly is pretty to look at, the Chinese House did not only serve as a decorative garden feature but was also used by the King as a place for small gatherings and social events. He thus ordered the construction of a Chinese Kitchen nearby to better host his guests. After a conversion in 1789, however, only the hexagonal windows show the Oriental character of the former outbuilding, which I must admit I missed while visiting. Mind you, I went there on the way back from seeing not one but five palaces in Potsdam that day so I think I may be excused for my slight castle fatigue and lack of attention.
2018 Brandenburg Hohenzollern Potsdam Prussia