July 25, 2018
An eternal mystery I want to remain, to myself and others.
These may just be the most famous words written by no other than King Ludwig II of Bavaria, alternatively known as the Mad King, the Fairytale King or the Swan King and the mastermind behind some of the world's most famous castles including Schloss Neuschwanstein, Schloss Herrenchiemsee and Schloss Linderhof. Ludwig was King of Bavaria from 1864, ascending to the throne at the age of 18, until his death in 1886. Over time and after Bavaria became a part of the  newly founded German Empire, he withdrew from public life in favour of extravagant artistic and architectural projects. Was he eccentric? Certainly. Was he mad? Who knows. 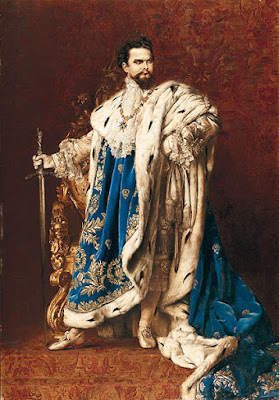 Through his various buildings projects, Ludwig II had amassed a great personal debt and though he never used state funds for the construction of his dream palaces, he was a thorn in the side of his ministers. They decided that declaring their King mentally insane would be the easiest way to get him out of the way. They approached Ludwig's uncle, Prince Luitpold, to step into the royal vacancy once Ludwig was deposed. Luitpold agreed, on condition the conspirators produced reliable proof that the king was in fact helplessly insane - and that, they did. Even though their methods were fairly questionable.
Based on hearsay, gossip, bribes and the unusual behaviour the King did show, a medical report was written and signed by a panel of four psychiatrists none of whom had ever actually examined the King and in many cases not even met him. The report declared Ludwig to suffer from paranoia and  that he was thus unfit to rule. He was deposed on June 10, 1886, and while his younger brother Otto became King, the power effectively lay in the hands of their uncle Prince Luitpold, who became known as the Prinzregent (prince regent), as Otto was mentally unfit to rule as well.
King Ludwig's body was found three days later in the shallow waters on the shore of Lake Starnberg  in southern Bavaria alongside that of Bernhard von Gudden, one of the psychiatrists who had never examined him but declared him insane. The two had been out and about for a walk together and when they didn't return on time, a search party began. Ludwig's death was officially ruled a suicide. However, the official autopsy report indicated that no water was found in his lungs, while Gudden's body showed blows to the head and neck and signs of strangulation.
Why I am telling you all of this? Since his death, King Ludwig II has probably become the most famous and admired of all German monarchs. His three castles, Neuschwanstein, Herrenchiemsee and Linderhof, form an integral part of what makes Bavaria the most visited tourist destination in Germany - and thus Ludwig his hardly left to rest in peace. Like clockwork, a new book or documentary will turn up every year or two claiming to bring new evidence into the life and death of the King. Just the other day, I found an article titled "Doubts grow over 'suicide' of Bavaria’s fairytale king" with new alleged prove.
It has long been suggested that Ludwig did not attempt suicide but either died of natural causes, during an escape attempt or that he was murdered - the last one being the most common theory. Different sources have since indicated that there was a cover-up to hide the fact that both Ludwig and Gudden were shot. As long as the Ludwig's body isn't exhumed and examined - and sincerely hope that this will never happen - no one will ever know the fate of the Swan King. There is also constant discussion about the madness of King Ludwig and what illness he actually suffered from.
Personally I believe that this mystery surrounding him, his life and death, is what has endeared Ludwig to the people for more than 100 years. Every year, thousands of people pilgrimage to the site of his death and millions visit his fairytale castles. If we would know everything about the King, would it still be the same? Sometimes you just need a little mystery that leaves room for imagination. Not everything has to be explained and proven. Was he mad or not? Who cares - he didn't harm anybody and left us some amazing places people can step into and forget about the madness of this world. So let him rest in peace and not come up with a gazillion new theories and flimsy evidence for "an eternal mystery I want to remain, to myself and others." Let Ludwig have the last laugh.
Interested in King Ludwig II?
Also read: The Swan King, His Fairytale Castles and Mass Tourism
CastleTalk Wittelsbach