Meghan and the Media: Don't Sow the Wind... 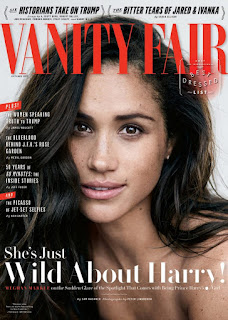 ...or you shall reap the whirlwind, dear Meghan Markle. Earlier today excerpts of an interview to Vanity Fair with the girlfriend of Prince Harry were published all over the media. My first reaction: When did it become customary for royal girlfriends to talk to the media? I understand that, being an actress and a public persona in her own right, she is in a bit of a special position but that still doesn't make it a good idea. "We're a couple. We're in love. I’m sure there will be a time when we will have to come forward and present ourselves and have stories to tell, but I hope what people will understand is that this is our time", she said. Here's a suggestion to keep your privacy: Don't publicly speak about your relationship!

Both Prince Harry and Prince Williams have understandably been at the forefront on a fight against intrusive media. But if you invite the media in just once, it will be hard to get them out again. I just can't help thinking that it is pretty hypocritical to demand your privacy on the one hand, but give a cover story interview at the same time on the other. To be fair, I haven't (yet) read the full interview and Ms Markle's comments may only be a tiny part of it, however, it doesn't take a lot to know that any ever so slight comment she makes about her relationship to probably the world's most famous bachelor will dominate the headlines.

In the interview, Ms Markle insists that "I’ve never defined myself by my relationship" yet that is exactly what she is doing with this interview. Its headline reads: "She's Just Wild About Harry". Any questions left? Working in the media business myself, I understand that a person interviewed usually approves the quotes in a story but doesn't have any input in the headline put above the article. Yet "Meghan Markle Doesn't Want to Give Comment about Harry" doesn't quite have the same ring to it. Talk about your own accomplishments, but not about your love for a prince that made you from an actress like thousands of others to the most googled person of 2016 - it is only natural that the media, and by the extension the public, will want do define you by it.

Some say that the interview is a sign that an engagement for Meghan Markle and her prince charming is just around the corner, The reason being that she would have never done this without his and Kensington Palace's approval. Well, they haven't exactly made the best of choices regarding media matters in the past, have they? Not that long ago, I wrote another CastleTalk about "Magic and the Daylight: Royalty in the 21st Century" also using Prince Harry's comments about "who in the royal family wants to be king or queen" and why such comments can be dangerous for the monarchy in the long run. Before that, when his relationship with Ms Markle just became public, he issued a statement via Kensington Palace confirming the romance and condemning the media intrusion and the "sexism and racism of social media trolls" and saying he was "deeply disappointed that he [had] not been able to protect her".

Do I understand where he was coming from? Absolutely! Was he right in what he said? Absolutely! Was a good idea to publish statement? Absolutely not! Setting precedent in such matters will ultimately make the media demand more and more. Just imagine - and it may not even seem imaginable right now to Harry and Meghan -  there one day comes a woman after Meghan: Prince Harry will need to do exactly the same and more for her as he did for his current girlfriend. And who says that a person who publicly talks about her royal relationship while it lasts will keep her mouth shut if it ends? I wish Prince Harry and Meghan Markle all the best and would be delighted for them to get married, but it's hard to imagine that this behaviour will make her endearing to the famously stiff upper lipped British royal family.

It has always been the unwritten rule for all royal girlfriends (and boyfriends) not to talk about your relationship. And that will always protect you: If your relationship does not last the distance, a "no comment" will never go out of style and you will ultimately fade into as much obscurity as you like. If you make it down the aisle, you will have proven yourself as a valuable member of a family whose every part of life is constantly under the world's magnifying glasses. Tell the world when you are ready to make it official. Until then, enjoy it while you are only an extension of the most famous family in the world and not part of it.
CastleTalk