CastleTalk #6: Remembering the Battle of the Somme, Bloody Wars and Why Europe is My Home


This week saw various memorials for the centenary of the Battle of the Somme and with all the things that happened in the past few days, it's a good time as any to pause and remember what Europe and the EU stands for first and foremost: Peace. Yes, it's easy to forget between the shape of bananas and the energy efficiency of light bulbs, but the EU remains a peace project - and possibly the greatest one there ever was.

Back when the European Union won the Nobel Peace Prize in 2012, I wrote a private Facebook post saying "Nobel Peace Prize: Number 3, 4, 5, 7, 8 and 9 on the list of the world's top arms-exporting countries say thank you. And Frontex, too."And that's still what I think. Even though refugees were taken in this and the past year, we as a collective still too often close our eyes to what happens just outside our borders. Does someone really care how many people have drowned in the Mediterranean in the past year? We chose to live in this happy little bubble, where - despite some actual problems we have - we still have the time to complain about not being able to use high-powered vacuums and that we can only buy straight cucumbers. It's a tough life in that happy little bubble the EU has created for us.

Flashback 100 years: In July 1916 the people of Europe were in the midst of what they thought would be 'the war to end all wars'. Little did they know that another war even more devastating would follow on its heels. Both wars combined claimed more than 80 million lives. The Battle of the Somme alone resulted in one million casualties. British, German, French - no matter whether they were on the right or wrong side of history - and with World War II it's certainly easier to tell which one is which - death didn't ask their nationality. And death also doesn't ask if you are a soldier or a civilian.

Growing up, I always wondered how people could vote for someone like Hitler or Mussolini. Sadly, life teaches me how. (Just to be sure: I'm not implying that the leaders of these right-wing movements are as bad as Hitler and Mussolini, but what is happening right now gives us a prime example on how politicians can feed on people's fears.) To me, what has happened in Great Britain, the Brexit, is another sign of what is happening in all over Europe and other parts of the world in the past few years: The rise of a nationalism. Something that frankly frightens me because nationalism has never brought us anywhere but war. It is what brought human kind to the Somme and it is what brought humankind to Stalingrad and the Bulge. 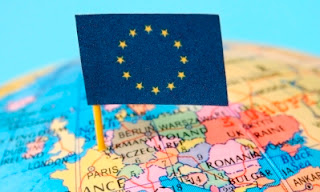 Yet we collectively as humankind never seem to learn from history. Or rather, the only thing we learn is that we don't learn. We seem to keep falling into the same traps all over again. One try to make things better was the European Union. Up until 1945, never in its history had Europe known peace. For centuries upon centuries, Europe had always been at war, somewhere, somehow. In 1952, France, West Germany, Italy, the Netherlands, Belgium and Luxembourg came together to form the European Coal and Steel Community. It was the first international organisation based on the principles of supranationalism, which would ultimately lead to the foundation of the European Union. Of course, it was about coal and steel but it was even more about keeping an eye on each other - coal and steel were two of the most important things you needed for warfare - and working together.

What grew out of it were 70 years of peace. Of course there were many contributing factors but looking at it, there is no use denying that "the European Project" played a major role. Instead of having war as a constant prospect on the horizon, Europe was united in a community of interests. Today, there are generations of Europeans who only know peace, who do not know the sounds of bombs bursting in the air or artillery fire. My grandparents grew up in times of war that went beyond what anybody could have imagined in terms of cruelty and violence, I grew up in a Europe without borders. And Europe is my home.

I was born in 1989, the year the wall fell. I didn't grow up in a world where the world as we knew it ended just 50 kilometres away like it was for the generation of my parents. I grew up in a Europe where I could go from the Finnish capital Helsinki to Lisbon in Portugal without showing an ID once. I grew up in a Europe where you would pop over to the Netherlands or Denmark for the weekend or just a day trip, a Europe where I spent my term breaks visiting friends studying all over Europe. In school or at uni it didn't matter whether you were German, Greek, Spanish or Czech. It was merely a matter of smalltalk and one of those "You know you are [[insert nationality here]] when..." subjects. We were all part of this bigger thing that we all knew but never talked about because it was natural to us. Like most Germans, I had never been the most patriotic person anyway. Given our history, it's difficult to be unashamedly proud of our nationality when there's not a major football tournament going on at the moment.

Could our grandparents, great-grandparents and generations before them have imagined us all living together peacefully for seven decades? I doubt it but still it was their dream and the EU brought us a very large step closer to it. Being the youngest one in the family, I often spent a lot of time with my grandparents when I was a child. Curious as I was, I asked them questions and more questions about their lives growing up - and World War II. My maternal grandfather was an ambulance driver for the Wehrmacht, waiting behind the lines for the battle to be over and then picking up those who still had a chance of survival. A religious man until his death, he was a supporter of the Christian Democratic Party, which today is the party of Angela Merkel, after the war. When they supported the reintroduction of any army in Germany during the 1950's, he left them and joined the Social Democrats instead - because he never wanted his children and grandchildren to witness what he had witnessed.

When he was the same age as I am today, he had just returned home from captivity in France. He had seen much of Europe between the Caucasus mountains and the Atlantic ocean - but not as I have seen much of Europe from Stockholm's archipelago to the ruins of Rome. His experiences of Europe weren't about eating English fish and chips and drinking Belgian beer with his Greek friends or roaming the streets of Italy on a lovely warm May night. Right now, Europe is about to destroy that dream his generation had, a dream of a peaceful Europe.

Please, don't let us destroy what we have over quibbles that are so much smaller than what the European Union stands for and nationalism that will never lead us anywhere but conflict. Because frankly, I want my children and grandchildren to have the same experiences I had: To travel through a Europe without borders, to make friends from all over the continent, to drink Italian wine on a sunny day in Paris complaining with their Dutch friends about the ridiculous laws the EU makes about bananas and cucumbers. And they'll laugh about it, because they know that no matter what divides us, Europe will always be their shared home.
CastleTalk