When you think of the Louvre, you probably think of paintings and art - but it is also home to another kind of incredible craftsmanship: The French Crown Jewels. The Palais du Louvre, of course, served as a royal residence between the 14th and 18th centuries. And it is here in the Galerie d’Apollon, a work of art in itself, where you can find a variety of tiaras and other bejeweled objects. The room owes its existence to King Louis XIV, who famously identified himself with the sun god Apollo. This gallery was one of his first building projects to represent that image. To create this masterpiece of architectural decoration, he summoned the greatest painters, gilders and sculptors of the day, who later also worked on the Hall of Mirrors at the Château de Versailles. But the focus of today's article shall be on all that glitters. 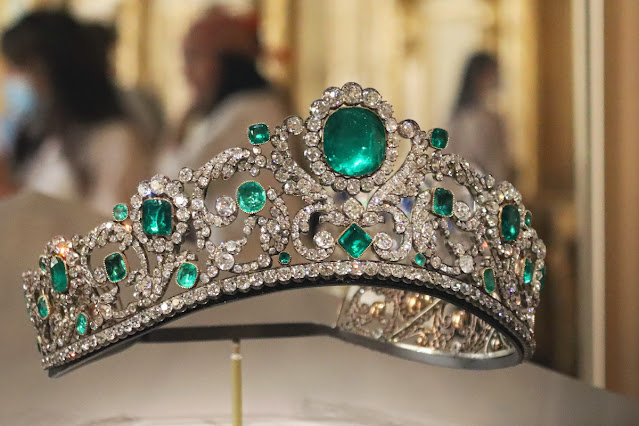 Personally, I always found royal jewellery a fascinating way to learn about history as oftentimes you can trace them through various royal families of different nations or dynasties that ruled over one country. The Emerald and Diamond Tiara of the Duchesse d'Angoulême is no different. As the name suggests, it was made for the Duchess of Angoulême, Marie-Thérèse, the only child of King Louis XVI and Queen Marie Antoinette to survive the French revolution. The tiara was a gift from her husband Louis Antoine, whom she had married in 1799. Made in 1819 to 1820, it features several stones already in the possession of the French crown as well as new acquisitions. It includes 40 emeralds, at 77 carats, all set in yellow gold, and 1,031 diamonds, at 176 carats, which are set in silver. After the abdication of her father-in-law and husband, the tiara remained with the French state as it was already part of the crown jewels where it found a new wearer in Empress Eugénie, the wife of Napoleon III. During the late 19th century, it was sold in auction but luckily returned to France and the Louvre in the early 2000's. 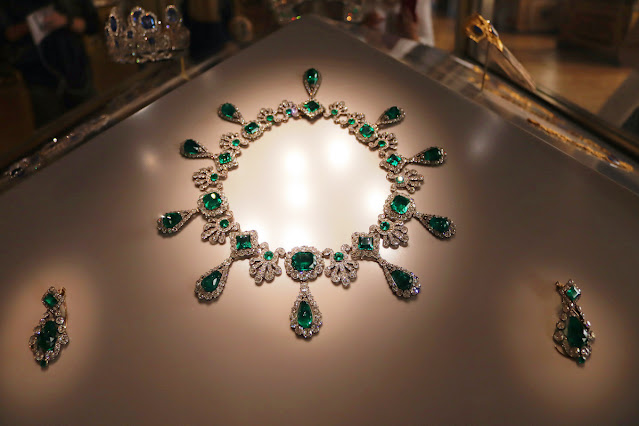 The necklace and earrings, made of emeralds and diamonds, form part of a parure once owned by Empress Marie Louise of France. They were part of the wedding gifts to the Austrian archduchess by her husband Emperor Napoleon I. Originally, the parure consisted of a tiara, a necklace, a pair of earrings, a hair comb and a belt clasp. It featured 138 emeralds, 382 rose-cut diamonds and 2,162 brilliant-cut diamonds. These days, only three of the original pieces can be found at the Louvre. Inherited by Marie Louise's Austrian relatives, the various pieces of the parure were sold at different points in time - these ones were acquired by the museum in the early 2000's after they had already been loaned to them since the 1960's. The tiara to go along with them had been purchased by Van Cleef & Arpels a few decades early and has been dismantled substituting the emeralds with turquoises. 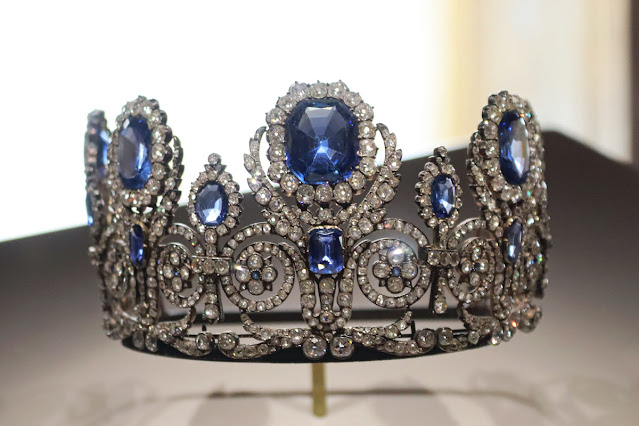 Another gemstone is at the heart of this goodie: The Sapphire and Diamond Parure of Queen Marie Amélie, sometimes also referred to as the Orléans Sapphire Parure. The Queen actually owned several sapphire parures, so the provenance information is a bit shaky at times. Sometimes this parure is attributed to Queen Marie Antoinette, sometimes (and more likely) to Empress Joséphine, first wife of Napoleon I. It entered the collection of Queen Marie Amélie in 1821, when it was gifted to her by her husband Louis Philippe, who had purchased it from Hortense de Beauharnais, Joséphine's daughter. 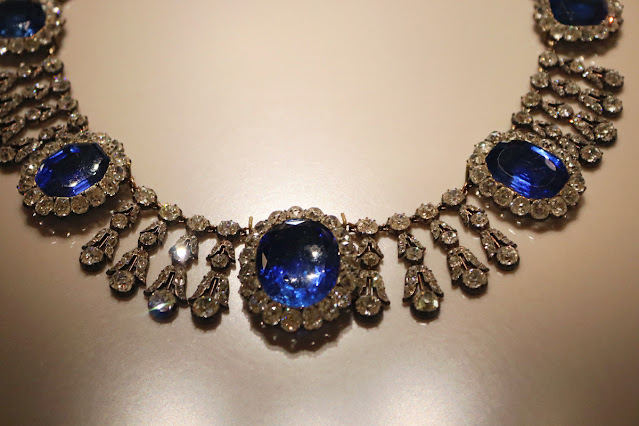 The parure consists of several pieces, the most impressive of which is probably the necklace. Like all pieces of the parure, it is made of a set of large natural Ceylon sapphires and brilliant diamonds, set in gold. Over time, several changes were made to the individual pieces and the tiara decreased in size. In difference to most other sets at the Louvre, this one actually wasn't part of the French Crown Jewels from the beginning. Instead it passed through the generations of descendants of Queen Marie Amélie for several decades and worn for important occasions until the 1980's, when it was sold to the museum by the Count of Paris. 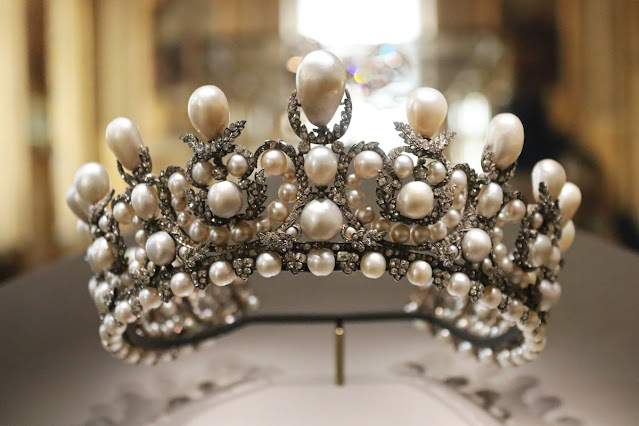 The third tiara on display at the Louvre is Empress Eugénie's Pearl and Diamond Tiara. Commissioned by Napoleon III as part of a suite of jewellery for his soon-to-be wife Eugénie de Montijo, it features 212 pearls and 1998 diamonds. The tiara was made by Gabriel Lemonnier for the wedding in 1853 and worn by the Empress for her famous Winterhalter portraits. Much like the Emerald and Diamond Tiara on this list, it was originally part of the French state treasury but sold in the late 19th century. The new owners: The Princes of Thurn und Taxis, whose home is Schloss St. Emmeram, sometimes said to larger than Buckingham Palace. The German noble family held onto it for a good 100 years before they sold it to the friends of the Louvre to be put on display at the museum.