Usually here at Confessions of a Castleholic, we are all about castle hunting. But in today's post, let's do some castle hiking! And where better to do it than in the most beautiful of Tyrols, South Tyrol? (No offense to Tyrol north of the Brenner Pass but you can hardly top scenic alpine mountains paired with palm trees.) Famous for its mild and sunny climate, South Tyrol - and especially Merano - has been a favourite destination for the bright, beautiful and wealthy for a long time. No other than Empress Elisabeth of Austria, better known as Sisi, was one of the first to holiday south of the Alps in what today is a German-speaking autonomous province in Northern Italy. 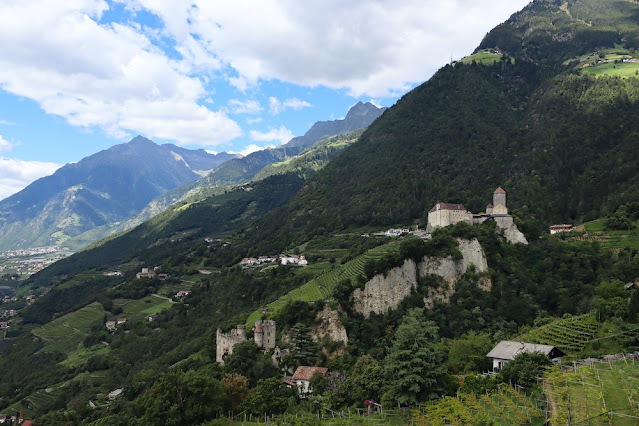 Thankfully, these days mere mortals are also able to travel to and holiday in beautiful South Tyrol. An abundance of hiking trails awaits you, but for any Castleholic combining a day in nature with discovering new historic sights seems the wait to go - and so I did. Passing the Passer via the Ponte Romano and sneaking a view into the stunning Gilfklamm, a gorge the river passes through, I walked along the Tappeinerweg, a panorama hiking trail above Merano all the way to the turn-off heading up to Dorf Tirol (literally Tyrol Village). It's a short but steep walk up from the Tappeinerweg to the village but you will soon be rewarded with your first glimpse of not one but to castles. High up on the right you can see Schloss Tirol, we will take a closer look at in a moment. But first let your eyes wander a little to the left further down the hill. The second castle you can spot there is the Brunnenburg. Built around the year 1250, the medieval castle is a museum and home to the Ezra Pound Center for Literature today as it is owned by his descendants. 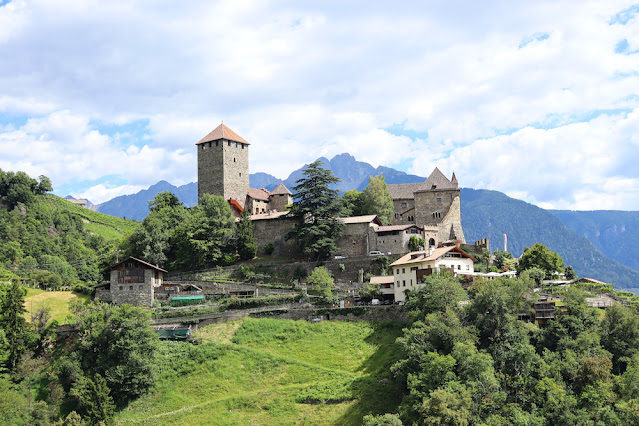 Probably the most impressive of all the castles of today's post is indeed Schloss Tirol. Lucky for any hiker, that you get to see the ancestral seat of the Counts of Tyrol from several different angles, as you pass three sides during the hike. If you like, you can actually make a stop and visit the castle to learn more about regional history. The first castle on this location with built before the year 1100. The original structure was expanded numerous times during the Middle Ages. It proved its value as a fortification during the mid-14th century when Margarete of Tyrol successfully defended Schloss Tirol against the troops of the future Holy Roman Emperor Karl IV. Later, the castle lost is strategic importance and fell into ruins. First preservational efforts were made during the late 19th century, when the Schloss was renovated in Neo-Gothic style by Friedrich von Schmidt. For over a hundred years now, it's been owned by the Italian state. 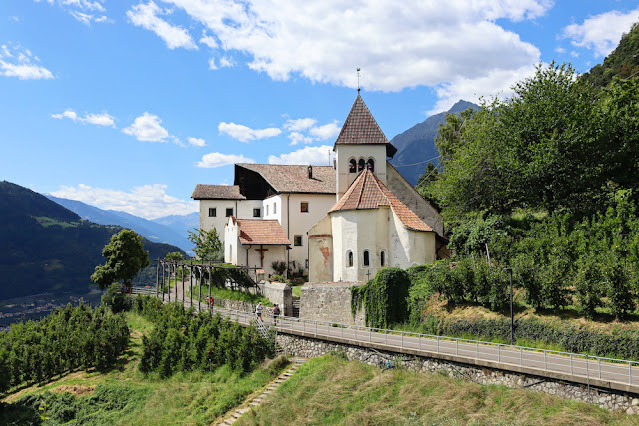 Next up on the way is not a castle but a church. St. Peter's Church is may be small but a sight worth seeing along the way. Dating back to the Carolingian period, the church offers several small frescoes and an impressive organ to be seen. It is considered to be one of oldest church of the region and from the churchyard and the street in front of it, you get perhaps the most epic views of Schloss Tirol with the Alps behind it as seen in the picture above. After Schloss Tirol and the church it was time for some lunch and when in the Alps, do as the Austrians do even though you are technically in Italy*: Eat Kaiserschmarrn. I will spare you a picture because this is not a food blog but I can tell you, it was delicious. (* Light-hearted comment because this is not the place to get into the specifics of South Tyrolean history even though I can only recommend reading up on it.) 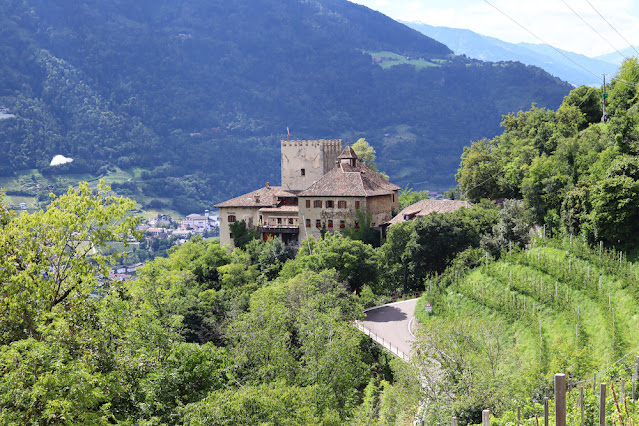 Who goes up has to go down again - and so afterwards starts the descend to Merano. Lucky for us, there is another castle to admire along the way. Schloss Thurnstein today is a hotel and restaurant but its history naturally goes back a long way. Firstly mentioned in 1276, the castle was inhabited by the chamberlain of the Counts of Tyrol at the time and known as Thurm Platzleid; it became known under its current name during the 15th century. Over the centuries, several additions were made to the structure. Since the 17th century, it has been owned by the same family who opened the current restaurant there following World War I. From Schloss Thurnstein the hike follows several serpentines downhill for what feels like an eternity - am I the only one who only ever notices how far up they have walked when they go down again? - until you can enter the the Tappeinerweg from the northern side once more to get back to the point where you started your hike. If I would be a better organised hiker, I would probably be able to tell you how far the distance is, how much elevation gain there is or how long it took me - but apparently I am very bad at this so I can only tell you: If you are ever in South Tyrol, I can only recommend checking out this hike for its natural and historical beauty.
Italy South Tyrol Tirol