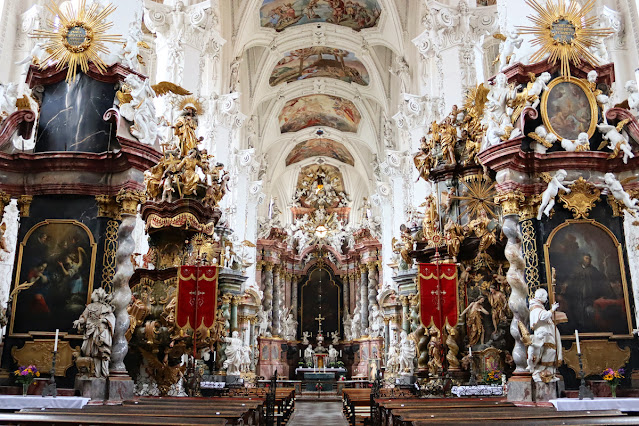 A Baroque church in Brandenburg? Yes, that exists! Admittedly, the northern half of Germany isn't naturally blessed with a lot of beautiful Baroque churches. While there are plentiful in the southern Catholic half of the country, northern Germany is the heart of famously frugal and restraint Lutheran protestantism. So Kloster Neuzelle is quite the exception, a Baroque treasure on the German-Polish border hidden among a plethora of (Neo-)Gothic churches.
Neuzelle Abbey was founded as "Nova Cella" in 1268 by Heinrich the Illustrious, Margrave of Meissen and Lusatia. The aim was to Christianise the recently conquered surrounding Sorbian lands. The first Abbey was built between 1300 and 1330 in typical local Gothic brick style. During the 15th century, it was repeatedly destroyed by the Hussites. As the monks refused to convert to the teachings of Jan Hus, they were banished or killed. Despite, Neuzelle Abbey survived the reformation as the only Catholic monastery in all of Lower Lusatia which became predominately Protestant. Following the Peace of Prague, Kloster Neuzelle fell back to the now Lutheran Saxon House of Wettin who had to guarantee the Habsburgs that the Abbey would remain Catholic. And so it did. 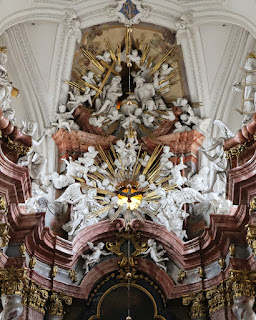 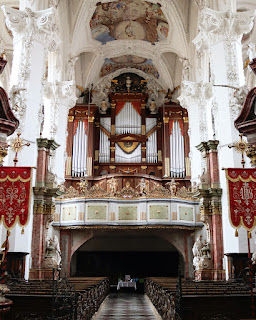 Heavily damaged during the course of the Thirty Years' War, Neuzelle Abbey was rebuilt during the early 1650's still in Gothic style. Between 1655 and 1658, the abbot at the time had Italian artists create stuccos and frescoes. The full-blown Baroque make-over of the church was commissioned by his successor. Taking inspiration from southern German Baroque churches, the current appearance of the Abbey's main church was created during the second half of the 17th century. Kloster Neuzelle's days as a Cistercian monastery, however, were counted (at least for now). As a consequence of the Congress of Vienna, Lower Lusatia fell to the Kingdom of Prussia and Friedrich Wilhelm III had it secularised in 1817.
While the surrounding buildings were used for administrative and educational purposes - and the other church of the abbey complex was reconsecrated as a Protestant church - the former Abbey's main church remained a Catholic parish church and became a pilgrimage church following World War II. Remember how I said that the Abbey's days as a monastery weren't quite over yet? While the abbey complex actually is now owned by the state of Brandenburg, Cistercian monks from Heiligenkreuz Abbey in Austria actually returned to Neuzelle in 2016. For now, they are using the old Kloster Neuzelle though there are plans to build a new one nearby. One thing seems sure: The new abbey's church won't be quite as elaborate as this one.
Brandenburg Germany