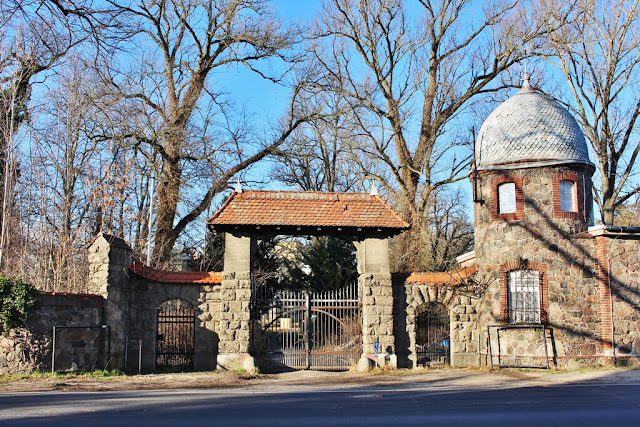 Well, let's change things up a little but here on Confessions of a Castleholic... So far I ever only wrote about castles I actually saw. After some 200 castles and palaces, it's time for something new. So here's Schloss Schenkendorf, henceforth also known as the castle I never properly laid eyes on. Visiting castles that aren't open to the public can always be a bit of hit and miss. You never quite know how much you will be able to see. There's a reason why I go on these kinds of castle hunting adventures to castles not open to the public usually during the winter months - because there is no greenery in the way. Looking back, it is actually quite surprising that I never had a total miss before. So, Schloss Schenkendorf definitely is a first in that regard - it boasts in impressive gate though, non?!

This castle just south of Berlin owes its existence to publisher and businessman Rudolf Mosse. He commissioned the construction of the Neo-Classical style Schloss in the village of Schenkendorf, hence its name, in 1896. It is situated in the heart of a large park surrounded by two metre high walls. Mosse died at his castle in 1920. Until 1932, the castle continued to be owned by Mosse's family. During the 1920's, it became a popular meeting place for intellectuals from nearby Berlin. By the early 1930's, the publishing company of the Mosse family had run into heavy financial difficulties. The formerly biggest German newspaper publishing company declared bankruptcy. It henceforth came under the forced administration of a trustee corporation. 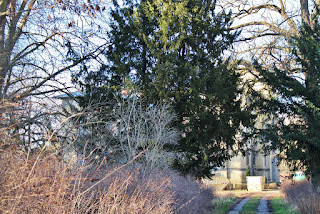 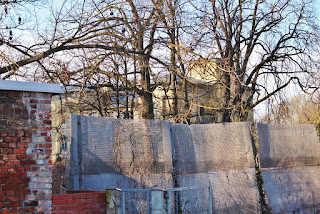 After 1945, the estate was used by the National People's Army of the German Democratic Republic. Following the German reunification in 1990, Schloss Schenkendorf was given back to their heirs of the Mosse family, who is Jewish and their properties were seized by the Nazis. In 1995, they sold the castle to a very flamboyant new owner by the name of - wait for it - Ottomar Rodolphe Vlad Dracula Prince Kretzulesco. Yep, that's quite a mouthful! Born Ottomar Berbig, he was a Berlin-based antique dealer who was adopted by Romanian aristocrat Princess Catherine Caradja. The new owner brought new life to Schloss Schenkendorf throwing Dracula-themed parties and actually organising blood drives in corporation with the Red Cross. (Kind of a genius idea, I might add.)

The new life at Schloss Schenkendorf, however, wasn't long lived. Ottomar passed away in 2007.  Two years later, the castle was sold to a company from Dresden. Over the following years, however, the Schloss started to fall into ruins and it actually became a a popular destination for hunters of lost places. When I visited earlier this year, there were - surprising and luckily for this castle - renovation works going on. I couldn't find any mentions of this in the media, but I'm glad that there may be new life coming to Schloss Schenkendorf soon.
2020 Brandenburg Dahme-Spreewald Germany Kretzulesco