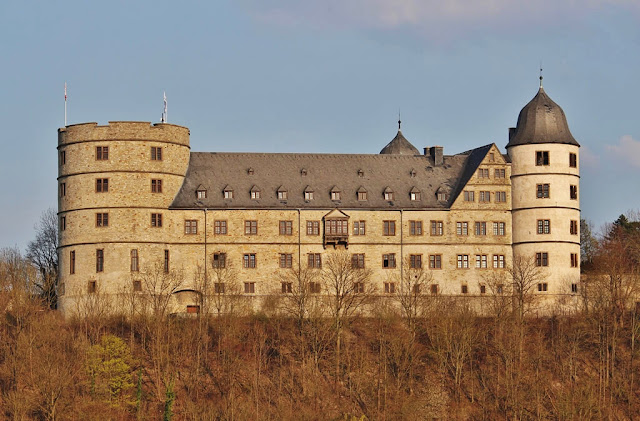 Castle visits can be fun, majestic, educational - and sometimes even very moving. It's been almost a year since I visited the Wewelsburg near Paderborn. Every time I have since wanted to write about this place, I never knew what to say for this castle is the place that caused the most ambivalent feelings within this Castleholic. Many castles and palaces in Germany and elsewhere have very varied history. Within Germany it is also a common part of the history of many castles that there is a connection to the darkest days of German history, the Third Reich. But the Wewelsburg - or rather what people made of it - took it to the next level.

And I will admit: Suddenly I stood there during my visit and had tears in my eyes... It was towards the end of my tour of the Wewelsburg, a Renaissance-style castle of the Prince-Bishops of Paderborn turned SS cult-site during the Third Reich, that my ambivalent feelings about this place came to light. I was looking at a mosaic made of glass by survivors of the nearby concentration camp showing a ship, set sail - and below a hand-written note "Freedom, full sail ahead". Inmates from the concentration camp had gifted it to a local carter who had hidden his truck in the nearby forest so the SS couldn't use it thus saving their lives just long enough until they were liberated by the Americans. It was a poignant end to almost two hours being confronted by the worst this castle's history has to offer. 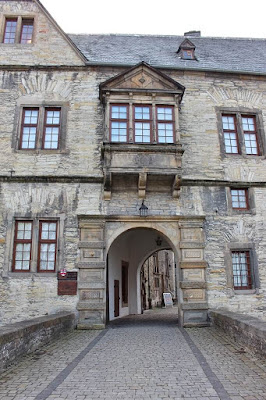 Already in 1933, Heinrich Himmler, head of the SS and one of the most powerful men in Nazi Germany, took a special interest in the Wewelsburg. Himmler was first introduced to the castle during the election campaign in the area. He believed the castle's history to go back a thousand years to the days of Heinrich I, Duke of Saxony and King of East Francia, and his fight against the Magyars. He made the decision to buy or lease the castle in November 1933. He tasked his architect Hermann Bartels to draw up plans for a SS Leadership School to ensure a unified ideological training. While negotiations with the local municipality were a bit tough at first, they agreed for a rent of one Reichsmark a year for the next 100 years. About a year later, Himmler officially took over the Wewelsburg in a large ceremony. In 1934, the eastern castle bridge was built and the castle moat lowered to give the castle a more fortified appearance. 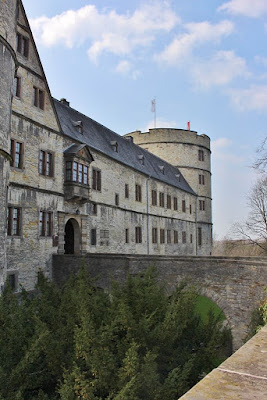 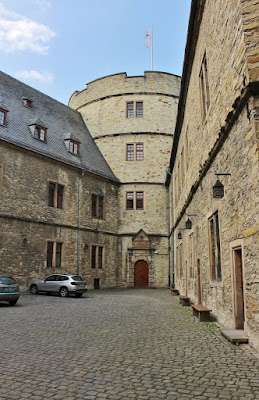 During the early years of the Third Reich, the Wewelsburg's interior was also given a major makeover now incorporating several Nazi and SS symbols. The preferred elements of design were based on runes, swastikas, and Germanically interpreted Sinnzeichen (sense characters). At some point, it was decided that the castle would not only become a SS school but also a cult site. Many of the names of the rooms were drawn from mythological and historical figures, such as Gral (grail), Heinrich der Löwe (Henry the Lion), König Arthus (King Arthur), Widukind and more. Himmler reportedly imagined the castle as a focus for the rebirth of the Knights of the Round Table and appointed twelve SS officers as his successors, who would gather at various rooms throughout the castle and perform unknown rites. The northern tower was given an extra special role as the axis of this tower was to be the actual "Centre of the World". A preparation for an eternal flame in the vault, a swastika ornament in its zenith and the so-called "Black Sun" symbol embedded in the floor of the Obergruppenführersaal, a hall for the leaders of the SS, lie on this axis. These rooms in the northern tower are actually the only ones from the Nazi era kept to this day - and I can tell you, that it is an extremely strange feeling to stand there.

To turn the Wewelsburg into an even more mystical place, Himmler banned non-SS-staff to visit the castle in 1935. Four years later, he forbad even publishing its name. During the pre-WWII years, the SS used the Wewelsburg for swearing in ceremonies. The SS Honour Rings, better known as Death's Head Rings, of dead SS officers were also kept at the castle to symbolise their eternal membership to this supposedly most elite group of men. Construction work on the castle continued until the early 1940's. Prisoners from the Sachsenhausen and Niederhagen concentration camps were used as labourers to perform the task. By 1943, all non-war-related construction works in Germany were halted. Thus the monumental plans for the Wewelsburg which would have meant an eradication of the entire village of Wewelsburg and adjacent villages with inhabitants resettled and the valley flooded were never carried out. Only detailed plans and models tell of the Nazi's megalomania. 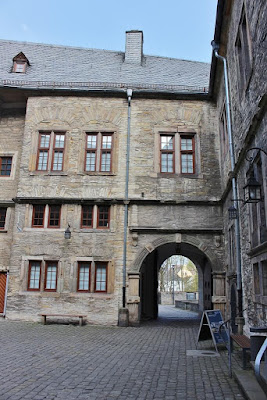 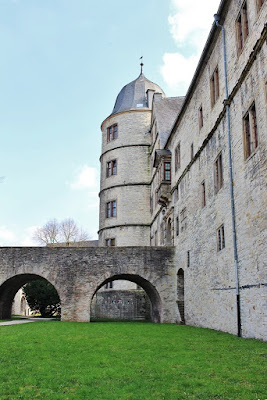 While Himmler and the SS never used the Wewelsburg as much as intended due to World War II and being occupied murdering millions of people all over Europe, a few gatherings took place there including a meeting of SS leaders in advance to the Operation Barbarossa to conquer parts of the Soviet Union. When Germany's impending defeat in the Second World War became evident, Himmler ordered for the Wewelsburg to be completed destroyed and burned to the ground. The SS, however, didn't have enough explosives thus only parts of the castle were destroyed.

The damaged parts of the Wewelsburg were rebuilt during the late 1940's. In 1950, a Youth Hostel as well as a museum about history focusing on the pre-war years was opened at the castle.  The perhaps more interesting and definitely more harrowing museum with a permanent exhibition called "Ideology and Terror of the SS" is located in the former SS guard building on the forecourt of the castle. It focuses on both the Wewelsburg's history between 1933 and 1945 and the general history of the  Nazis' Schutzstaffel (SS) - and it's a tough place to visit. Of course I knew much of the things written and shown there, but it's still a lot more confronting when you see it in a place that was supposed to have such an importance in the ideology of the SS. Because it didn't start with the gas chambers but with divisive rhetoric and politics where there was an "us" and "them", where people wanted easy answers to difficult questions - and you can't help but think that the current political climate and the rhetoric of certain political parties bear a striking resemblance.
2019 Archbishops of Paderborn Fürstenberg (Westphalian family) Germany North Rhine-Westphalia Paderborn