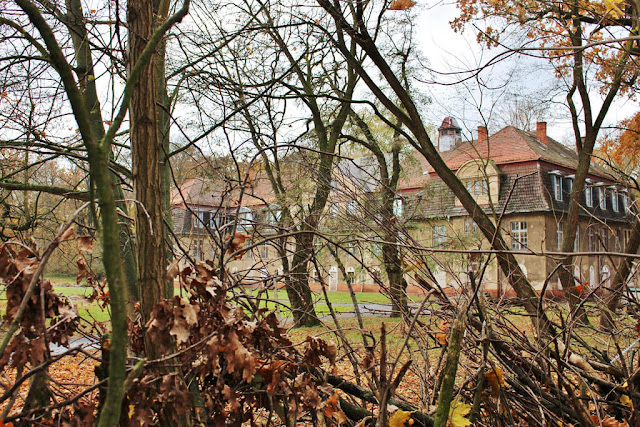 Sometimes being a Castleholic means wading through scrubs to at least catch a glimpse of a castle.  Behind the bushes and trees you can see the outlines of Schloss Frauenberg in Lübben. I only learned later that you can apparently call the owner and arrange to get on the estate that's history goes back all the way to the Middle Ages. The land Schloss Frauenberg is situated on used to be the place of the only monastery of the Order of Hermits of Saint William located east of the Elbe river. Following the Reformation, the last monks were forced to flee from Frauenberg and the monastery was secularised. It subsequently became one of the seats of the bailiff of Lower Lusatia and about a dozens or so noble families lived at Frauenberg during the following almost 400 years. 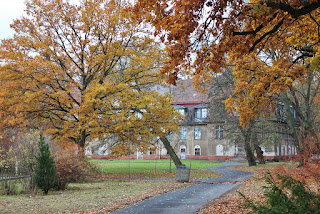 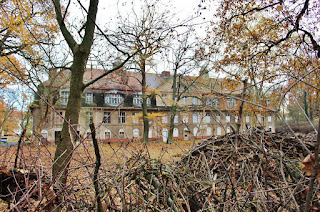 The current Schloss Frauenberg was built during the early 20th century in the Wilhelmian style popular during the reigns of Kaiser Wilhelm I, Kaiser Friedrich III, who only reigned for 99 days, and Kaiser Wilhelm II. At the time the estate was owned by the Province of Brandenburg within the Kingdom of Prussia. Construction began in 1905 and was finished by 1913. Previously the centre of an agricultural estate, Schloss Frauenberg became a hospital in 1925. During the Second World War, it was used by the Wehrmacht and, among others, became a prison for high-ranking French officers. After the war, the hospital was reopened and remained at the Schloss until the late 1990's. It was later sold to a private owner who planned to open a beauty clinic there. However, by the looks of it, first a lot of cosmetic surgery on the buildings needs to be done.
2019 Brandenburg Dahme-Spreewald Germany