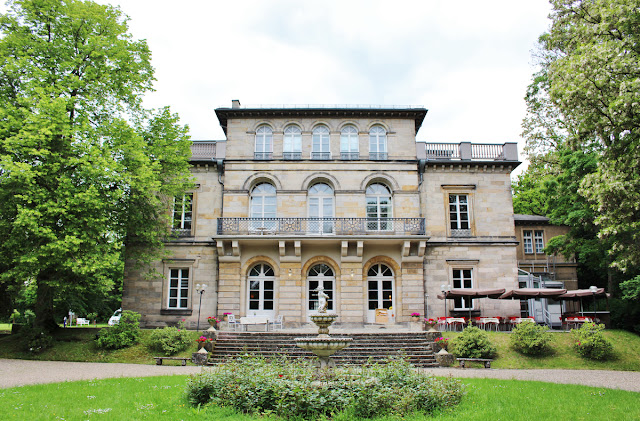 Never heard of Schloss Hohenfels in Coburg? You are excused, neither had I before doing some research for my latest castle adventure to the residential town of Saxe-Coburg and Gotha. And you would still be excused if you hadn't heard of it even if you have visited as well for the Schloss is  located rather on the outskirts of the city and also today a school. Its origins are very royal though. In 1837, Duke Ernst Alexander of Württemberg, younger brother of Duchess Marie of Saxe-Coburg and Gotha, wife of Ernst II, commissioned architect Balthasar Harres, a student of Karl Friedrich Schinkel, to draw up plans for a residential palace for himself. After Harres left Coburg a year later, it was Vincenz Fischer-Birnbaum who finished the construction on the Classicist Schloss. 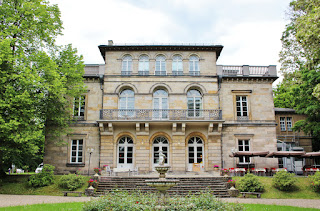 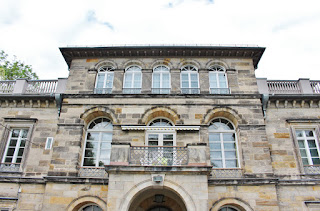 Duke Ernst Alexander later fell in love and married opera singer Natalie Eschborn a.k.a. Frassini a.k.a. Baroness of Grünhof. His brother-in-law Duke Ernst II had persuaded her to come and sing in Coburg and Ernst Alexander apparently liked more than just her voice. The couple made Coburg their primary home and their only daughter was also born here. At the time the castle and surrounding park were known as Ernsthöhe. After Ernst Alexander's death in 1868, Natalie continued to live at the Schloss for another 22 years when she moved to Berlin. In 1893, their daughter Alexandra sold the castle to industrialist Julius Heinzel who would later be ennobled as Baron Heinzel of Hohenfels - thus also giving Schloss Hohenfels its current name. He sold the castle in 1918 to another private owner until it came into the hands of the municipality in 1932. While it was used by the Nazis for the following one and a half decades, a school for physical and occupational therapy was opened there in the 1950's and continues to use Schloss Hohenfels to this day.
2019 Bavaria Coburg Germany Heinzel von Hohenfels Württemberg (family)