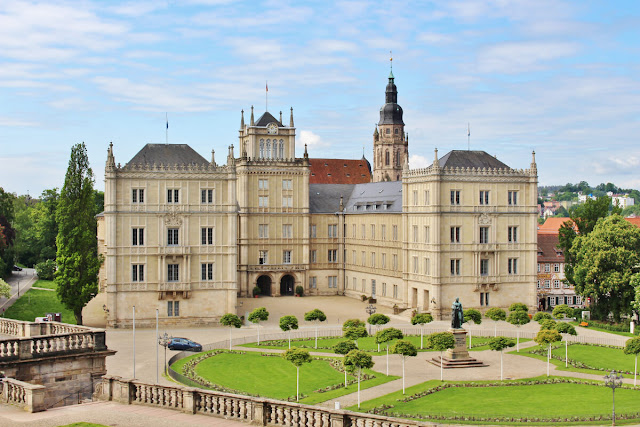 There is a first time for everything: And of course Schloss Ehrenburg obviously wasn't my first time visiting a castle but it was first time I scored private castle tour. Where exactly? In Coburg at 9am on a weekday - turns out getting up early does pay off sometimes (and this Castleholic certainly is no natural morning person)! And the best thing? I think Schloss Ehrenburg would have even been the Coburg castle I had picked for a private castle tour if I would have had the choice, I just love it and its lovely mixture of Baroque and Empire/Classicist styles, two of my favourites. Sadly, you aren't allowed to take pictures of the interior - I'll never figure out in which Bavaria-based palaces you are (not) allowed to - and so a gazillion pictures of the exterior of the former residence of the Dukes of Saxe-Coburg and Gotha will need to do. 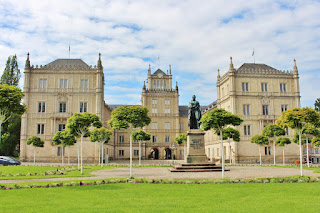 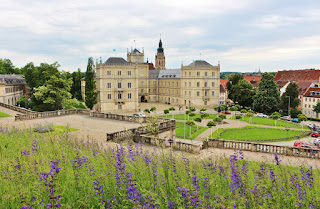 Schloss Ehrenburg was built starting in 1543 on the basis of a former Franciscan monastery under Duke Johann-Ernst of Saxe-Coburg. Interestingly, only paid workers were used to build the castle and not people forced to do socage. This is allegedly also the reason for the name of Schloss Ehrenburg. Myth has it that Holy Roman Emperor Karl V visited the construction site and was so impressed he called the place 'castle of honour' or Ehrenburg in German. A fire in 1690 destroyed the northern part of the Renaissance-style castle. Duke Albrecht III used the chance to remodel the castle according to the tastes of the time. In 1699, construction on a Baroque-style residence surrounding a cour d'honneur facing north began. (The facades of the southern parts of the castle continue to reflect the earlier Renaissance-style.) 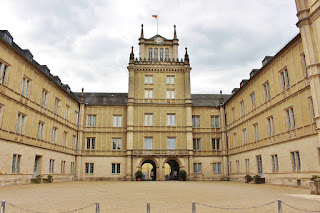 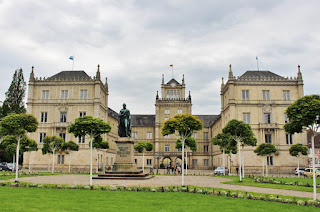 Though still apparent in several rooms of Schloss Ehrenburg, the Baroque-style facade was later, in 1810, remodelled in favour of a Neo-Gothic appearance by Duke Ernst I, whose statue can be found in front of the Schloss, according to plans by Karl Friedrich Schinkel. Duke Ernst I, father-in-law of Queen Victoria, also commissioned André-Marie Renié-Grety to redesign several rooms of his residence in French Empire style between 1816 and 1840. It was at Schloss Ehrenburg that in 1863 two of the most powerful people of the time first encountered each other in person: Queen Victoria and Emperor Franz Josef first met that year in the Hall of Giants. The Dukes of Saxe-Coburg and Gotha continued to use Schloss Ehrenburg as their main residence until the end of the monarchy in 1918. 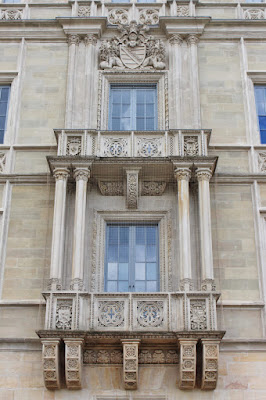 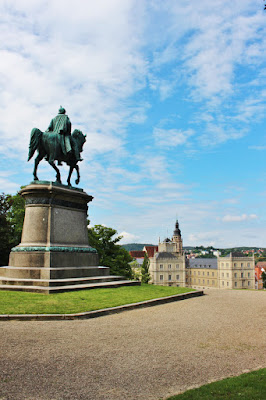 After the end of the monarchy, the Schloss came into the hands of the state. In addition to its use as a museum, Schloss Ehrenburg is also home to the Coburg state library - and it's really too bad I cannot show you pictures of the interior... My favourite? Perhaps the Hall of Giants which got its name from the 28 massive atlases supporting the beams of the ceiling. Or the Empire-style throne room featuring original French furnishings. Or the Baroque Court Chapel? (Or the first water closet or elevator installed for Queen Victoria?) Simply too many stunning/interesting rooms to chose from! I would also like to give a shout-out to the tour in general and not just because I was all on my own with the guide and thus got a few additional glimpses behind the scenes... "Do not touch" signs are one of the most common sights whenever you visit practically any historical building - but at Schloss Ehrenburg you were allowed to touch. Not the furnishings per se but the guide brought along bits of stucco (it's way heavier than you think!), fabric swatches and more to get a real feel of the castle. It may be small things but these small things make a castle tour extra-enjoyable (and believe me, I've been on many!)
2019 Bavaria Coburg Germany Saxe-Coburg-Gotha Wettin