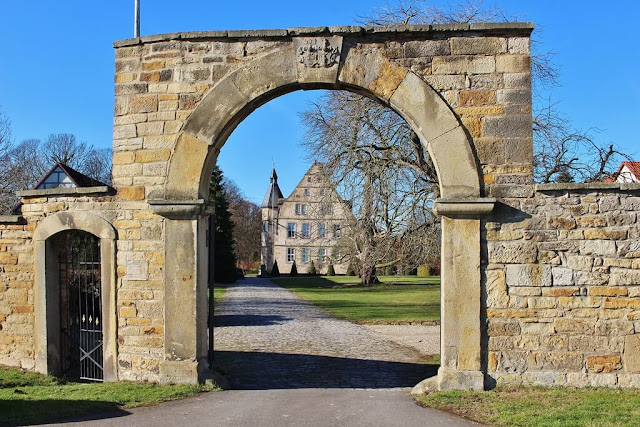 Yesterday was a ten castles kind of day in the life of this Castleholic. So where to start sharing them with you? I suppose the first one I saw on my latest castle adventure is a good beginning: Schloss von Hammerstein in the small village of Apelern near Hanover that interestingly boasts not just one but two castles. (We will get to the other one, Schloss von Münchhausen, in another post.) Now owned by the Barons on Hammerstein in the 12th generation, the history of their castle is actually also tied to the Münchhausen family. Already firstly mentioned in the 11th century, the estate came into the hands of Baron Jobst of Münchhausen in 1550 as a fiefdom by the Counts of Holstein-Schaumburg. After Jobst's line of the Münchhausen family died out in the 16th century, Anton of Wietersheim became the new owner of the estate. It was the Chancellor of the Counts of Holstein-Schaumburg who built today's Weser-Renaissance style castle between 1586 and 1590. 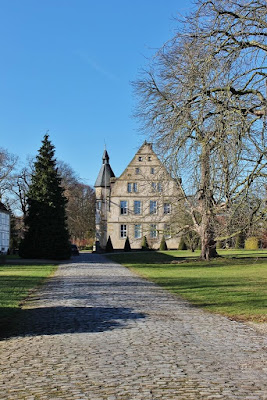 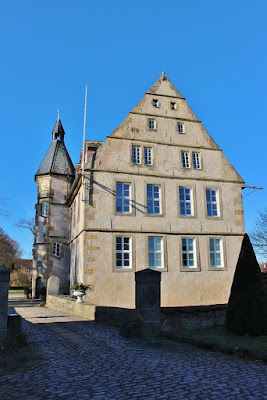 About 80 years later, the Hammerstein family came into the possession of the castle as Baron Friedrich Christoph of Hammerstein-Gesmold purchased the Schloss and the surrounding estate on June 30, 1673. Coming from a very old yet relatively poor noble family, he made his fortune during the Thirty Years' War as a leader of the Swedish troops and later served the Dukes of Brunswick-Lüneburg. To this day, the Barons of Hammerstein - and in the next generation their descendants - call the Schloss their home with several renovations and restorations taking place over the past decade or two with a special focus being put on the gardens who now once again show the early 19th century glory of the days of Börries Friederich Karl von Hammerstein, who served the Electors of Hanover and thus Kings of Great Britain as a groom of the bedchamber. To learn more, there is a great article about Schloss von Hammerstein and the challenges of running a small castle in the 21st century available in the Frankfurter Allgemeine Zeitung.
2019 Germany Hammerstein Lower Saxony Münchhausen Schaumburg Wietersheim