Back in Aldovia: Ramping Up the Ridiculousness 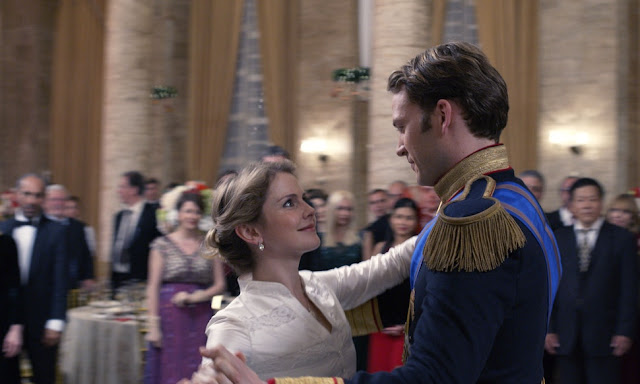 It was that pizza, wine and ice cream kind of Friday for me this week - and what goes better with pizza, wine and ice cream than a fictional royal romance? Nothing, and so it was my luck that the sequel of "A Christmas Prince" came out on Netflix this Friday. Fittingly called "A Christmas Prince 2: The Royal Wedding", it tells the story of the wedding of King Richard of Aldovia and American journalist Amber. And boy, does it ramp up the ridiculousness level in comparison to the already ridiculous first movie!

Because a royal Christmas movie without snow wouldn't be a proper royal Christmas movie, we skip ahead a year. While Richard is busy being King and bringing Aldovia into the 21st century with an failing initiative appropriately called "New Aldovia", Amber seems to have made a career out of being the fiancée of that tiny nation's head of state including magazine covers, talkshow appearances and blogging her whole way through it all while still living in the U.S. yet doesn't seem to have mastered the simple rules of SEO when she titles her opening sequence blog post "Big event". Anyhow, it's quite surprising no one in the great Kingdom of Aldovia has yet told her that posting every personal move of a royal family may not be the best idea in the whole wide world. That's going to change during the course of the movie and Amber is royally miffed.

But she also has more important things to do: As King Richard's "New Aldovia" initiative doesn't make Aldovians very happy but instead lose their jobs, Amber - whose only journalistic success had been that she managed to sneak in, pose as his sister's nanny and spy on the then Crown Prince of Aldovia - gets out all of her journalistic skills and manages to track down one guy who is unhappy with the King's initiative and write down the all-inspiring observation "fishy" on her notepad about some company. And to make her point, she even put a full stop behind it.

Something that hasn't come up yet though is why Amber and Richard have actually fallen in love. For the first half of the movie, they hardly see each other. While the first movie had snowy rides, orphanages with cute kids and all the other ingredients of what makes a royal movie a royal movie, now we are stuck with finances, government crisis and all the stuff that probably goes on behind royal doors but don't make for interesting viewing. The dramatic high point comes when Amber goes AWOL after breaking royal protocol yet again and shuts down her blog. Nobody knows where she is and where she could be until King Richard suddenly remembers that there is only one place where she can be and she is. The drama. While it doesn't make much sense otherwise, at least it brings us the much awaited horse ride through the snow.

There are several other storylines about the cousin who tried to take the crown now suddenly being the good guy, Princess Emily being simultaneously a lovestruck teenager and the world's greatest child prodigy hacker, something about Santa getting his magic in Aldovia and probably a bunch more I have already forgotten - we also learn that the castle of Aldovia has dungeon that people still get thrown into even though it's 2018 and not 1718. (I am also tempted to think that Aldovia may just be bordering on some German-speaking country because a surprising amount of German words pop up throughout the movie but that's all of the geographical details of that tiny- or large, who knows - nation I can give you.)

Oh, and there is also the Royal Wedding after the whole "New Aldovia" drama is resolved thanks to - and I quote - the "Queen-in-Waiting". While it brings us the potentially ugliest royal wedding dress that isn't the actual dress Amber ends up wearing and the most annoying royal wedding planner ever, it all feels a bit anticlimactic. While Amber tells us that "I am still me" - or something along those lines - in the first scene of the movie, maybe the wedding is a bit too much her. It neither brings us a veil nor a tiara - where is the fairytale? While she is later crowned a Queen and her father, for no apparent reason, being made "Earl of Aldovia" with a snazzy sash, I can't help but think that sequels to royal movies are never a good idea.
CastleDrama