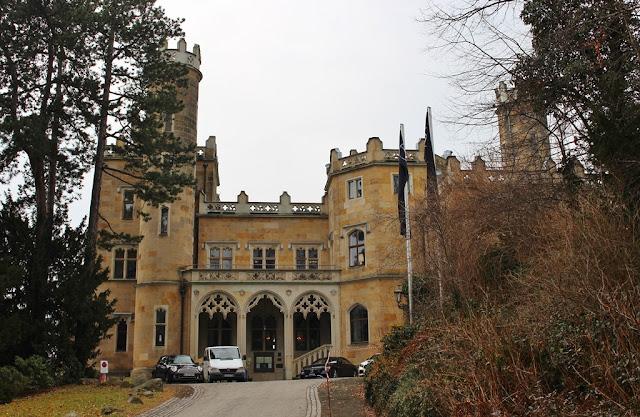 Rounding off our trio of Elbe palaces is Schloss Eckberg, located right next to Schloss Albrechtsberg and Lingnerschloss. The Elbschlösser, perched on the Loschwitz hillside high above the river, are all located on an area previously known as "Findlater's Vineyard", a number of vineyards previously owned by James Ogilvy, 7th Earl of Findlater. In difference to Schloss Albrechtsberg and Lingnerschloss though, Schloss Eckberg was never owned by Prince Albrecht of Prussia. Already in 1832, the area the Schloss is situated on was separated from the rest of the estate and sold.

In 1858, the Eckberg vineyard and two other smaller ones were bought by merchant Johann Daniel Souchay, who was originally from Manchester. He commissioned Christian Friedrich Arnold, a student of Gottfried Semper, to build an English mansion in Neo-Gothic style instead of a cottage previously located on the estate. Construction on the castle, which is considered a prime example of Late Dresden Romanticism, started in 1859 and was finished two years later. To lay out the garden and the extensive park landscape, Souchay entrusted the garden architect Hermann Sigismund Neumann, a student of the Berlin garden director Eduard Neide. Souchay died in 1871. 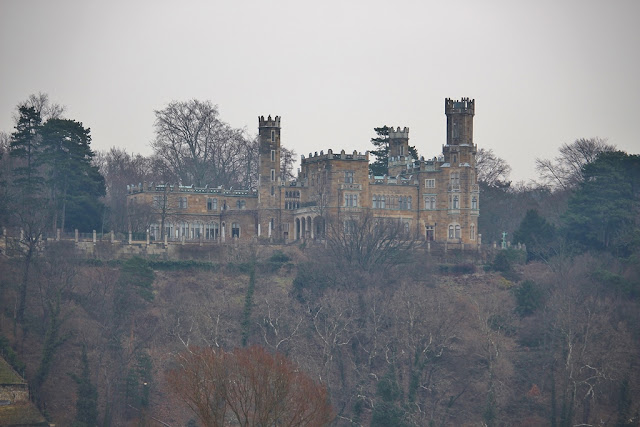 In 1883, his heirs sold the property to the entrepreneur Artur Bruno Wunderlich, the Imperial Persian, Royal Swedish and Norwegian General Consul for Saxony. (Quite a title, non?!) After Wunderlich’s death in 1909 his widow Anna rented out the castle. Some of the prominent tenants were the Austrian confectionery manufacturer Joseph Weiser and his newly wedded wife, the young actress Grethe Weiser who would become one of the most famous German actresses of her generation.

In 1925, Wunderlich's heirs sold the castle to Ottomar Heinsius von Mayenburg, the inventor of the aluminum tube and the toothpaste "Chlorodont". (No, I did not realise either how much the Elbschlösser have to do with dental hygiene before writing this post and the one on Lingnerschloss.) Mayenburg concentrated his efforts on the gardens of Schloss Eckberg creating an elaborate park with rock garden, rose wall and flower meadow. He also commissioned his brother, architect Georg Heinsius von Mayenburg, to give the rooms on the castle's upper floor a more contemporary appearance.

After World War II, the Mayenburg family left the Schloss in 1947 and was expropriated in 1952. Afterwards, the castle was used as a student residence, union school and, starting in 1969, as a branch of the research centre of the VEB Robotron Dresden for the development of memory chips. After a few years of neglect, the castle was turned into a youth hostel in the late 1980's by the East-German government. After reunification, the Schloss was bought by a consortium and turned into a luxury hotel, which it remains to this day.

Good to know:
Schloss Eckberg is a luxury hotel and not open to the general public.
2018 Dresden Germany Mayenburg Ogilvy Saxony