Beyond Castles: 9 Magnificent Temples to Visit in Angkor 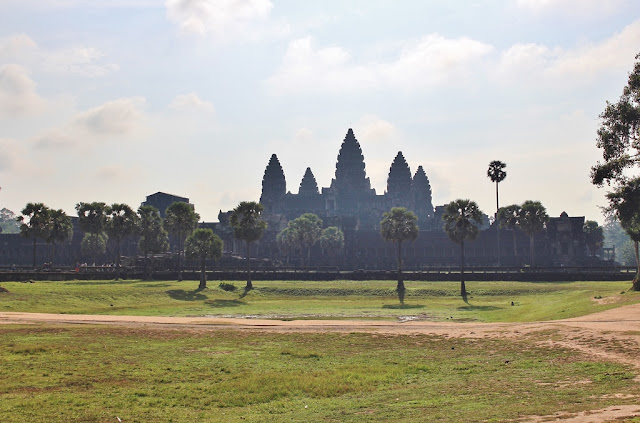 If you were to compile a list of the modern wonders of the world, it would probably be hard to miss Angkor Wat, the largest temple of the former capital city of the Khmer Empire. When people (including yours truly before her trip) say that they are "visiting Angkor Wat", they really mean that they will be visiting Angkor Archaeological Park. While Angkor Wat is the most famous of all of Angkor's temples, there are hundreds and thousands more scattered in its vicinity, from small ruins to some of the largest temple structures in the world - and even if it means going beyond castles, they are just too impressive to not share them here on Castleholic. 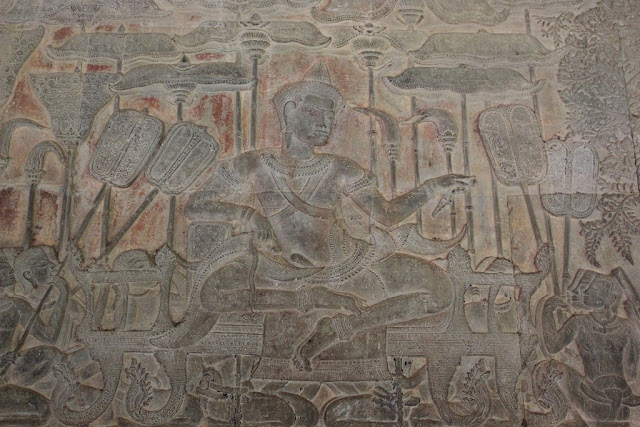 Angkor Wat
Angkor Wat literally means "Capital Temple", and - measuring 162.6 hectares - Cambodia's national symbol, you may also recognise from the country's flag, is the biggest religious structure in the world. While its sunrise isn't as romantic and breathtaking as usually described (not least due to the hundreds and thousands fellow visitors around you fighting for a spot), both its immense size and tiny details will leave you in awe. Always make sure to walk up to the top even if you have to queue up. Only the view from the top of the temple will be able due give you an idea just how massive the complex is. 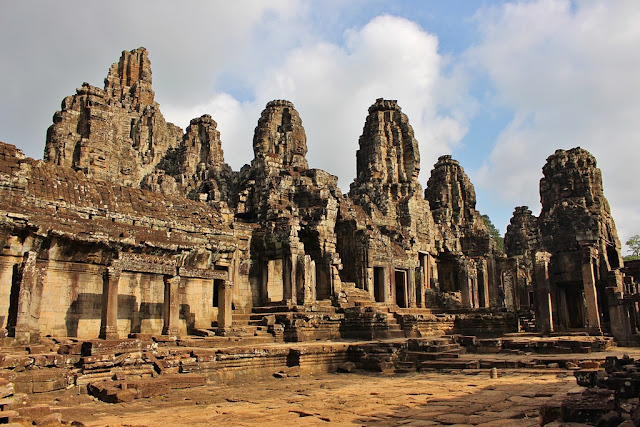 Bayon Temple
Bayon Temple is most famous for its gigantic smiling faces featured on (mostly) all the four sides of each of the four sides of the temple's towers. The meaning of these 216 faces remains a bit of a debate. Some say they embody the image of the great Angkor King, King Jayavarman VII, who built Bayon Temple. Others believe that these faces belong to the bodhisattva (Buddhist enlightened being) of compassion known as Avalokiteśvara. Whoever they depict - they are sure to put a smile on your face too. 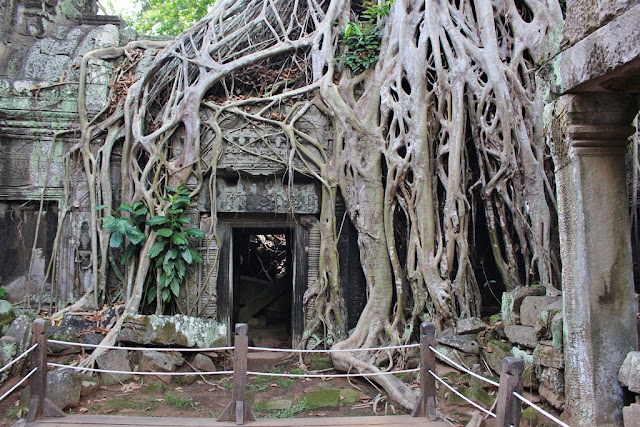 Ta Prohm
Cinematophiles will know Ta Prohm from the Tomb Raider movies - it's the temple where nature reclaims what was her's to begin with. Unlike most Angkorian temples, Ta Prohm is in much the same condition in which it was first found by Western colonialists with numerous trees growing out of and over the ruins. It's incredibly surreal and a humbling sight to see: Everything manmade is temporary. 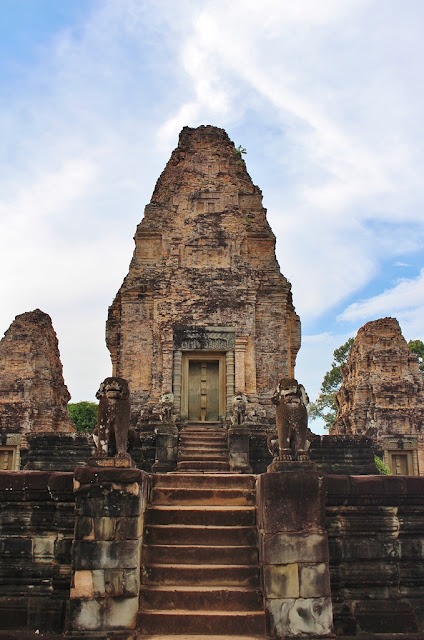 East Mebon
Once upon a time, when it was built in 952, East Mebon could only be reached via boat as it was located on an artificial island in the middle of the now-dry Eastern Baray. It looks slightly different than most of the temples and resembles Pre Rup further down on the list. The wide variety of sculptures of elephants and other animals you can find there are definitely the main attraction at the temple. 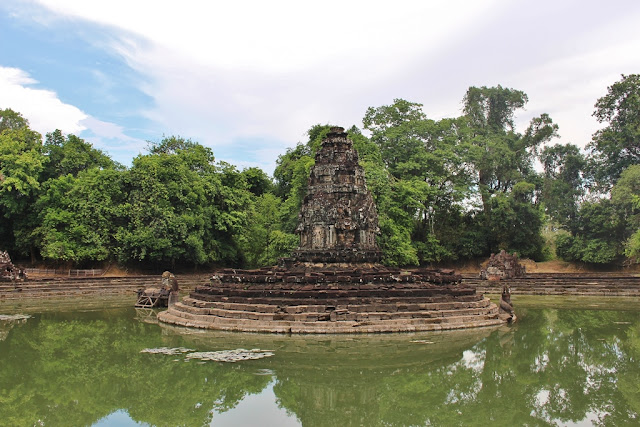 Neak Pean
Neak Pean was a bit of an extra temple: It wasn't part of the tour but as we had a bit of additional time, our tuktuk driver let us off here to have a look. It's a rather small structure in an artificial lake. Most impressive? The artificial lake is situated on an artificial island in the middle of another lake. The Khmer certainly knew how to create impressive landscapes! 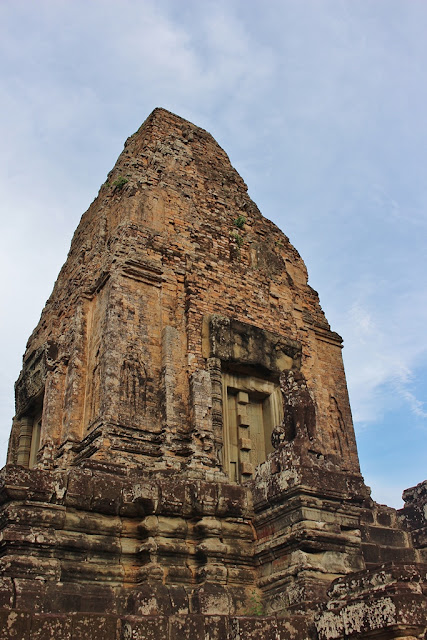 Pre Rup
Pre Rup is the famous sunset spot of Angkor. While we did walk up, we actually didn't stay for the sunset. Similar to the sunrise at Angkor Wat, there were simply too many people. Instead, we had our tuktuk driver take us to a nearby lake. There we were all on our own and it was a much better reflective end to the day than standing elbow to elbow on the top of a temple. Style-wise it's very similar to East Mebon just a bit less detailed. 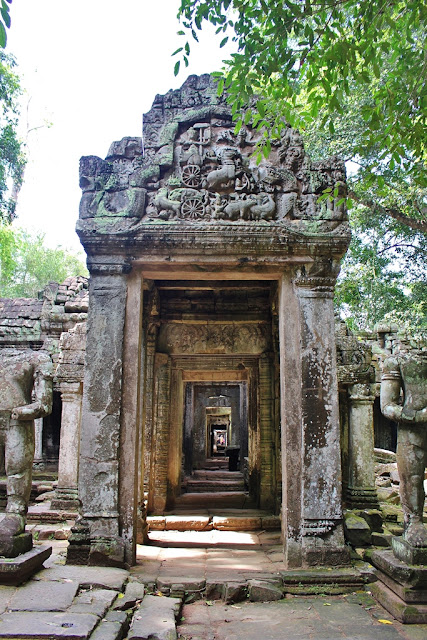 Preah Khan
Preah Khan was the very first temple is visited in all of Angkor - and I was awe-struck. It's massive and feels like you can walk on forever before reaching the other side. All the little details and carvings are really hard to all take in because there are simply so many and you don't know where to look first and last. Apart from Angkor Wat, it's probably the temple I enjoyed the most. 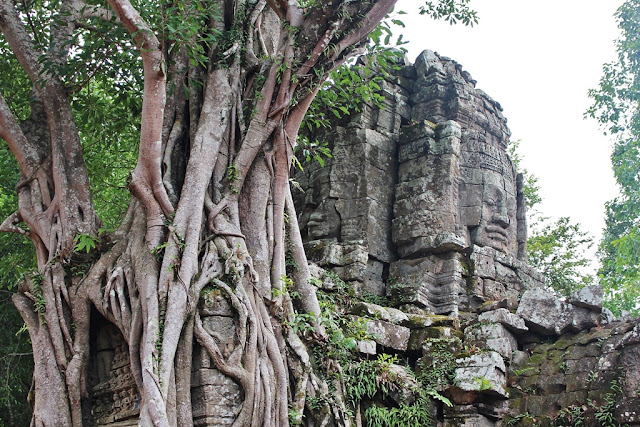 Ta Som
Ta Som is another one of the overgrown temples also featuring the famous smiling faces. What I found most impressive about all of the smiling faces apart from the calm they seem to spread over everyone? They all look the same! I didn't manage to spot any differences - amazing that these were carved by hand in the 12th century. The craftsmanship that went into the smiling faces as well as all the other carvings are simply stunning. 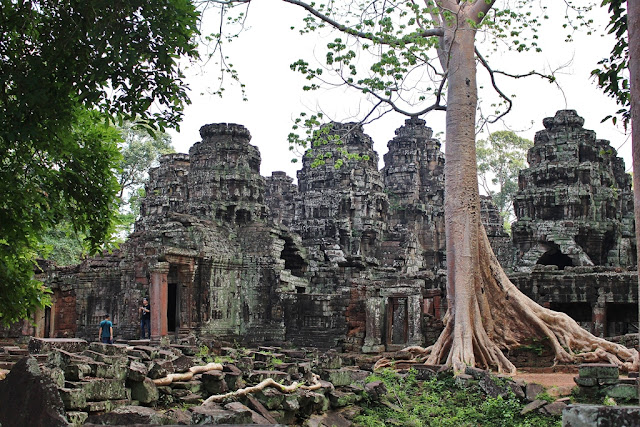 Banteay Kdei
Frankly, Banteay Kdei is the temple I can tell you least about from my own memories. It was the last of all the temples I visited on my two-day-tour of Angkor after getting about at 3am on the second day and it almost being midday -  it was built in the same Bayon architectural style as Ta Prohm and Preah Khan though at the time I visited, it felt just as a bunch of stones. 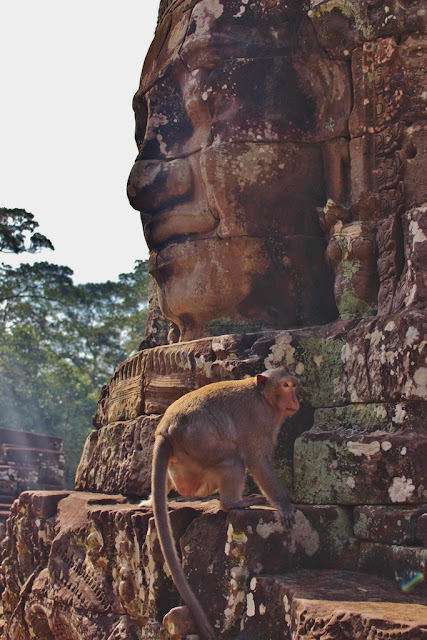 Was that an anticlimactic end to this post? Sorry not sorry, here's a cute monkey for you. While I thoroughly enjoyed visiting all the temples of Angkor and would love to get back one day to discover more, wandering around in about 34 degree Celsius and humidity of approximately 90 percent, temple-seeing can get slightly tiring and at some point some of them start to simply blend together. While you can either purchase a one- or three-day-pass, I cannot recommend you to go on three consecutive days. I went for two and was quite happy for a break after that. If you wish to see more than these nine temples, I would suggest you go for the 7-day-ticket and take a break in-between. If you only got one day at Angkor: Chose the Small Circuit featuring Angkor Wat, Bayon, Ta Prohm and Banteay Kdei and possibly another temple.
Beyond Castles Cambodia