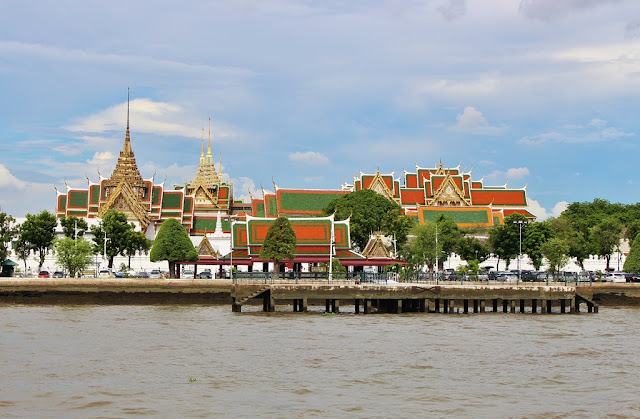 If there is one must-see sight that no visit to Bangkok would be complete without, it's the dazzling and spectacular Grand Palace. Usually considered the city's most famous sight, it is one of those places where you do not know where to look first because there is so much to discover. With my known penchant for castles and palaces, it thus won't come as a surprise to you that I did make sure to visit the official residence of the King of Thailand when I travelled to Bangkok recently. 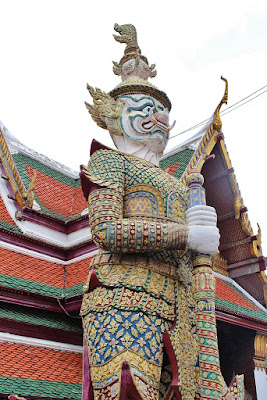 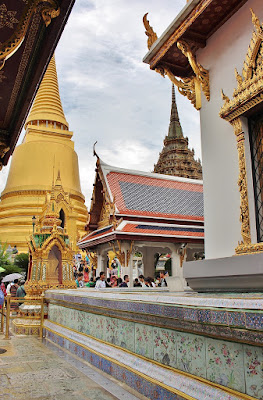 Instead of one big single structure, the Grand Palace, or Phra Borom Maha Ratcha Wang, actually is a building complex situated around open lawns, gardens and courtyards. It also includes the Temple of the Emerald Buddha, regarded as the most sacred Buddhist temple in all of Thailand. The history of the Grand Palace starts in 1782 when construction began on May 6 on the order of King Phutthayotfa Chulalok, also known as Rama I, the founder of the Chakri Dynasty that rules Thailand to this day. Earlier that same year he had ascended to the throne by deposing King Taksin of the Thonburi Dynasty. Rama I soon decided to move the capital of Siam, as Thailand was known at the time, from the west to the east bank of the Chao Phraya river for several reasons, including its better strategic location and a desire to promote his legitimacy by starting from a clean slate. 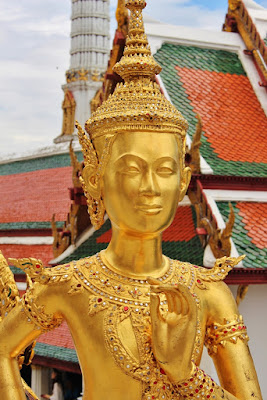 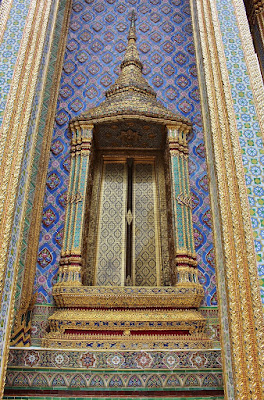 Originally both short on funds and materials, the palace was initially built entirely out of wood, its various structures surrounded by a simple log palisade at the time. The new King already took up residency a month into the building process as he ceremonially crossed the river from Thonburi to take permanent residence in the new palace on June 10. He also had a bit of an improvised coronation ceremony at the palace soon after. Over the coming years, the wooden structures were gradually replaced by stone buildings creating forts, gates, throne halls and royal residences. 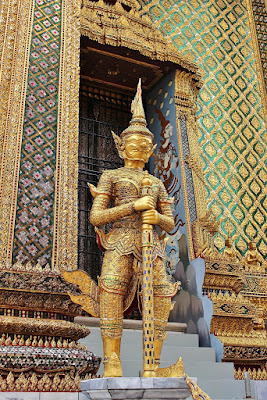 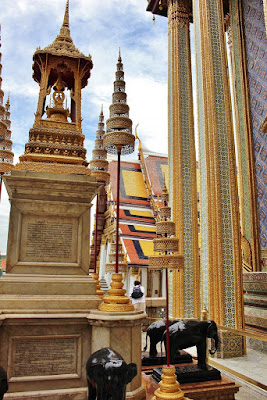 To find the necessary material for these constructions, King Rama I ordered his men to go upstream to the old capital city of Ayutthaya, which was destroyed in 1767 during a war between Burma and Siam. They were tasked with the dismantling and removal of as many bricks as they could find, while not removing any from the temples. The new Grand Palace in Bangkok also drew inspiration from the old palace in Ayutthaya with a similar layout, its location, organisation and the creation of separate courts, walls, gates and forts. These different zones within the palace complex include the Outer Court, the Central Court, the Inner Court and the Temple of the Emerald Buddha. Each of these court's functions and access were clearly defined by laws and traditions. 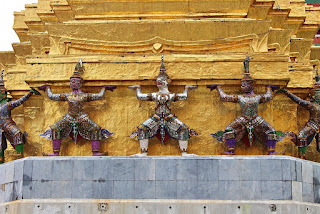 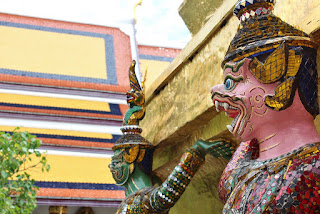 The Outer Court is situated on the northwestern part of the Grand Palace and includes the royal offices and (formerly) state ministries. To the northeast is the Temple of the Emerald Buddha. The Central Court houses the most important state apartments and ceremonial throne halls of the king. The Inner Court, situated at the most southern end of the complex, was reserved only for females, as it housed the king's harem. While a visit to the Grand Palace will lead you through the Outer and Central Courts, the Inner Court is not open to the public. 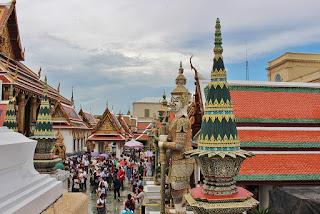 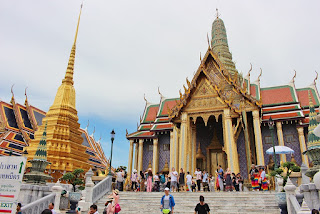 Much of the palace consists of traditional Thai architecture, while other areas are inspired by the European Renaissance era - and oftentimes a combination of both. Throughout the period of absolute monarchy in Siam and later Thailand, from 1782 to 1932, the Grand Palace was both the country's administrative and religious centre. As the main residence of the monarch, the palace was also the seat of government, with thousands of inhabitants including guardsmen, servants, concubines, princesses, ministers and courtiers, and considered a city within the city of Bangkok. 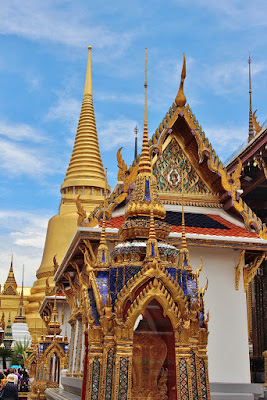 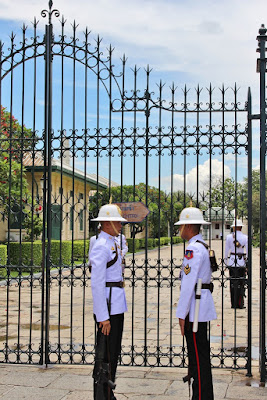 Already during the reign of King Phutthaloetla Naphalai (Rama II), the total area of the Grand Palace was expanded southwards up to the walls of Wat Pho, another important Buddhist temple in Bangkok. This expansion increased the area of the palace to 218,400 square metres, the size it still covers today. Still, several changes were made to the layout and buildings during the following centuries. For example, between 1876 and 1882, King Rama V built the Chakri Mahaprasat Throne Hall combining European structure and traditional Thai roof tiles and spires. The interior is said to include sophisticated decorations inspired by European renaissance era, adorned with royal portraits of the Chakri Dynasty’s monarchs. 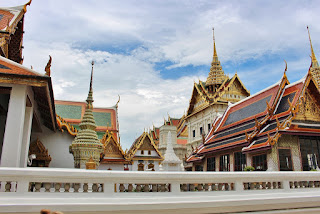 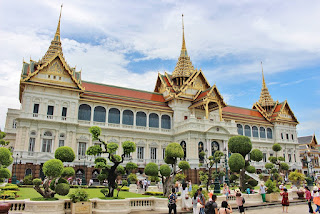 In accordance with tradition, the palace was initially referred to only as the Phra Ratcha Wang Luang - or "Royal Palace" - much like it had been the case during the Ayutthaya Kingdom. However, during the reign of King Mongkut, also known as Rama IV, the name Phra Boromma Maha Ratcha Wang or "Grand Palace" was first used in official documents to distinguish it from other palaces in the area. 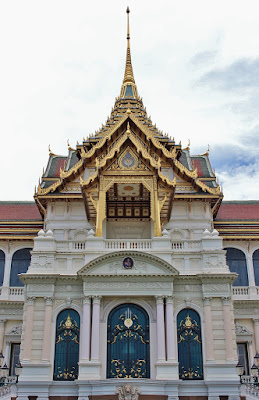 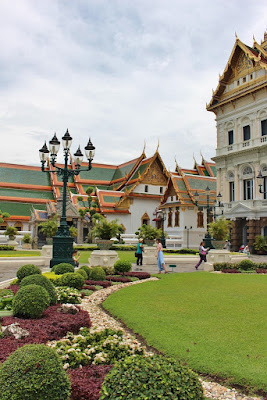 One of the main sights within the palace grounds is the Temple of the Emerald Buddha or Wat Phra Kaeo. It's centrepiece is the statue of the meditating Buddha made of a semi-precious green stone and dressed in gold. Built in 1783, the temple was constructed in accordance with ancient tradition dating back to Wat Mahathat, a royal chapel within the grounds of the royal palace at Sukhothai, the first capital of Thailand, and Wat Phra Si Sanphet at Ayutthaya, the second capital of Thailand. The robes on the Buddha are changed with the seasons by the King of Thailand forming an important ritual in the Buddhist calendar. 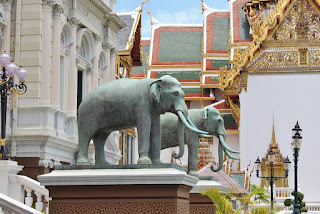 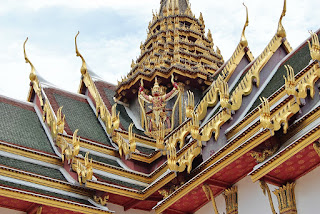 Over the course of history, the importance of the Grand Palace in the daily life of the Thai royal family, however, declined. By the 1920's, a number of new palaces, including the more modern Dusit Palace, built in 1903, and Phaya Thai Palace in 1909, were constructed elsewhere in Bangkok and began to replace the Grand Palace as the primary place of residence of the monarch and his court. By 1925 this gradual move out of the palace was complete. The growth and centralisation of the Siamese state also meant that the various government ministries grew in size and were finally moved out of the Grand Palace to their own premises. Still, the Grand Palace remains the official seat of residence of the King of Thailand and plays an important role in many ceremonies. 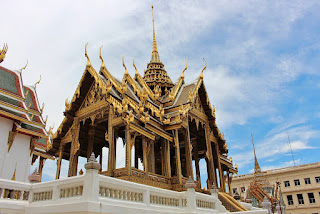 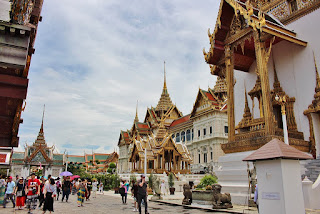 And, of course, it is a major tourist attraction: Visiting the Grand Palace, you will run into thousands of fellow visitors from all around the world. And yes, it may be incredibly crowded and you cannot see much if any of the interior but it's still very worth a visit. Trust me, you’ll find yourself in awe of the stunning artworks, carvings and detailed adornments around the place. The eclectic mix of Thai and European architecture is especially stunning and fairly unusual even in Bangkok.

Good to know:
The Grand Palace is open from 8.30am until 3.30pm each day. It is closed very rarely - and don't let anyone tell you otherwise but always make sure to see for yourself. Don’t believe anyone who says that the Grand Palace is closed today as this usually is a set up to get you on a tuktuk tour, shopping trip or a gem sale scam. Politely ignore these scammers and just walk on towards the Grand Palace. Admission for non-Thais to the Palace is 500 baht. Make sure to wear appropriate clothing including pants or a dress/skirt that extends well past your knees, a top that fully covers your shoulders and no bare feet.
2018 Central Thailand Chakri Open Thailand