Once again, spoilers ahead! 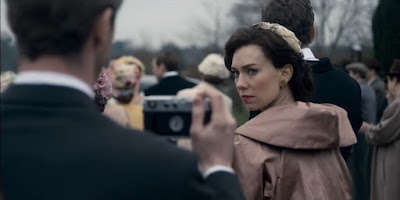 After three episodes of focusing on Prince Philip's tour of the Commonwealth and his and the Queen's marriage problems, we return to England on a more regular basis but somehow "The Crown" doesn't seem to be able to leave the marital struggles behind. This time, however, it is Prince Margaret and her struggle to find a suitable partner, because "no one wants to take me on, apparently. I'm too daunting a prospect", she describes her situation.

We first join Princess Margaret and her mother (who I'm sad we don't see more of this season) at a wedding in the English countryside. Margaret is pretty much sulking, drinking and chain-smoking all the way through it to show us her unhappiness. Enter: Billy Wallace. As Margaret complains about her lack of love prospects, he proposes to her and she accepts. Pretty much just because they’re friends and her family would accept him.

Meanwhile in bed at Buckingham Palace, at least Elizabeth's and Philip's marriage seems back on track. They even plan a dinner party for their 10th wedding anniversary "to celebrate hitting our stride", which will be a convenient way for Margaret to announce her engagement. However, her relationship with Billy will never make it down the aisle, not even all the way to the party. Being charmed by the attention of other women after word of his engagement gets out, Billy kisses - and tells. He also gets involved in a duel, which must be the most 19th century aristocratic things one can do, and Margaret calls it off.

At the party, Philip nonetheless gives an interesting speech: "It's a funny business. [In a marriage] one sees the whole of the other person, you see even that part of them that they don't see themselves, and presumably they see that hidden part of you. One ends up knowing more about one's partner than they know about themselves. And it can be pretty tough to keep quiet about it. So you have to, you have to come to an accommodation, an arrangement, a deal if you like, to take the rough with the smooth. But the extraordinary thing is down there in the rough in the long reeds of difficulty and pain that is where you find the treasure." Looks like things are indeed going well for him and Elizabeth.

Throughout the first half of this episode, we see Margaret falling apart more than once or twice. It's, however, never to poignant as when her mother and photographer Cecil Beaton try to create the perfect fairytale out of her. It is an out of touch, idealised abstraction that no one can live up to. It’s an obviously frustrating and impossible situation for Margaret, who’s stuck in an absurd fairy-tale version of a life that’s growing farther and farther from her reality.

So when she gets the chance to attend a dinner party with "normal people" courtesy of her new lady-in-waiting Elizabeth Cavendish, Margaret jumps at the chance. The actual dinner party, however, doesn't turn out to be what she imagined because pretty much everyone is awkward around her. Everyone but Anthony Armstrong-Jones. Margaret is intrigued and eventually asks him to take a picture of her. Tony's idea of an ideal portrait, a term he doesn't like, is much different to that of Beaton's and includes throwing Margaret off her game to get real emotions. At the end of the night he takes her home on his motorbike.

It's a much different life than that of Elizabeth and Philip who are just getting undressed from a state dinner that ran overtime and then going to sleep in separate beds. The photograph - in which Margaret appears to be naked - hits the papers the next day. It's a shocker to the world and nothing like the fairytale the Queen Mother wanted. (FYI, a similar photo actually exists though it was taken and released after Margaret and Anthony were married.)
CastleDrama