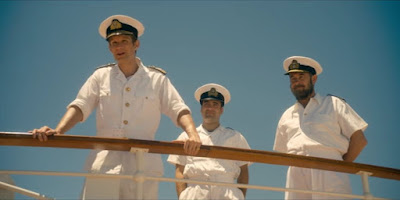 Frankly, the second season of "The Crown" thus far hasn't particularly enamoured me. The first season usually strived when we saw many of the main players get together - and thus far we haven't seen very much of that. The first episode saw the Duke of Edinburgh depart on his tour of the Commonwealth and the second episode is pretty much a glorified guys trip that even includes a beard growing competition. In the end, the focus on Philip in this episode is probably to humanise him. But first, he gives a speech about how much he loves navy life and how much he hates his official duties like opening the Olympics, "it will be hell", he says. Man, you must have a good life if opening the Olympic Games is such a horror to you.

In not too different news, his buddy and private secretary Mike Parker is one annoying chap. If you should ever find yourself part of a royal tour, don't write juicy letters about your latest adventures, sexual and otherwise, to your personal version of the "Thursday Club". It's bound to get you in trouble - and much of this episode actually revolves around how Parker's wife is contacting a solicitor to try and get a divorce - and how the solicitor's wife is a tennis partner of an acquaintance of the aunt of the sister-in-law of a palace staff and the grey men get wind of it. (Yep, it's s small world.) In general, I don't care much about the storyline considering that apparently the characters were only introduced for us to once again learn how much divorce in 1950's Great Britain is frowned upon. Thanks, we already got that courtesy of Princess Margareth and Peter Townsend for much of the latter half of the first season.

Meanwhile in London, Uncle Dickie Mountbatten is at it again conveniently explaining the viewer why the Suez crisis is just a disaster for Britain. And Elizabeth is left to pick of the pieces when her Prime Minister thinks its a good idea to leave the U.K. for Jamaica to convalescence practically abandoning the country. Generally though, all political problems are relegated to the sidelines of the second episode.

After opening the Olympics in Melbourne, Philip somehow thinks is a great idea to give an interview to a female journalist and for some reason assumes that "she is a friend, not an enemy". It's bound to be a disaster. Already the first question of the journalist, who - shocker - actually wants to ask questions doesn't sit well with the Duke of Edinburgh. Asked what he thinks of the Suez disaster, he answers "it's not my job [to give views on politics], it's not what members of the Royal Family do". At least he learned that one. The journalist digs deeper into Philip's family history and the pretty disastrous record of the Greek royal family in, well, Greece. "I learned early on not to take things for granted", is the only reply Philip gives. A bit of a surprising answer for a guy who most of the episode complains about his royal life and privileges.

When the journalist digs even deeper asking him about his feelings towards his parents, he eventually storms of after we get to see some flashbacks of young Philip seeing his mother taken away and the understatement of the century as he exclaims, "Both my mother and father played very active roles in in all their children's lives!" So there is a Philip beneath the facade. I hope though that you liked the metaphor of the stormy seas from the first episode because we get to see a whole lot more of it now. It's probably a foreshadowing of what's to come and ultimately for us to understand the Duke's position and feel sorry for him. The journalist keeps insisting that Philip must be angry at his parents and that traumatised by his childhood he must feel terribly insecure about his position. An A+ to this armchair psychologist of a journalist if there ever was one.

There's not much interaction between the royal couple at this point and the episode mostly drags along with pretty CGI images of remote places. We also get one final communications breakdown of the couple when Philip finally tries to call home but it's too bad as Elizabeth can hear him but he can’t hear her. It does a few endearing things though as he insists on bringing a rescued seaman back to his home and see him reunite with his family. He also ends up - a bit reluctantly - giving a Christmas speech from the Antarctic that finally strikes the right chords with his wife thousands of miles away as he speaks of how lonely he feels, sitting out on a boat on Christmas Day, so far away from his family. The Queen hears him and responds in her own message, telling him that their family is united and that she’s waiting for him at home.

By the end of this second episode, the royal marriage looks to be back on track and you wonder what will happen before the frosty reunion in Lisbon we already saw bits of in episode one. (Pssst, I suspect it has got to do with the annoying private secretary.) In general, I can't wait to see Elizabeth's and Philip's reunion and for this second season to gain some motion. It will also be interesting to see how much more we will get to see on the subject of Philip's own upbringing that have only been lightly touched on thus far. It's obvious that "The Crown" aims to paint a nuanced portrait of him, he is not an easy villain but despite all efforts it's also tough to take a liking to him thus far.
CastleDrama