December 11, 2017
Usually I am a firm member of Team Binge-Watch but this weekend I was otherwise occupied and so I only started to catch up on the second season of Netflix's "The Crown" now. As with season one, I am planning to review each episode at a time. To read my thought about the first season, have a look here. 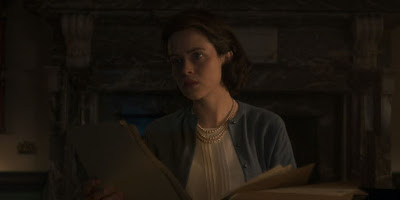 It is literally and figuratively stormy times we live in when the first episode of the second season of "The Crown" kicks off. Not only the sea in Lisbon's harbour, where Elizabeth and Philip meet again after five months, is getting rough but also what goes on in the couple's marriage. The Duke of Edinburgh is about to return from a five-month-tour through the Commonwealth that included the opening of the 1956 Olympics in Melbourne and the Queen is meeting him in Portugal in a PR move. However, the crisis handling isn't particularly succesful as "the rumours still haven't gone away", Elizabeth claims and suggests "let's lay our cards on the table ... and talk about what it needs to make this marriage work".

"You are asking my price?" Philip quips. For once, Elizabeth wants Philip to stop "whining" and any attentive viewer of the first season will probably agree with her. The Queen's husband is still as lost as ever and hasn't found a role for himself. Don't get me wrong, I'm not against this storyline of a man in the 1950's struggling with the fact that his wife is way more important than him, but by this time it gets really hard to still like Philip. What his price is, however, we will not learn yet but it looks like the question will stay with us for a while longer as we back up five months.

It's much happier times at Buckingham Palace. Philip is about to embark on his tour that he is surprisingly chuffed about considering he disliked the idea so much at the end of last season. He pays his wife compliments about "you wear the clothes, they don't wear you anymore", cheekily kisses her on the neck while in public after he asks everyone to turn around and is even invited by his wife to do star jumps in bed. You wonder where it all comes crashing down...

Meanwhile in Egypt, the Suez Crisis is unfolding. Prime Minister Anthony Eden isn't very well equipped to deal with what is going on as he doesn't seem to realise that Britain is no longer the power it once was. Bye bye, British Empire. And bye bye Eden, though more on that in a second.

While Philip is at the Lunch Club, Elizabeth wants to hide a gift and a letter in his luggage for the upcoming travels. She, however, ends up finding a portrait of a ballerina in his belongings - and there is where it all turned cold. Add a bit of mansplaining Philip at the dinner table and Elizabeth is not having it. The next day Philip is off on his tour and as he finds the letter from his wife, we see that it reads "Always remember you have a family". Makes you wonder if she wrote it pre- or post-ballerina-portrait?!

Elizabeth and Philip aren't the only ones who struggle in their marriage though. Captain Parker, Philip's private secretary, and his wife seem to be heading for divorce. As we learn from Princess Margaret - who isn't up at 11.30am and possibly still a bit drunk from last night reminding us that she was the wildest thing to probably ever come out of Buckingham Palace - Philip's guy also got a bit of a reputation of being a ladies' men and that Philip may just be "lost because of him". In other news, Margaret is still pretty mad about not being able to marry Peter Townsend. She kinda takes it out on her brother-in-law who has "Nazi sisters, a lunatic mother, and a bankrupt womanizing father" wondering why in the world he was allowed to marry her sister. News flash: He is a prince, dear Margaret, a real-life prince (of Greece and Denmark though not yet of the U.K.).

A visit by Lord Mountbatten also isn't helping to but Elizabeth's mind at ease. "You married a wild spirit, you and me both, trying to tame them is no use", he tells the Queen. Looks like everybody is out to undermine Elizabeth's believe in Philip. To make things worse, the Queen decides to go and see the ballerina in the portrait dance. Kudos to Claire Foy, who plays Queen Elizabeth II, for what follows: An almost anxiety attack at the theatre.

Back on the Suez front, Queen Elizabeth - after a bit of meddling by the always meddling Uncle Dickie Mountbatten - figures out that not everything the Prime Minister intends is quite kosher. Turns out he has colluded with Israel (and France) to solve the crisis. Not the best of ideas and Elizabeth knows it. She, however, still gives her support because "the Prime Minister always has the Sovereign's support" - and so the bombs start falling, the tanks rolling and the machine guns firing. It is one of the final chapters of a supreme British role in the world and not the only door closing.

Back at Buckingham Palace, Elizabeth stares from her own bed at her husband's empty bed three rooms away. She gets up and closes the doors. Will they open again? That's probably a question that will remain with us for much of the second season of "The Crown". Let's hope that the authors will find some redeeming qualities about the Duke of Edinburgh and give some good answers why he acts the way he does. Cause it's awfully difficult to like him right now. All in all, a pretty gloomy start to the second series after all the splendours of the first season. It's going to be interesting how it all unfolds...
CastleDrama