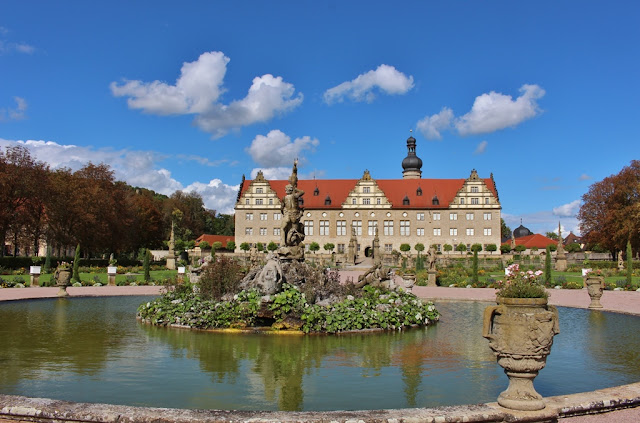 Being a bit of a castle adventurer, it will not come as a surprise to any regular reader of this blog that I have visited a fair number of castles in my lifetime and have read about even more. Schloss Weikersheim, however, even took me by surprise. Frankly, I had never heard about it before I went to Franconia earlier this year to visit Würzburg and go to see that royal wedding. Rather spontaneously, I decided to google for a few more castles in the vicinity of Würzburg and stumbled over this gem in the tiny town of Weikersheim in Baden-Württemberg. A former home to the Hohenlohe family, wandering through its gardens somehow reminded me of a cross between France and Tuscany. 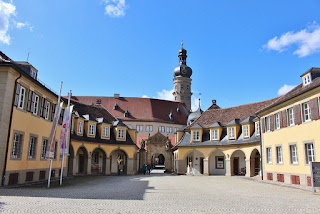 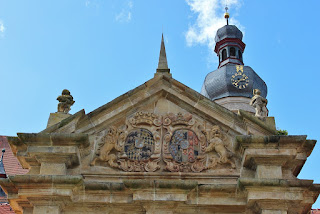 Nestled in the hilly vineyards close to the Main and Tauber rivers, the origins of today's castle lie in the 12th century when Konrad and Heinrich of „Wighartesheim“ were firstly mentioned. Heinrich later took the name "Hohenloch", which would evolve into "Hohenlohe" over the years. Until 1586, only several smaller changes were made to the moated castles. That same year, however, Count Wolfgang II of Hohenlohe(-Weikersheim), who was married to Countess Madgalena of Nassau-Dillenburg, a sister of Willem of Orange, came into the possession of the castle and made it his residence. 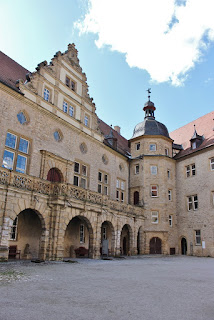 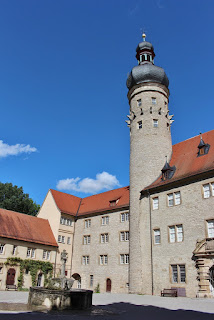 Count Wolfgang had travelled extensively through Europe, especially France, Austria and England, and the art-loving and enlightened Renaissance ruler decided to expand Weikersheim into a castle befitting his status. The scenic landscape of the Tauber valley allowed Count Wolfgang to build a representative castle surrounded by extensive gardens. The original plan for the castle was to create an equal-sided triangle. The third side, however, was never completely finished due Wolfgang running into financial difficulties. Nonetheless, the castle that was built pretty much reflects the Renaissance ideal of a country estate in part already foreshadowing the Baroque era that was to come. 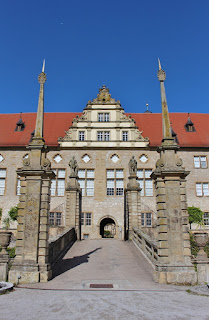 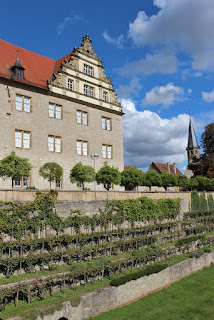 By 1605, much of the new Schloss Weikersheim was finished. The richly decorated Knights' Hall is both a highlight of the Schloss and Renaissance architecture in southwestern Germany in general. Dating from 1600, it is one of the best preserved halls of its kind from that era. One of the most knowledgable and enthustiastic guides leading through the castle as well as music being played when entering the Rittersaal made it especially enjoyable to visit. Count Wolfgang was a keen alchemist and his wife Madgalena ran a pharmacy in the Schloss, which today offers special exhibitions about their favourite pastimes. 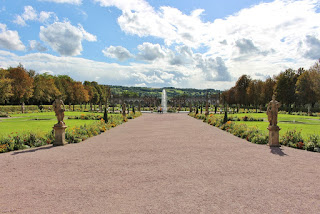 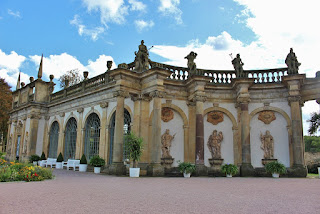 Count Wolfgang died in 1610 aged 64. Only a few years later, the Thirty Years' War broke out. It did not only put a halt to all further building activities on Schloss Weikersheim but was also looted by the troops of Count Johann von Werth in 1634. Only in 1679, Wolfgang's grandson Count Siegfried began to refurbish the castle though it remained empty for the most part. In 1709, Count Carl Ludwig of Hohenlohe became the new owner of the Schloss after a new division of assets within the family. He married Princess Elisabeth Friederike of Oettingen-Oettingen, who wasn't only of higher standing than the count but also brought along quite a bit of money. With his wife's dowry, Count Carl Ludwig started to remodel the castle according to the tastes of the time. During the first half of the 18th century, much of the castle as well as its gardens were turned into a Baroque dream. 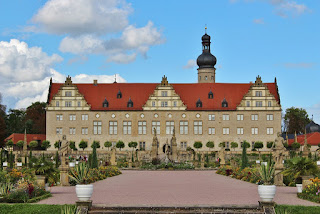 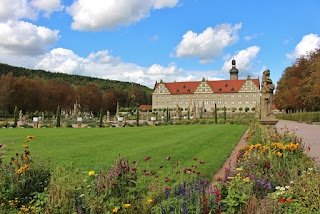 After Carl Ludwig's and Elisabeth Friederike's deaths, however, the Schloss was pretty much frozen in time - one of its most endearing aspects when visiting today. The couple died without surviving offspring and so their residence fell back to the other lines of the Hohelohe family. While they occasionally visited during the summer months, the castle was mostly left to itself and no changes have made to its in- or exterior since the times of Count Carl Ludwig. 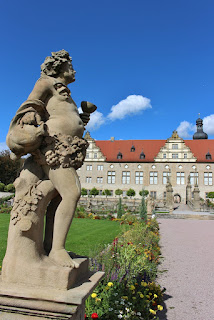 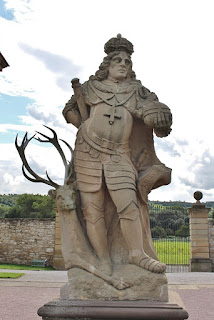 Only after the Second World War, Schloss Weikersheim was waken from its 200-year sleep. Prince Constantin of Hohenlohe-Langenburg, who had fled from Bohemia, was given the castle by his relatives. Himself an artist, he founded an art school within the castle and opened in to the general public. With the entrance fees, he slowly started to renovate the building. The Schloss also became home to annual chamber music courses during the summer months. After Prince Constantin died in 1967, the castle was bought by the state of Baden-Württemberg, who have been the owners ever since.

Good to know:
Schloss Weikersheim is open to the public between April 1 and October 31 from 9am to 6pm and between November 1 and March 31 from 10am to 5pm. The last guided tour starts an hour before closing time. The Schloss is closed on December 24 and December 31. Admission per adult is 8,50 euros. There are also several additional exhibitions apart from the guided tour. When I visited earlier this year, the apartments of Elisabeth Friederike were closed for renovations. For more information, have a look here.
Baden-Württemberg Germany Hohenlohe Main-Tauber Open