I guess wishes do come true sooner than expected sometimes. A few months ago, I bought a book about German castles and palaces that had a shot of the interior of a Schloss I had never heard about before on its cover: Schloss Weissenstein. As soon as I saw it, I knew that I had to visit one day as it was absolutely gorgeous. When I realised that it is not too far from Würzburg, there was no way I could not visit - and so I did. Located in the Upper Franconian district of Bamberg in Bavaria, Schloss Weissenstein (or Weißenstein as it is written in Germany) is also sometimes called Schloss Pommersfelden, the name of a small village nearby. Coming from Würzburg, the castle lies somewhere in the middle of nowhere, but once you pass that little hill and get your first glimpse, it's a sight to behold. The Schloss is a Baroque masterpiece, that owes its existence to Count Lothar Franz of Schönborn and is still owned by his family. 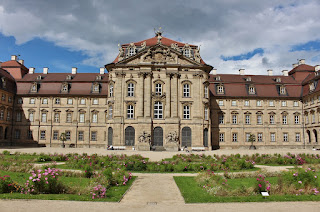 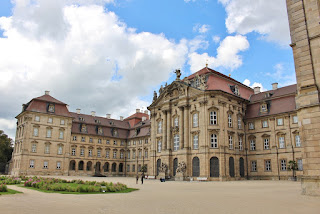 Count Lothar Franz (1655-1729) was the son of Count Philipp Erwein of Schönborn and Maria Ursula of Greiffenclau-Vollraths. Like many family members before and after him, Lothar Franz became a clergyman of the Catholic church eventually rising to the rank of the Prince-Bishop of Bamberg and Archbishop and Elector of Mainz. In 1710, he inherited the estate in Pommerfelden including a small moated castle. As luck (and probably skill and bribes) had it, he helped ensure the election of Habsburg ruler Karl VI as Holy Roman Emperor the following year and the Emperor, in turn, rewarded him with a gift of 100,000 gulden. 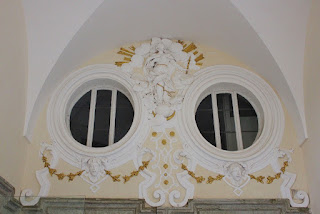 Lothar Franz decided to put the money, which equals millions of euros today, to good use and had the idea to turn the castle in Pommersfelden into a summer residence for his family. However, as the original plans weren't quite to his tastes of style and grandness, he instead decided to built a totally new palace befitting his rank. And thus he ordered the construction of a palace paid for from his reward and further personal wealth. He commissioned a team of architects including Johann Dientzenhofer, who had previously built the cathedral in Fulda and the church at Kloster Banz, Johann Lukas von Hildebrandt, the court architect of Emperor Karl VI, and Maximilian von Welsch, who had previously worked on the Festung Mainz for Lothar Franz. 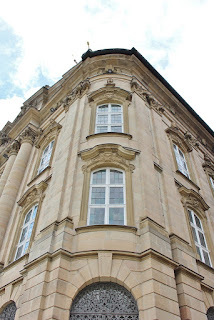 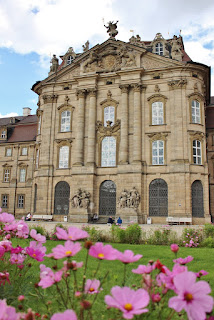 As the Prince-Bishop/Archbishop-Elector was already of an advanced age, ultimately reaching the age of 73, construction started soon in 1711 using local sandstone material. Originally called "new palace on the hill" by locals, Lothar Franz made his intentions known to call it "Weissenstein" (white stone) three years into construction. However, the name never really caught on and neither did the later suggested name Lothariusburg after its builder. Instead, the name Schloss Pommersfelden, after a small nearby village, has oftentimes been used throughout history. Construction took eight years and was finished in 1719 with its Baroque grand stairway being the first one of its kind in Germany. The stairway was personally designed by Count Lothar Franz. 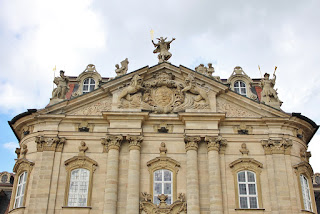 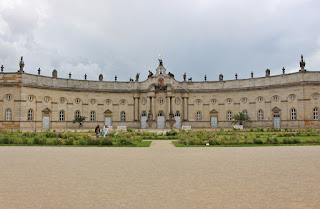 The interior decoration was finished in 1723 with works by Johann Michael Rottmayr, Johann Rudolf Byss and Giovanni Francesco Marchini. Special highlights include a sumptuously decorated grotto hall, the thick walls of which support the marble hall above it. The mirror cabinet designed by Ferdinand Plitzner is the oldest fully intact example of its kind in Germany. Its location in the middle of nowhere probably saved the palace from much destruction apart from a spell during the Seven Years' War when it was attacked and damaged by Prussian troops. 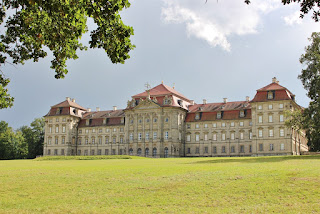 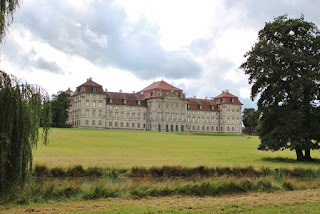 After the death of Lothar Franz in 1729, the palace was inherited by his nephew Count Friedrich Karl of Schönborn, whose descendants have owned it ever since. It was Friedrich Karl who expanded the gardens that were later turned from formal Baroque gardens into an English landscape park in 1789. Still today, there is a free roaming herd of deer directly behind the castle. But not only the palace's architecture and surrounding park are worth a visit. The palace is home to the largest privately owned art collection of old masters in Germany including works by van Dyck, Rubens, Brueghel, Giordano, Tizian, Artemisia Gentileschi and Dürer. Impressively the entire collection is still completely preserved in its original state. In addition, there are annual modern at exhibitions in the palace, this year with works by Maria Theresia von Fürstenberg. 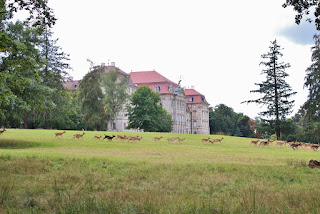 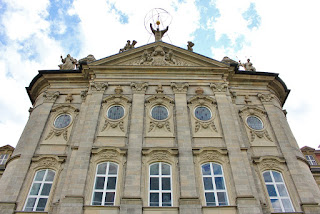 I'm no expert but Schloss Weissenstein also seems to be in excellent shape with regular restoration works going on, which is always amazing to see, especially for family-owned buildings. To preserve it for future generations, it was integrated into a non-profit foundation in 1996 by the family with one family member acting as the administrator of the foundation. To this very day, the Schloss is still used by Counts of Schönborn(-Wiesentheid) as their summer residence. It may be a bit out of most tourist's way, but it's definetely in the top five of my favourite German castles - so go and see it, if you get the chance!

Good to know:
Schloss Weissenstein is open to thepublic from April to October between 10am and 5pm with the last tour starting at 4pm. Admission is eight euros per adult. The park costs one euro per adult and is open the whole year round. For more information, have a look here.
Archbishops of Mainz Bamberg Bavaria Bishops of Bamberg Germany Schönborn