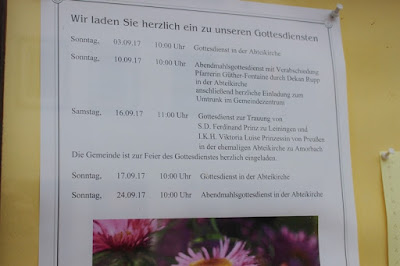 About two and a half months ago in Hanover, I caught royal wedding fever. With another royal wedding looming on the horizon, I decided to make it a long weekend trip to Würzburg and the neighbouring Odenwald region in the southern part of Germany to see a few castles - more on those in the weeks to come - and the wedding of Ferdinand of Leiningen and Viktoria Luise of Prussia. Hereditary Prince Ferdinand is the oldest son of the Prince of Leiningen, Andreas, and his wife Alexandra, née Princess of Hannover, while Princess Viktoria Luise is the only daughter of the late Prince Friedrich Wilhelm of Prussia and his second wife Ehrengard, née von Reden. So it was quite a big royal wedding in the small town of Amorbach. 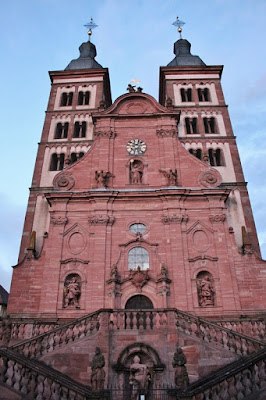 In order to get a good spot, arriving early to a royal event is key. While the wedding was supposed to start at 11am, I arrived to the square in front of the stunning baroque church of the Princely Amorbach Abbey roughly shortly before 8am. I was joined for the great wait by Stefan of Royal Travel and Events as well as other royal watchers and a few photographers. Soon some barriers were put up and we wondered where we would be able to stand. Us arriving so early must have impressed the people handling the press for the princely family as we were allowed to stand in the press section thus getting an amazing spot to see all the guests arriving. 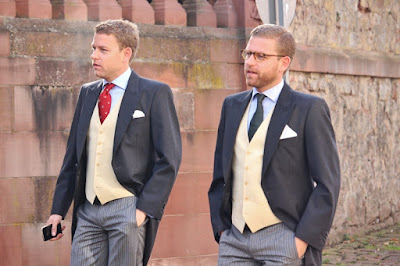 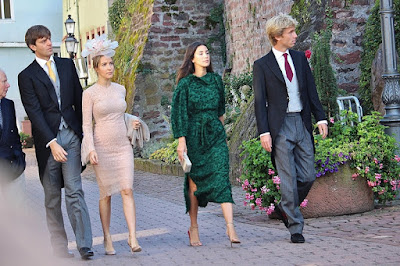 Soon after, the first guests started to arrive. Some came from the back of the church from where they had to walk down a flight of stairs to walk up again to the church's doors passing us. Others were shuttled to the church by buses. While the first bus stopped pretty much in front of us blocking the view of the guests, the security later handled it that the buses would stop a bit further away and the guests had to walk the last few metres to the church offering the photographers a better view. A handful of guests, namely the Hanoverians, also came down the street from the left side. It probably means that they either stayed with the Leiningens at their residence or parked there. (Genealogy check: The Princess of Leiningen is a born Princess of Hanover and aunt of the current Hereditary Prince.) 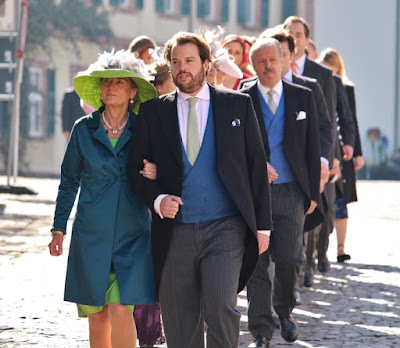 After all the guests had arrived - see here, here, here and here for my pictures - a small bus stopped further up the road and it turned out that it was much of the wedding party, save for the bride. Hereditary Prince Ferdinand let the cortege together with his mother. He was joined by his father and mother-in-law as well as his siblings, siblings-in-law, the Prince and Princess of Prussia, and the witnesses as well as the bridal children. The witnesses were Countess Margherita of Arco-Zinneberg, Princess Olga of Leiningen, Princess Dorothea of Ysenburg und Büdingen, Prince Otto of Castell-Rüdenhausen, Cédris Frère and Hubertus von Wedel. The bridal children included three Prussian princes, three Erbach-Fürstenaus and an Oldenburg. As Princess Sophie of Prussia asked the evening before that no pictures of her sons, who were page boys, would be taken, I decided not to share any of them from the wedding day either. 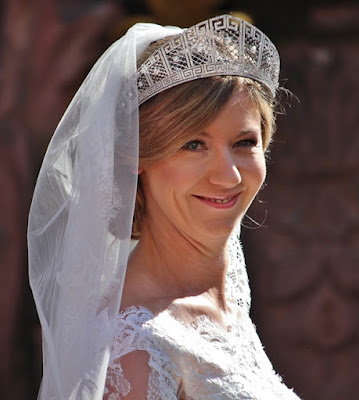 After the groom and the others made their way into the church, the bride arrived shortly after 11am. After she got out of the car, Princess Viktoria Luise kindly turned around and gave everyone a big smile matching the sparkle of the stunning Prussian Meander Kokoshnik Tiara she wore. It is the same tiara her grandmother Grand Duchess Kira of Russia wore on her wedding days to Prince Louis Ferdinand of Prussia. Some say that the tiara was too big for the bride, but I would contest that - cause can a tiara really be too big? Go big or go home, I say! 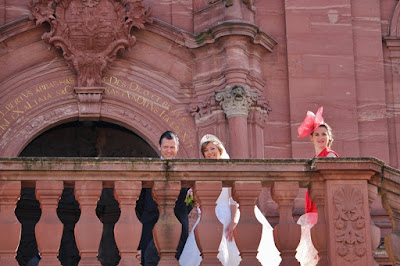 Subsequently, the bride and her older brother, who walked her down the aisle, walked the steps up to the abbey's church. They also took the time to turn around once more before they arrived at the church's doors to give a quick wave to the crowd. The doors opened and they made their way in to Wagner's Bridal Chorus from Lohengrin, if I recall correctly. 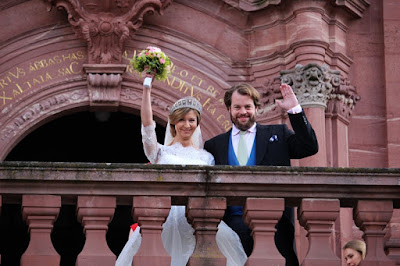 An hour and about 15 minutes later, the doors opened again and the bridal couple left the church to the Prince of Denmark's March by Jeremiah Clarke. They walked towards the balustrade waving to the onlookers who had gathered. They were quickly joined by the groom's parents as well as the bride's mother and her younger brother Prince Joachim. Then came the (first) wedding kiss and I tell you, it's not as easy to capture them as it looks on photos. As it turned out, I actually missed the kissed on camera but luckily there was another one to come later on. 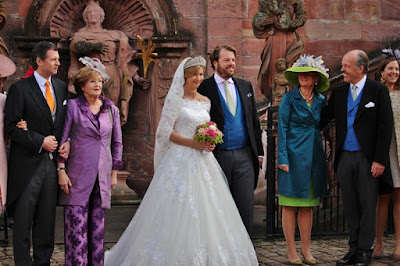 The new Hereditary Prince and Hereditary Princess of Leiningen then made their way down the stairs and posed for another picture before being joined by their whole families and witnesses for a group shot. Many of the other guests also stood on the church's steps to see the couple off. I recall a moment when Princess Viktoria Luise exclaimed that someone was standing on her veil and in my pictures it looks as if five people are simultaneously trying to sort her veil - it's sometimes tricky being a bride and wearing a gorgeous gown. 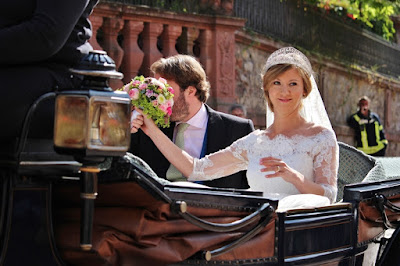 After a few minutes, a carriage drawn by two horses came down the street and the couple got into it. There I took my funniest shot of the day that looks like the Hereditary Princess is shoving her bouquet of flowers in her husband's face. Speaking of shots: I also got another shot at the wedding kiss and a good shot I did take as the couple briefly kissed for a second time. The newlyweds both seemed very sweet and delightful. Then the carriage drove off bringing the couple probably to take private pictures and then to the reception. Their guests either went to the reception by bus and car or simply walked the short distance. 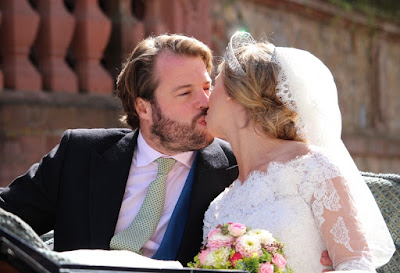 Yours truly and a few other royal watchers then had tea and coffee and cake at a café nearby, before I decided to call it a royal wedding day to go to Erbach to visit the local castle. Had I waited a little longer, I would have had another chance a getting a glimpse at the guests leaving the reception, including some previously unseen ones. But, you know, I'm too much of a castleholic for that...
Event Ferdinand and Viktoria Luise Wedding