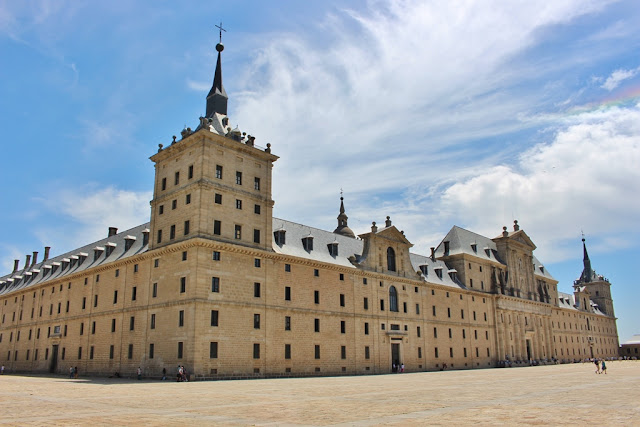 Real Sitio de San Lorenzo de El Escorial - what a name! Located northwest of Madrid, the Royal Sight has functioned as a monastery, basilica, royal palace, pantheon, library, museum, university and hospital over the years. And believe me, no picture does it justice just how massive this place is. In fact, El Escorial is nothing less than the world's largest Renaissance building featuring one of the most beautiful libraries I have ever laid eyes on though unfortunately you aren't allowed to take pictures inside the complex. 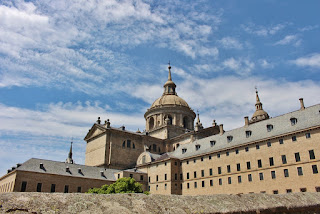 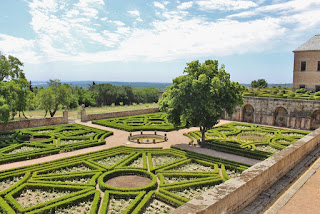 When King Felipe II of Spain took home victory in the Battle of St. Quentin in Picardy against King Henri II of France on the Feast of Saint Lawrence in 1557, he swore to erect a monument dedicated to the saint. The King's astrologers chose the small village of El Escorial in the hills near Madrid as the perfect location. The works began on April 23, 1563 and lasted for more than 20 years. Felipe II appointed the Spanish architect Juan Bautista de Toledo to be his collaborator in the design. Toledo had already previously worked on St. Peter's Basilica in Rome and participated in several projects in Naples. Together the King and the architect designed El Escorial as a monument to Spain's role as a centre of the Christian world. When Toledo died in 1567, he was succeeded in his position by Juan de Herrera. 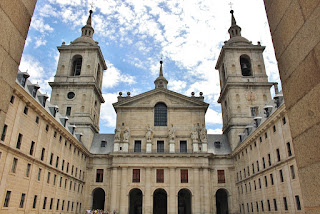 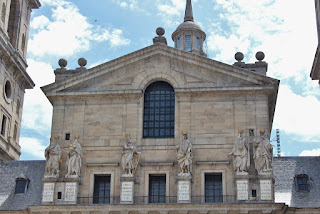 While the exterior of the monastery and palace is monumental measuring approximately 224 by 153 metres and reminding more of a fortress than a monastery or palace, the interior is decorated with numerous frescoes, one more beautiful than the other. The floor plan of the building is in the form of a gridiron, sometimes thought to refer to Saint Lawrence who died as a martyr by being roasted to death on a grill. Another more plausible theory for the building's shape seems to be the following one: The idea of the floor plan may also be based on descriptions of the Temple of Solomon by the Judeo-Roman historian, Flavius Josephus: A portico followed by a courtyard open to the sky, followed by a second portico and a second courtyard, all flanked by arcades and enclosed passageways, leading to the "holy of holies". 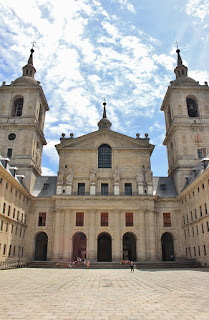 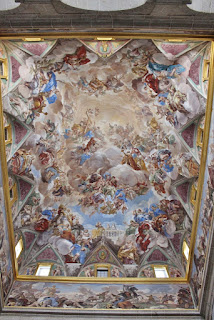 King Felipe II instructions to Toledo were simple and clear, directing that the architects should produce "simplicity in the construction, severity in the whole, nobility without arrogance, majesty without ostentation." During the building process, the plans for El Escorial were enlarged a number of times to accomodate all the different functions Felipe II wished the Real Sitio to have. In addition to being a ecclestical and royal residence, El Escorial also became the burial place of most of the Spanish kings of the last five centuries, Habsburgs as well as Bourbons. The Pantheon of the Kings and the Pantheon of the Princes are without a doubt two of the most impressive and interesting parts of El Escorial. 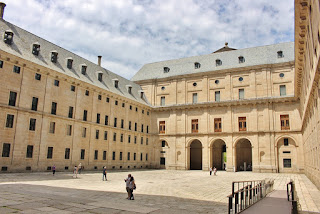 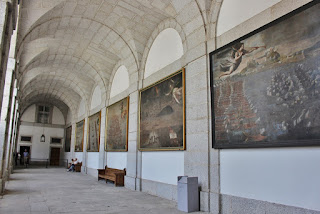 While Felipe II ruled Spain from El Escorial for the latter part of his life, most of his successors didn't fancy the place very much. Nonetheless they spent time at the complex as court protocol dictated it as a royal residence for part of the year. Both the Habsburg and Bourbon apartments can still be visited today. In 1861, however, the Real Sitio de San Lorenzo de El Escorial ceased to be a royal residence. In 1984, the complex featuring around 2,000 rooms, 3,000 doors, 2673 windows, 16 courtyards, twelve cloisters, 88 fountains and 86 staircases was declared a UNESCO World Heritage Site.


Good to know:
The Real Sitio de San Lorenzo de El Escorial is open daily from April to September between 10am and 8pm; between October to March it closes two hours prior and it may be closed on certain dates. Admission per adult is 10 euros. For more information, have a look here.
Borbón Habsburg Madrid Spain