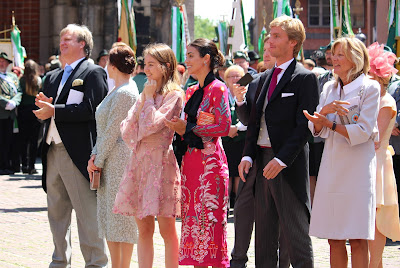 Our spot got even more perfect when the couple's families followed them and stood basically in front of us to see them off. It was Prince Christian, who was the bestman, who led a load cheer to his brother and new sister-in-law together with his fiancée Alessandra de Osma, Princess Alexandra, Princess Chantal as well as Ekaterina's parents and siblings. We were in a great spot to take pictures of them all, before they went to the other side of the church. The carriage with a smiling bridal couple then drove directly past us and so we could get another glimpse of them. Some guests then left the church through a side entrance, which meant that we could get look at them again.
Once everyone had left the church, I suggested to walk around the building on the side were no guests were and see if we could see anyone on the other side - and it turned out to be a stroke of genius! Already on our way, we noticed Hereditary Prince Hubertus of Saxe-Coburg and Gotha, Prince Alexander of Schaumburg-Lippe and his partner putting bags in a car and snapped a few pictures of them. Hereditary Princess Kelly of Saxe-Coburg und Gotha was already sitting in the car, so I could only take a picture of her back.
Once we arrived on the other side of the church, we could see lots of guests waiting for cars and buses there. The area was also closed off and several rows of people were in front of us, so we could only hold our cameras up, take pictures and hope that we would recognise someone in the pictures later on. And then it happened: Prince Christian of Hanover and Alessandra de Osma walked towards the exit we were standing at together with Crown Prince Pavlos of Greece, Crown Princess Marie-Chantal and three of their sons. Apparently they wanted to get in a car, but there was no car. So for a good minute we basically stood two metres away from them and could take several pictures. They then walked back and got into a car in the square next to the church. We could also see Andrea Casiraghi and the boyfriend of Princess Alexandra heading off into the pedestrian area of Hanover. No idea what they were up to.
After the service, the church was open to the public to admire the decoration. While inside, I managed to snatch myself a wedding programme. Unfortunately, some people started to take apart the floral decoration and take some flowers home. That was very awkward. At least in the tiny village were I come from, you leave the decorations in the church so it will be prettily decorated for the next mass.
With all the royal guests gone, we decided to head to Herrenhausen. The reception after the wedding was to take place there though we were already pretty certain that we wouldn't be able to see much. So we decided to walk there, which takes about half an hour, which was really nice after all the standing, plus Arjan got to see some of Hanover's royal sights. Funny thing: On our way to Herrenhausen, we could see the traces of carriage - and that it didn't always go straight. We could also hear some of the music played at the reception by the House Orchestra of the Prince of Hanover.

As we expected, there was not much to see at Herrenhausen as everything was closed off and screens put up. If you were patient, you could have waited in front of the gate to see guests arriving and leaving though we were certain that most of them were already inside. So we decided to call it a royal watching day and instead headed into the Great Garden for some royal relaxation. Funnily while we were sitting at the Great Fountain, there were some guests of the wedding who walked through the garden as well. We left at around 4pm as Arjan still had to go back to the Netherlands and I also decided to head home.
A big thank you to Arjan (and everyone else I met around the wedding) for keeping me company and making an even more enjoyable day! It was a great experience, not just because of all the royals we got to see. We were a bit hesitant in advance as the information released didn't sounds like we would get to see a lot of the wedding, but it was better than what we could have even imagined. More pictures of the wedding here, here and here with more still to come, so make sure to check back again in the coming days. Also, go follow Arjan on Twitter as he is just a delight to be around.
Ernst-August and Ekaterina Event Guelphs Wedding