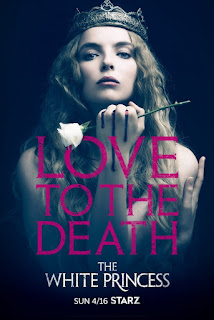 After "The White Queen" comes "The White Princess": This time the adaptation of Philippa Gregory's novel focuses on Elizabeth of York and King Henry VII, first ruler of the Tudor dynasty. Elizabeth, or Lizzie as she is known in the series that aired between April and June of this year, was the daughter, sister, niece, wife, mother and grandmother of successive Kings and Queens of England. Her marriage to King Henry VII was one of the final acts of the Wars of the Roses uniting the York and Lancastrian claims to the throne.

Historically, Elizabeth didn’t play a very prominent role in the politics of the day and was more of a pawn in her mother Elizabeth’s (The White Queen's) games. "The White Princess" over the course of the series tweaks Lizzie into being the master of her own fate. While despising Henry in the beginning, she eventually falls in love - or at least grows to fondly appreciate - him. It's kind of a backwards love story that is historically actually accurate. To give the storyline a bit more interest, the series also plays on an alleged affair between Lizzie and her uncle King Richard III, the last Plantagenet king who was killed in the Battle of Bosworth by Henry VII.

In difference to its prequel "The White Queen", I was quite intrigued by "The White Princess" over the first half of the series. This time around the main characters are portrayed by much stronger actors. However most characters apart from Elizabeth and Henry are set in their ways from beginning to end while the series actually portrays events of one and a half decades. These unchangable surroundings make it feel like "The White Princess" is stuck in telling a story that isn't evolving. The second half - for my taste for far too long - plays on the question whether Perkin Warbeck was indeed Richard of Shrewsbury, Duke of York, Lizzie's younger brother who potentially wasn't murdered by Richard III as one of the 'Princes in the Tower' but survived.