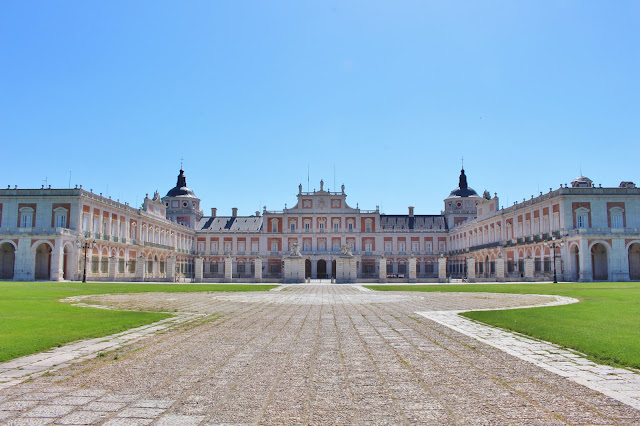 A 45-minute train ride away from central Madrid lies the town of Aranjuez famous for its asparagus, strawberries and a royal palace: The Palacio Real de Aranjuez. It was the year 1523 when the palace became a royal residence by decision of Holy Roman Emperor Carlos (Karl) V. He gave the estate the dignity of Real Bosque y Casa de Aranjuez (Royal Wood and House of Aranjuez) using it for his hunting trips when in Spain. Previously, the estate had belonged to the Order of Santiago. 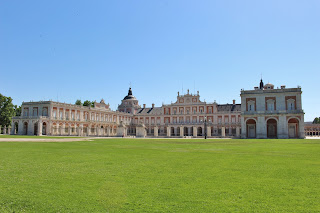 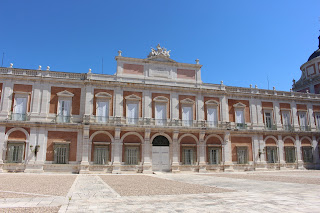 Already in the 15th century, the order's grandmaster Lorenzo I Suárez de Figueroa ordered the construction of a palace located to the north of the present Palacio Real to be used for recreational purposes by the members of the order. In the reign of Carlos V improvements were carried out by Luis de Vega (from 1537).

Carlos' son, Felipe II commissioned architects Juan Bautista de Toledo and later Juan Herrera to extensively enlarge the royal residence in Aranjuez. He envisioned the estate as a large Italian-inspired villa. The palace of Aranjuez was built in a combination of white stone from Colmenar de Oreja and brick, giving a two-toned effect that was adopted for the rest of the palace. In 1571 work began on the cuarto nuevo, as the new palace was described, beside an already existing chapel. However, the Palacio Real as planned in the 16th century was not completed as after Felipe II's death in 1598 both interest and financial means declined. 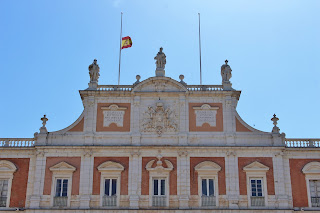 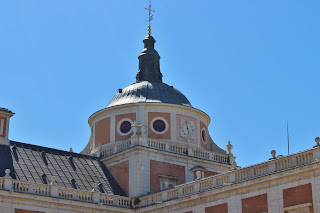 It was Felipe V of Spain, the first king of the Borbón dynasty, who took a new interest in the palace of Aranjuez. From 1715, a north wing was added by Pedro Caro Idogro, the western facade completed and the structure that would shape the current palace charted. Felipe originally envisioned Aranjuez as his own Versailles though he later abandoned the plans in favour of a new palace near Segovia, the Palacio Real De La Granja de San Ildefonso. 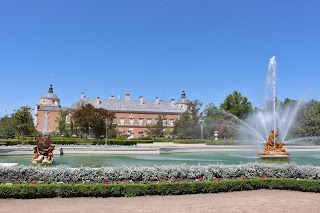 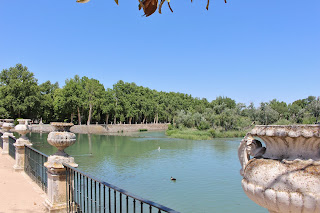 In 1748, Aranjuez Palace as well as the surrounding town were heavily damaged by a fire. King Fernando VI, Felipe V's son, decided to rebuild the palace and commissioned Giacomo Bonavia to restore both palace and town. He was responsible for the vestibule, the great imperial staircase and the main facade (1744), in the centre of which is a portico surmounted by the ceremonial balcony of honour. It was also Bonavia who added a third storey to the palace. Three statues on the balustrade of Felipe II, Felipe V and Fernando VI - the three Kings most invested in the creation of Aranjuez - by Pedro Martinengo were added in 1752.

Fernando's palace was enlarged under Carlos III (1716-1788) in order to meet the increasingly elaborate etiquette of the court. Two wings at right angles to the main facade, forming a U-shaped entrance courtyard in the French manner, were added by Francesco Sabbatini in the 1770's. Carlos liked his palace in Aranjuez so much that he made it his summer residence moving the court from Madrid in mid-March only returning to the capital in October. 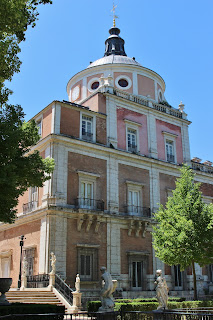 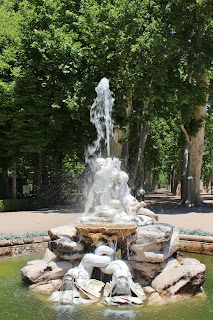 The Palacio Real de Aranjuez is surrounded by several extensive gardens. A small palace for Carlos' son and heir, the future Carlos IV, and his wife Maria Luisa of Parma, was built in one of them: the Casa del Labrador. On March 18, 1807, Aranjuez was the scene of a popular uprising known as the Mutiny of Aranjuez that brought about the end of Carlos IV's reign. The revolt was led by soldiers, peasant and the general public who supported Carlos' son Fernando. The mutineers made King Carlos dismiss his Prime Minister Godoy, who was deeply unpopular, and, two days later, the court also forced the King himself to abdicate in favoor of his son and rival, who became Fernando VII. 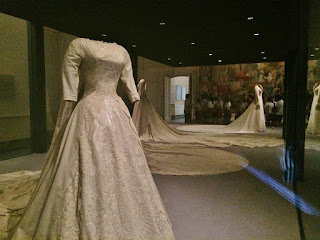 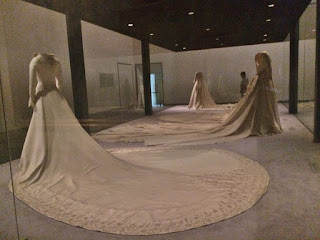 Following the restoration of the Borbóns to the Spanish throne - after a short-lived reign of a Savoy prince and an unsuccessful Spanish republic - in the person of Alfonso XII in 1874, the Palacio Real de Aranjuez was temporarily used by the Duke of Montpensier. His daughter, Mercedes, became the first wife of Alfonso XII though she died only six months after the wedding from typhoid fever.

With the family of Mercedes ended Aranjuez's days of royal splendour. Both Alfonso's second wife, née Archduchess Maria Christina of Austria as well as his son, King Alfonso XIII and his wife Ena preferred the Palacio Real De La Granja de San Ildefonso as their summer residence. These days, the Palacio Real de Aranjuez is open to the general public though unfortunately you are not allowed to take pictures inside the palace. 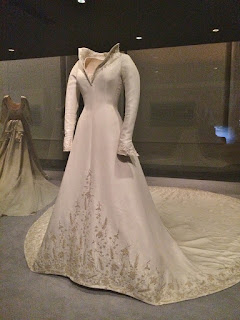 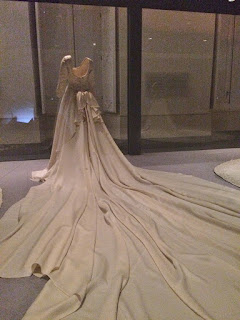 A special treat of the exhibition are several wedding dresses of the Spanish Royal Family. Shown are the dresses of Queen Letitia, Queen Sofia as well as Infantas Elena and Cristina. In addition, the uniforms and dresses worn by King Juan Carlos and Queen Sofia during his proclamation as King. I was most enchanted by Queen Sofia's wedding dress that features many more details in its design than I previously realised. Unfortunately non of my quickly snapped pictures do the dresses any justice - so I guess it is best if you simply go and see for yourself!

Good to know:
The Palacio Real de Aranjuez is open from April to September between 10am and 8pm. During the winter months the palace closes two hours earlier. The palace is closed on January 1 and 6, May 1, December 24, 25 and 31. Admission per adult is 9 euros. For more information, have a look here. When you visit Aranjuez also make sure to visit all the royal gardens, which will take several hours.
Borbón Habsburg Open Spain