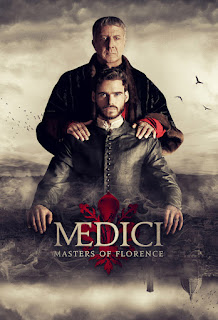 Renaissance Italy is an utterly fascinating era - and so the start of turn from the Middle Ages to modern history always makes for interesting TV. One name that is intertwined with the tide of times like few others is that of the Medicis. The Italian banking family, political dynasty and later royal house began their rise to greater prominence under Cosimo de' Medici in the Republic of Florence during the first half of the 15th century. It is also Cosimo who plays the central role in the television drama series "Medici: Masters of Florence", which begins with the violent death of Cosimo's father. What follows is a as much a political and family drama as a murder mystery.

While I felt that the show was a bit slow to set up the scene as a whole, I was still hooked pretty quickly. The show tells the story of the rise of the family and that "sometimes you have to do bad to do good", as Giovanni de' Medici says at one point. While he dies after only a few minutes, the show's present day events are interspersed with flashbacks to 20 years earlier to tell us how exactly we got to wear we are in the series. Especially intriguing is the portrayal of Cosimo's wife Contessina, who gives the phrase 'stand by your man' a whole new meaning. The acting we see along the way, the views of 15th century Florence and the costuming of "Medici: Masters of Florence" are all pretty outstanding. It makes you want to jump on the next plane and discover the city yourself (or travel back in time to see Renaissance Italy for yourself but make sure you are on the right side of history, it will get bloody otherwise)!