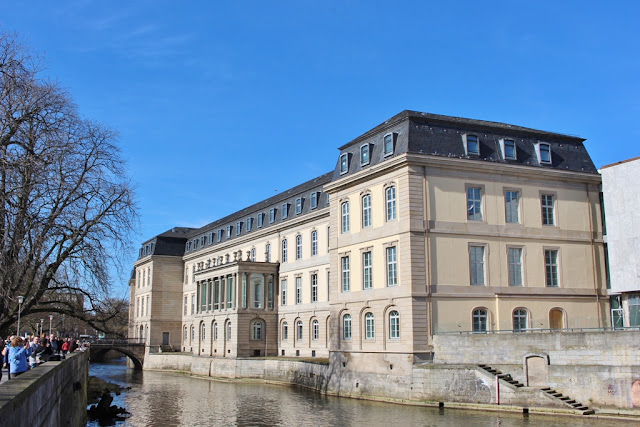 Do you recall Duke Georg of Brunswick-Lüneburg, Prince of Calenberg from my recent post about the rivalry between Brunswick and Hanover? It was he who elected Hanover as his new residence after the redivision of the territories of the House of Guelph in 1636 after the death of Friedrich Ulrich of Brunswick-Lüneburg. However, Hanover had been pretty much a backwater until that point in history and when good old Georg came to the city, there wasn't really a proper royal home for him to move into. And what do you do when you are a nobleman and have no residence to move into? Of course, you build one.

Thus starts the history of the Leineschloss in Hanover, today the seat of parliament of the German state of Lower Saxony. The first building on the banks of the Leine river was a Franciscan friary, constructed in about 1300 and abandoned in 1533 after the Protestant Reformation. In 1636, Duke Georg began construction of a new palace on the site as his residence. This first Leineschloss was a rather modest half-timbered building reflecting the trying times of the Thirty Years' War.

Georg's third son Johann Friedrich had a family crypt as well as a Capuchin monastery erected in the palace starting in 1665. The monastery was dissolved again 15 years later by his younger brother and successor, the future Elector Ernst August of Hanover, whose wife may be more familiar to you: A certain Electress Sophie, whose legitimate Protestant descendants make up the line of succession to the British throne (to put it simply and leave out all the bits about being married to a Catholic prior to a certain point in time). It was the same Ernst August who bought surrounding buildings to tear them down to give his palace more room to be palatial. He also added a opera house to the palace encompassing 1,300 seats.

Ernst August's and Sophie's son Elector Georg Ludwig, again possibly more familiar to you as King George I of Great Britain, had the interior of the Leineschloss refurbished according to the tastes of the time. At the time, there was a busy court life going on in Hanover with guests including Georg Friedrich Händel, Tsar Peter the Great, John Churchill, 1st Duke of Marlborough, as well as Prince Eugen of Savoy visiting the palace on the Leine river. Georg Ludwig became George I of Great Britain in 1714 and while construction works continued, for the following 123 years - until the end of the personal union between Great Britain and Hanover - the Leineschloss mostly was a royal residence without a regent. 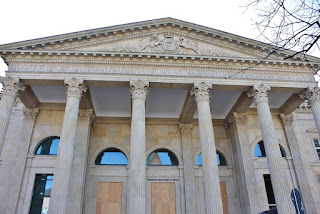 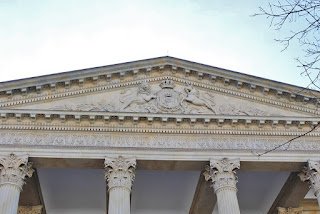 Nonetheless, in 1742 the Northern wing was rebuilt after it had burnt down during a fire a year earlier. In 1797, the Western facade was given a new appearance. Further works, however, were halted when French troops invaded the Kingdom of Hanover during the Napoleonic Wars and remained in the city until 1813. The French troops under General Édouard Adolphe Mortier looted the palace, which started to fall into disrepair soon after. Jérôme Bonaparte, younger brother of Napoleon and King of Westphalia, gifted the Schloss to the city and it became a barrack for 3,000 men.

Between 1816 and 1844, architect Georg Ludwig Friedrich Laves fully rebuilt the palace. The status of Hanover had been upgraded following the Congress of Vienna and the new Kingdom needed a representative residence to reflect that status. Laves gave the palace a Classicist appearance with Baroque elements on the side facing the Leine river. The column portico with six Corinthian columns to the other side was built during this period as well. A special feature of the new palace was a winter garden requested by Queen Friederike. Originally planned to house the the Queen's plants, the winter garden today is the office of the Prime Minister of Lower Saxony.

While there had been plans to expand the Leineschloss, these were abandoned under King George V of Hanover. He decided to build a new royal residence instead, the recently covered Welfenschloss. Already in 1862, the Leineschloss became home for parliamentary bodies. It was also at the Schloss where four years later the annexation of the Kingdom of Hanover by Prussia was announced. Subsequently, the Guelps left for exile and the palace was used by the Prussian state. It also housed an apartment for the Kaiser Wilhelm II, who stayed there around 20 times.

Towards the end of World War II, the Leineschloss was destroyed during air raids, as was much of the inner city of Hanover. While the idea to rebuild the palace as the seat of parliament arose as early as 1946, the official decision for reconstruction was made 10 years later. In December 1957, the remains of several Guelph rulers were transferred from the palace's crypt to the Mausoleum in Herrenhausen. During the following five years, the Schloss' exterior was reconstructed according to plans by Dieter Oesterlein while its interior was given an appearance to suit the needs of a parliament. While more recently the deconstruction of the palace in favour of a new parliamentary building was hotly debated, it was instead decided to renovate the Leineschloss once more.

Good to know:
The Leineschloss today is the seat of parliament of the German state of Lower Saxony. While the public can visit the palace, you will not find many reminders of its royal past in it. Instead just stroll along the banks of the Leine river and marvel at the palace's exterior while taking a tour of Hanover's Old Town.
Germany Guelphs Hanover Lower Saxony