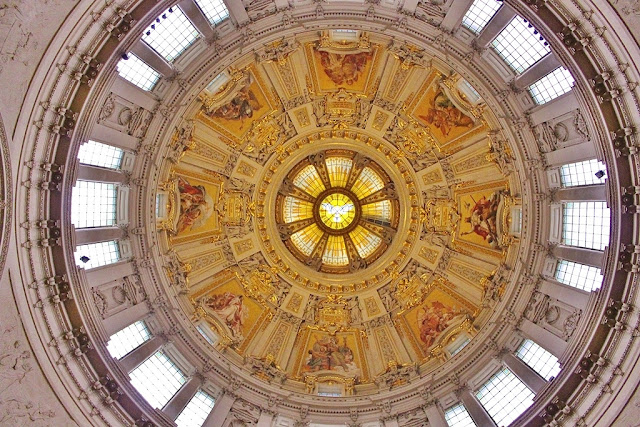 Let's continue our morbidly fascinating week of royal burial places with a closer look at the Hohenzollern Crypt at Berlin's Cathedral. But first, let's take a moment to admire the Cathedral's wonderful ceiling! Honestly, if you follow me on Instagram, you will know that I have a thing for ceilings but this is one of my favourites yet, just beauftiful! But back to our actual subject... As you may have guessed already by its name, the Hohenzollern Crypt is the final resting place of 93 members of the Hohenzollern dynasty, whose Protestant branch once reigned Brandenburg, Prussia and the whole of the German Empire. 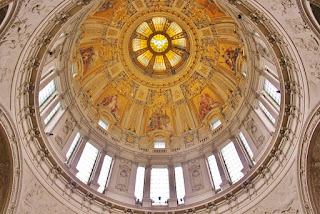 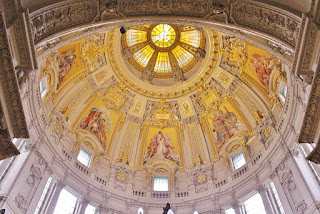 The Hohenzollern Crypt lies beneath Berlin's Cathedral. While the current building was consecrated in 1905, other churches have stood in its place before. For almost 400 years, between 1545 and 1915, the various churches were the burial place for members of the Hohenzollern family. Today's crypt also originates from the times of the last rebuilding of the Cathedral. It lies higher than previous crypts as during the course of the 19th century, the crypt was flooded not once but twice. Thus the current burial place lies 25 centimetres above the hightest known groundwater levels - and doesn't seem to have flooded since. 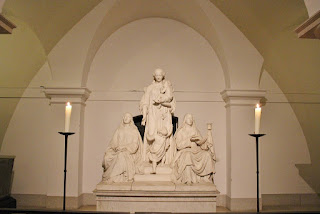 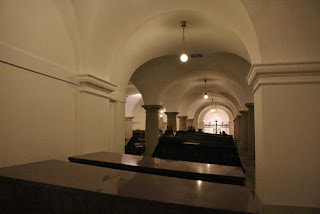 Interestingly though, none of the German Kaiser were laid to rest in the crypt bearing their dynasty's name: Wilhelm I found his final resting place at the Mausoleum of Schloss Charlottenburg, Friedrich III at the Friedenskirche in Potsdam and Wilhelm II at Huis Doorn in the Netherlands, the place of his exile. Some of the best known names buried at the Hohenzollern Crypt include Elector Friedrich Wilhelm, popularly known as the 'Great Elector', his wife Electress Forothea as well as the first King in Prussia, Friedrich I, and his Queen, Sophie Charlotte. 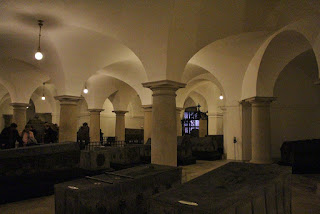 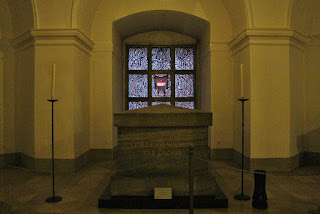 The tombs of the almost 100 members of the Hohenzollern family also buried in the crypt reflect almost 500 years of mourning culture of the state that would become famous as Prussia. The mostly very valuable coffins were made of different materials such as bronze, tin, wood, granite and marble. Some of them are covered with precious materials such as velvet and brocade. Some of them rather simple, other richly ornamented reflecting the tastes of the time. The last person buried in the crypt was a stillborn daughter of Prince Adalbert of Prussia and his wife née Princess Adelheid of Saxe-Meiningen. 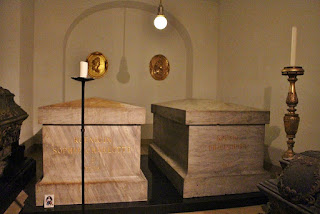 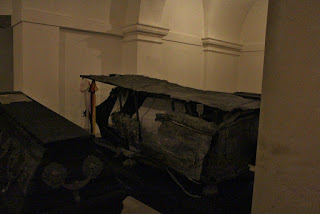 During World War II, the Hohenzollern Crypt was damaged when the Cathedral's main dome collapsed after being struck by a bomb and an ensuing fire. Some coffins were almost completely destroyed. It is also believed that some remains were lost following the fire and collapse. After the end of the Second World War, the Cathedral lay in what went on to become the German Democratic Republic. In 1975, reconstruction started with the help above money from the Protestant church of West Germany. At the time, the design was simplified and the northern wing, the Denkmalskirche (Memorial Church) demolished. Compared by some to the stunning Medici Chapel of Florence, it had survived the war completely intact but was demolished for ideological reasons by the communist government due to it being a hall of honour for the Hohenzollern dynasty. The Hohenzollern Crypt did survive the communist years and was restoration - still a work in progress - of the crypt and coffins started in the 1990's.

Good to know:
The Hohenzollern Crypt can be viewed as part of a visit to Berlin's Cathedral. The Cathedral is open each day from 9am to 8pm in summer and until 7pm in winter except for varying worship times. If you visit Berlin Cathedral make sure to walk all the way up to the top as it offers some stunning views of the surroundings. Admission for the Cathedral is 7 euros per adult. For more information, have a look here.
Berlin Church Germany Hohenzollern Prussia