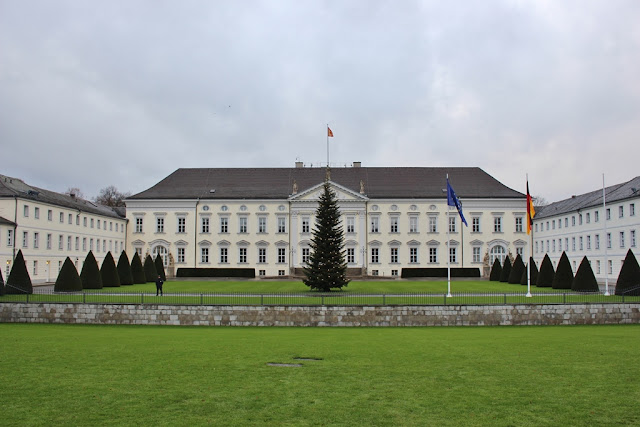 Today, Germany elects its new President. Time to have a closer look at his official residence, Schloss Bellevue in Berlin. Though unfortunately you are not able to see it from the inside, unless you warrant a personal invite from His Excellency. Literally "beautiful view", the palace is located  on the banks of the Spree river, near the Victory Column, along the northern edge of the Großer Tiergarten and is thus the most centrally located of Berlin's former royal residences.

It was Prince August Ferdinand of Prussia, youngest brother of Friedrich the Great, who commissioned architect Michael Philipp Boumann to plan and build a summer residence for him between 1785 and 1786. One of the previous owners of the estate on the bank of the Spree river was painter and architect Georg Wenzeslaus von Knobelsdorff, who had a manor house erected there in 1746. Schloss Bellevue was the first Neoclassical building in Germany, characterised by its Corinthian pilasters. While the main building measured two and a half storeys, the wings on either side, the "Ladies' wing" and the "Spree wing" featured two storeys. 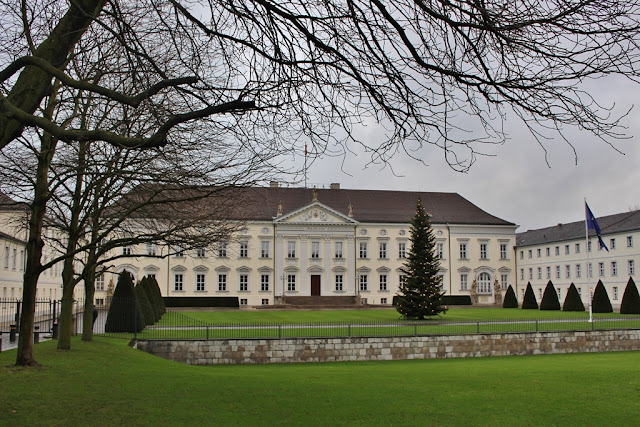 The interior design of the Schloss changed its appearance numerous times over the years. Mind you, it didn't do so by itself. Three years after the palace's completion, an oval ballroom on the upper floor of the main building was added by Carl Gotthard Langhans. It is the only room that is largely unchanged in its appearance since the time. In 1843, King Friedrich Wilhelm IV of Prussia acquired Schloss Bellevue. About twenty years later, it became the residence of his niece Princess Alexandrine after her marriage with Wilhelm of Mecklenburg-Schwerin. It later served various members of the Hohenzollern family as a home.

After the end of the monarchy in Germany in 1918, the palace came into the possession of the Free State of Prussia ten years later and then was turned into a museum of ethnography during the 1930's. It later became a guest house for the Nazi government in 1938 after being renovated by Paul Otto August Baumgarten. One of the most lasting changes to the exterior during the time was the addition of a perron staircase in the middle of the main building. 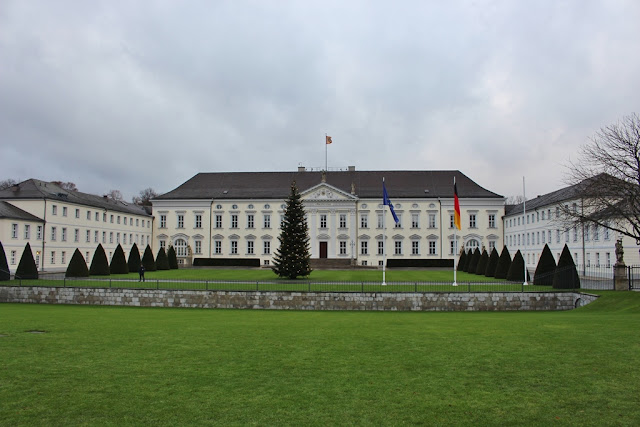 Starting in April 1941, the Schloss was severely damaged during air raids on Berlin and then during the Battle of Berlin in 1945. After the end of World War II, the palace was provisionally secured before it was rebuilt as the Berlin residence of the German President starting in 1954 according to plans of architect Carl-Heinz Schwennicke. In 1959, President Theodor Heuss inaugurated the new Schloss Bellevue though his primary residence remained at the Hammerschmidt Villa in Bonn, the de facto capital of Germany until reunification.

The palace was once again renovated and changed appearances during the 1980's. Roman Herzog, who was President between 1994 and 1999, was the only office holder who actually lived at Schloss Bellevue, which doesn't hold any living quarters anymore since the last refurbishment in 2004 and 2005. However, it remains the official residence of the President of the Federal Republic of Germany and it is the place where state dinners and receptions for foreign heads of state still take place.

Good to know:
Schloss Bellevue is not open to the general public and judging by the gazillion cameras around its walls and fences, you wouldn't have a chance to get anywhere closer than the view from the street.
Berlin Closed Germany Hohenzollern Prussia