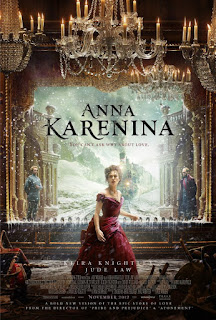 "All the world's a stage", William Shakespeare wrote and the 2012 cinematisation of "Anna Karenina" takes that very literal. Leo Tolstoy's momentous novel is largely set on a stage and while I have watched the film twice now, I am still not sure if I like it or not. Paper pieces turning to snow, office clerks stamping like a composed dance, actors freezing in mention - the best word to describe the film also figuratively certainly is theatrical. And truth be told, I usually am not a fan of overly theatrical movies. What saves "Anna Karenina" for me are the performances of Keira Knightley as Anna and Jude Law as Karenin.

The use of the literal stage certainly is a good metaphor to explore the ongoing public scrutiny which society ladies in 19th century Russia (and everywhere) were subject to. "Anna Karenina" tells the well-known story of a woman caught between the life she is supposed to lead and a world of love, passion and deception she never knew she was missing. Leaving out most political aspects of the novel, the film concentrates on the love story between Anna and Count Vronsky but considering that fact that it is only a film and the length of the book, it's all to understandable. If you don't mind, actually love or can keep an open mind about the theatrical adaptation of the story, "Anna Karenina" is certainly worth checking out.