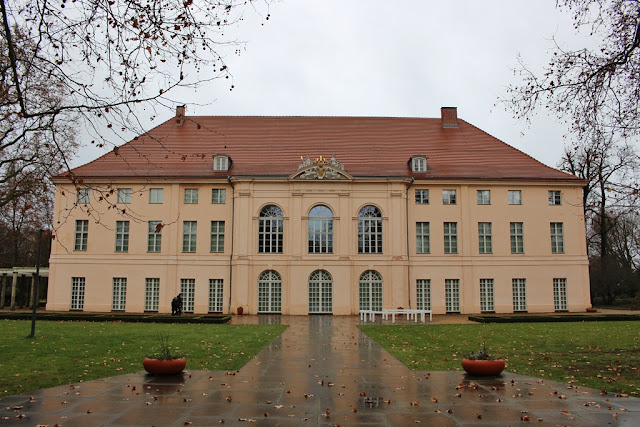 If these walls could talk, they wouldn't only have stories of monarchs to tell but also of socialism... There are few palaces who have seen the different times of German history as Schloss Schönhausen in Berlin has. Once the summer residence of Queen Elisabeth Christine of Prussia, wife of Friedrich the Great, the palace in the district of Pankow was later turned into the official residence of the president of the German Democratic Republic. It also welcomed numerous world leaders during its time as the guest house of East Germany before being turned into a museum after almost falling into ruins.

To start at the beginning, you have to go all the way back to the year 1662, when Countess Sophie Theodore of Dohna-Schlobitten bought a few tracts of land far outside of the gates of what was then Berlin. She had a manor house erected before selling the estate to Joachim Ernst von Grumbkow. It was the military leader who had the first summer palace built with the help of plans drawn up by architect Johann Arnold Nering. In 1691, Grumbkow's widow sold the palace to Elector Friedrich III of Brandenburg. The elector also commissioned Nering to carry out some minor changes on the palace.

It was at Schloss Schönhausen in August 1700 where the secret negotiations took place which would elevate Friedrich III to the rank of King in Prussia. In 1704, he - now as King Friedrich I in Prussia - commissioned Johann Friedrich Eosander von Göthe to carry out extension works on the palace. Two one-storey wings were added on the north and south side of the building. After Friedrich died in 1713, Schloss Schönhausen and its gardens fell into despair as his son, Friedrich Wilhelm I, did not take a major interest. Instead, court officials moved into the palace.

It was Friedrich Wilhelm's son, at the time still Crown Prince Friedrich, later to be called "the Great", and his wife Elisabeth Christine who occasionally stopped at the palace on their way to Schloss Rheinsberg. After his ascension to the throne in 1740, Friedrich gifted Schloss Schönhausen to his wife. For the following more than 50 years, until 1797, Elisabeth Christine spent all her summers at the Schloss while living at Schloss Hof in Berlin for the rest of the year. Meanwhile, Friedrich resided in Potsdam as the couple lived separate lives. 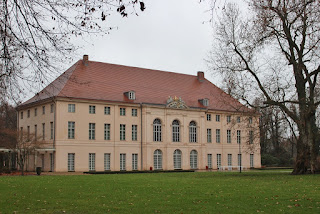 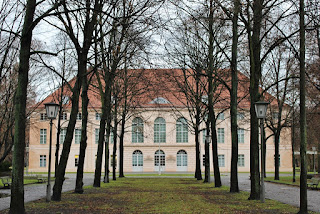 Elisabeth Christine's financial situation only allowed her to make minimal changes to the palace. This changed only after the Seven Years' War, which the Queen spent in Magdeburg, and heavy damage caused to Schloss Schönhausen by French soldiers. In 1764, Friedrich granted his wife the necessary funds to built the palace we know today. The plans were drawn up by Johann Boumann and included the construction of one of the most simple but beautiful staircases I have ever seen (though unfortunately didn't take any pictures of).

After the death of Queen Elisabeth Christine in 1797, the palace was sparsely inhabited. Between 1816 and 1822, Princess Marianne of Prussia spent her summer months at the Schloss together with the children of the late Queen Luise, wife of Friedrich Wilhelm III. Among the children were the future King Friedrich Wilhelm IV and future King and Emperor Wilhelm I. Queen Luise's sister, Friederike of Mecklenburg-Strelitz (and by marriage Queen of Hanover) also spent time at the palace. It was her who commissioned Peter Joseph Lenné to turn the gardens into an English park landscape.

During the last decades of the Prussian monarchy, Schloss Schönhausen faded into obscurity and was only used to store furnishings and paintings. In 1918, the building was seized by the new government and came into the possession of the Free State of Prussia in 1925. At the time, works to keep up the palace began and were intensified during the Nazi rule of Germany. Heating as well as water supply were added during those years. During the late 1930's, the palace was used to exhibit art and later became the storage place for the most valuable pieces of the Degenerate Art Exhibition. The Nazis confiscated art from museums they deemed to "insult German feeling, or destroy or confuse natural form or simply reveal an absence of adequate manual and artistic skill" including works by Ernst Barlach, Wilhelm Lehmbruck, Vincent van Gogh and Franz Marc.

During the Battle of Berlin Schloss Schönhausen was only slightly damaged and used to exhibit art once again in September 1945. A short while later, the Soviet military government seized the building and opened an officers' mess and later a school for the children of Soviet military. When the German Democratic Republic was founded on October 7, 1949, the Soviet Union handed over possession to the new East Germany. The first East German president, Wilhelm Pieck, used the palace as his official seat while living elsewhere. He welcomed various heads of states including Ho Chi Minh and Nikita Khrushchev at the palace. During those years, a few addition and changes were made to the Schloss. 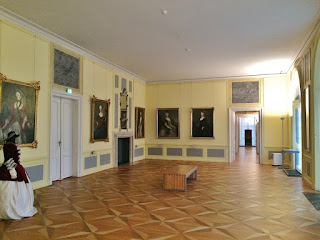 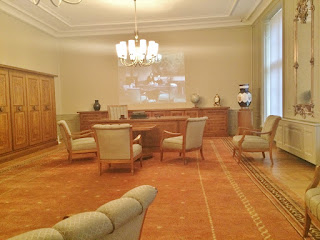 After Pieck's death in 1960, the new state council was introduced. While their constitutive meeting took place at Schloss Schönhausen, they soon moved into a new building in the centre of Berlin. The palace was then turned into the official guest house of the GDR and was officially called Schloss Niederschönhausen. Fidel Castro, Indira Gandhi and Mikhail Gorbachev included some of the guests staying at the palace. Around the time of German reunification parts of the estate were used for one of the meetings for the "Treaty on the Final Settlement with Respect to Germany". In 1991, Queen Beatrix of the Netherlands was the last state guest to stay at Schloss Schönhausen. The Dutch Queen had expressed the wish to stay in former East Germany and the palace was one of the few places representable enough. That same year, the palace was gifted to the city of Berlin by the unified Germany.

In 2003, it was considered to make Schloss Schönhausen the temporary official residence of the President of Germany due to renovation works carried out at Schloss Bellevue. The plans were soon abandoned as it turned out that there were dilapidations and Schloss Charlottenburg was used by the president instead. During the following two years, only the two first floors of the palace in Pankow could be used for guided tours and events. In 2005, possession was transferred to the Stiftung Preußische Schlösser und Gärten Berlin-Brandenburg, a foundation for the upkeep of Prussian castles and gardens in Berlin and Brandenburg.

During the following years, almost nine million euros were used to fully renovate the building and create a museum that gives an insight into very different times of German history. I would even call Schloss Schönhausen an insiders' tip for everyone visiting Berlin a little longer than for the obvious sights to see: While the ground floor shows the court life of Queen Elisabeth Christine of Prussia, the second floor gives glimpses into Socialist life at the palace as well as an exhibition about Schloss Schlobitten in Słobity, Poland, the former home of the Dohna family, the first owners of Schloss Schönhausen. I will definetely need to go back sometime to take better pictures!

Good to know:
Schloss Schönhausen is one of the little known sights of Berlin in the district of Pankow. It is open to the public on Saturday and Sunday, 10am to 5pm between November and March, as well as Tuesday to Sunday, 10am to 6pm, between April and October. Admission is 6 euros. During the winter season and the weekdays of te summer season, you can only visit via guided tour. For more information, have a look here.
Berlin Dohna Germany Grumbkow Hohenzollern Open Prussia