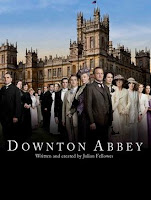 What's there to be said about "Downton Abbey" that hasn't already been said? The ITV show is a phenomenon in itself, probably the most famous of all British period dramas. In case you have been living under a rock, it tells the story of the aristocratic Crawley family and their servants who all call Downton Abbey, a Yorkshire country estate their home. The series starts out in 1912 with the sinking of the Titanic and the death of the heir to the Earl of Grantham, who only has three daughters. It follows the family and their acquaintances through the years of World War I, the roaring 20's and the eventual decline of the British aristocracy.

The show is beautifully made, well-crafted and a pleasure to watch with some great acting performances. Standing out, of course, is Dame Maggie Smith as the Dowager Countess and some of TV's greatest one-liners. (What is a weekend, anyone?) Though as with most TV shows the first few seasons tend to be better than the latter ones. Apart from the fact that the last one or two had Alnwick Castle in them. Any show that offer glimpses into that stunning castle is a good one.