Warning: There may be spoilers. 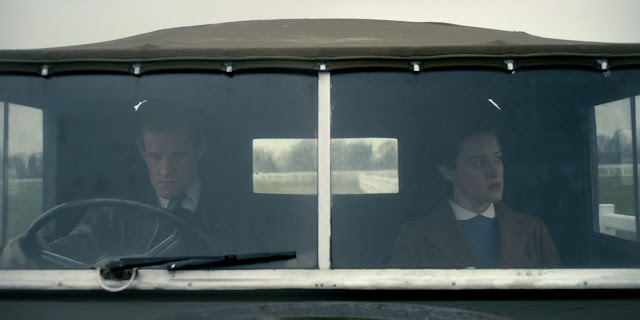 The focus of the ninth episode of "The Crown" is on the aging Winston Churchill and his distaste for a portrait commissioned for his 80th birthday by British modernist Graham Sutherland because it shows who the Prime Minister really is: A man beyond his prime with the inevitable end of his career coming ever so nearer. And while it may be sad to see, it's definitely for the better for this series as the non-major event series continue to be somewhat lacking though this is one of the better ones.

In the episode, we meet Lord Porchester - or Porchey, as the Queen likes to call him. He proposes to his girlfriend in a posh London restaurant. However, the woman he wants to marry is a bit reluctant wondering if he is still hung up on Elizabeth but reassures her, "For her, there was only ever Philip." Meanwhile, the Queen is at home waiting for her husband to come home. When he finally does, the pretends to be asleep. Philip was out and about drinking with his friends keeping himself entertained anywhere but Buckingham Palace as he still hasn't found a role for himself.

As it turns out, Porchey is the man everyone would have liked Elizabeth to marry. An English aristocrat who knows his place in life without much ambition and doesn't stay out late at night but instead despises high society life, he may have been a better fit for the head of state. Late another night, the Queen calls him to talk about her horses, their shared passion. He's her racing manager and soon gets a direct phone line to Elizabeth. Partying Philip isn't much into the whole horse business with the clouds full of marriage trouble looming ever darker over Buckingham Palace.

A few evenings, arguments or confrontations in silence later, the Queen tells the Duke of Edinburgh, "I have nothing to hide from you, nothing. Porchey is a friend and yes, there are those who would have preferred me to marry him. Indeed marriage with him might have been easier, might have even worked better than ours. But to everyone's regret and frustration, the only person I have ever loved is you. And can you honestly look me in the eye and say the same?" He looks her in the eyes but does not say a word.

Then they are off to 10 Downing Street for a farewell dinner to Winston Churchill. Just a few scenes earlier, the Queen had her last audience with him. It was a sentimental one with Elizabeth wondering, "However will I cope without you?". Churchill replies, "You will be fine, ma’am. I have nothing more to teach you, which is why it’s time for me to leave." He kisses her on the forehead and it is like Elizabeth loses her father figure. Her farewell speech is equally as sentimental and you can't help but get the feeling that so many things the makes out Winston to be, Philip isn't. It will be interesting to see of Philip will soon be able to step up and fill the void as Elizabeth's most trusted advisor. Right now their marriage in on the rocks but we all know that he will come around one day. At least he manages to mouth "sorry" to his wife across the table.
CastleDrama