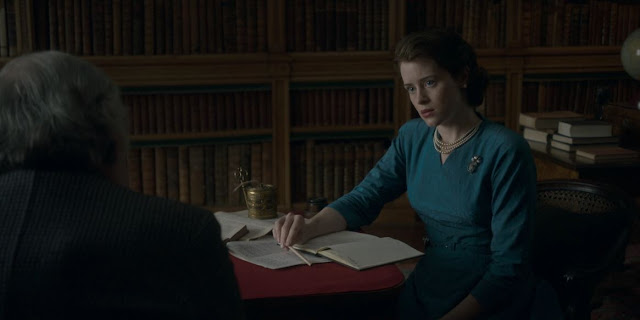 With the sixth episode of the Netflix original "The Crown" being every bit a royal soap opera, you start to wonder whether all the buzz in advance and the excitement of the first few episodes are starting to wear thin. As the Duke of Windsor put it so well, "Who wants transparency when you can have magic?" The first two episodes as well as the fifth featuring the coronation were the best episodes yet. However, whenever there is not a major royal event looming on the horizon, it seems that the show is struggling a bit. We are on episode seven and while everyone's role seems to be firmly established, we are yet to see the motifs behind many of the characters. Why do they act the way they are? Why is Philip so unhappy with his role? Why is Margaret so hopelessly in love with Peter Townsend? Why is the Queen struggling at being, well, the Queen?

There is only so many times you can see the Duke of Edinburgh frolicking in the skies training for his pilot's license. So maybe it's a good thing that he hardly is in episode seven? Instead we focus on Queen Elizabeth's education - or lack thereof. She may know the constituation better than anyone else but she still feels ill-equipped to deal with the politicians. "You know when to keep your mouth shut", her mother tells her but that isn't enough for Elizabeth. We see her lack of knowledge in her audience with Churchill when she asks the Prime Minister to refresh her memory about atomic bombs, the Soviet Union and U.S. President Eisenhower.

There's also a bit of private secretary drama going on at Buckingham Palace. Tommy Lascelles, more or less trusted private secretary of four monarchs, is about to retire. Elizabeth would like for Martin to replace him. He was her secretary before becoming Queen and he even was the one who broke the news of King George's death to Philip during their visit to Kenya. However, as he is only the junior deputy and things at Buckingham Palace must go on as they have always done, Tommy doesn't want to hear any of it giving a speech on how the little things the Duke of Windsor did - not going to church, replacing staff - was basically the beginning of the end. Thank God, Philip is out and about wherever so he can't hear any of that.

In political news, Deputy Prime Minister Eden is sick, as is Winston Churchill. So the country is basically without a leadership but nobody cares to tell the Queen. Churchill still gets the palace to invite Eisenhower, which quickly sends the Buckingham Palace staff into a frenzy because it's not that easy to organise a state dinner within a week. Elizabeth finds herself in a similar state of panic trying to read up on the U.S. president with the help for her tutor. In the end, the dinner is cancelled because Churchill suffers a second stroke. The Queen still doesn't know any of it until her old secretary, Jock, comes in and spills the beans by mistake.

Understandably, Elizabeth is not amused to learn that Churchill and Lord Salisbury have been lying to her. On the advise of her tutor, she decides to give them a lecture because they are "English, male and upper class" and the only thing that puts them in the corner is a telling down by their nanny. The Queen does it in two very different ways. Salisbury simply gets it straight, while Churchill gets a lesson on trust - indeed very different yet very powerful. She asks him whether he is still fit for office saying, "I would ask you to consider your response in light of the respect that my rank and my office deserve not that which my age and gender might suggest." He responds saying that he soon will as he sees her "ready to lead". It's a rare victory for Queen Elizabeth. In the drama of the private secretaries she isn't as fortunate but she decides to cancel her first meeting with the one she didn't want. You have to celebrate victories as they come, with your husband - in bed.
CastleDrama