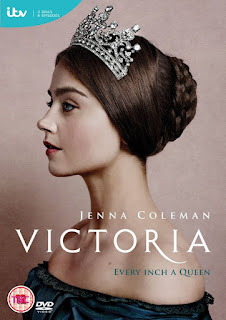 Well, one things is for sure: The coming Sunday nights won't be as royal as the past eight or so. The first season of ITV's Victoria just ended but luckily the show will return for a second season next year. I guess you are able to guess by now that I did enjoy season one very much. Admittedly, my expectations - as with any fictionalisation of actual historical persons - weren't very high, but even if they would have been, I don't think I would have been too disappointed.

The first season follows the young Queen Victoria from when she takes the crown at 18, dealing with matters of the kingdom with the help of Prime Minister Lord Melbourne - no, I was never Team Vicbourne - and her eventual marriage to Prince Albert. It ends with the birth of the couple's first daughter. While I won't go into too much detail plot-wise, here are a few thoughts...

Apart from a few aha moments, most of the downstairs storylines were a bit superfluous, as were the rats trying to drive Victoria insane. The series also had a bith of an uncle complex: Both the King of the Belgians, Leopold, as well as the King of Hanover, Ernst August, (or the Duke of Cumberland how the show liked to call him with Hanover mentioned about once or twice) lingered around for far too long - and the latter one and his scar even came back in time to make him the super-villain.

On the bright side, there were a few royal storylines that probably did not take place this way but charming Prince Ernst did make an interesting contrast to his brother, even if "[[his little flirtation]] was merely a convenient distraction from the very serious job of cheering [[Albert]] up”. More truthful to historic events was, in difference, the courtship of Queen Victoria and Prince Albert. Multi-layered were the portrayals of both characters and I very much look forward to discover more of them in season two. It will also be interesting who of the main cast will stick around for a few episodes more or if we will see an even larger focus on V and A in the episodes to come.