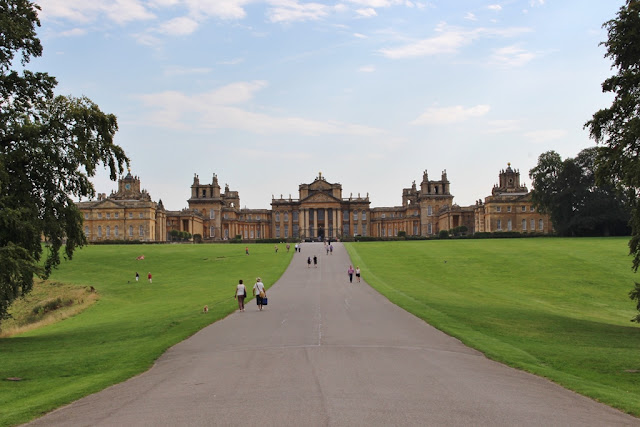 Beautiful Blenheim - the birthplace of Sir Winston Churchill and the only non-royal residence in Great Britain to be called a palace. On my recent trip to London I also made it out to the English countryside to see the 187-rooms-home of the Duke of Marlborough, together with one of my favourite fellow castleholics The Lady & the Rose. 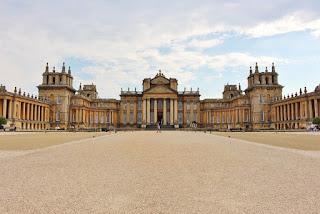 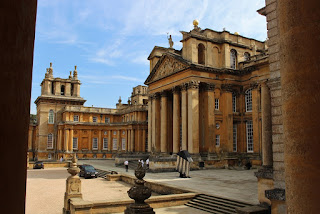 The story of Blenheim Palace goes back all the way to the year 1705. A year prior, John Churchill, 1st Duke of Marlborough had led the English to a victory in the Battle of Blenheim during the War of the Spanish Succession. To thank him for his achievements, the Duke was given the park, Woodstock Manor and 240,000 pounds to build a palace for himself as a gift from Queen Anne and a grateful nation. The 1st Duke of Marlborough commissioned untrained architect Sir John Vanbrugh to draw up plans and works started in 1705. 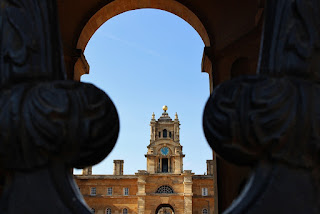 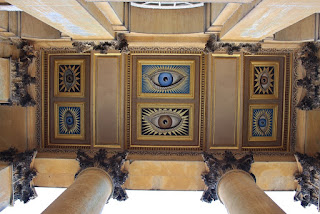 The Duke's choice of architect wasn't in favour of his wife's wishes and the two soon started disagreeing on every level, from design to taste. The Duchess wanted not only a fitting tribute to her husband but also a comfortable home, two requirements that weren't necessarily compatible in 18th-century architecture. At the same time - though obviously not communicated openly -, the Marlboroughs didn't have the necessary money to finance all the plans drawn up by Vanbrugh. They had not been of great wealth before the Duke's military successes and the Duchess fell out of favour with Queen Anne in 1711 after serving as her Mistress of the Robes for a number of years. 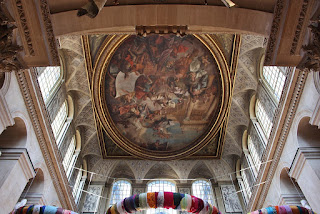 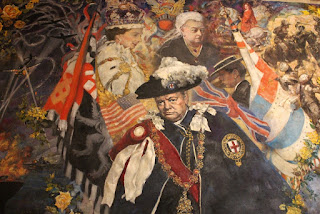 After their final argument in 1712, all state money ceased and work even came to a halt. The Marlboroughs were forced into exile on the continent returning only after the Queen's death in 1714. After their return, the Duke decided to complete his palace at his own expense. Work resumed in 1716, still under the leadership of Vanbrugh. However, the project relied completely upon the limited means of the Duke himself, who suffered a stroke in 1717. 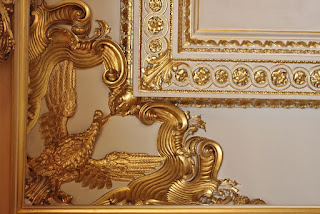 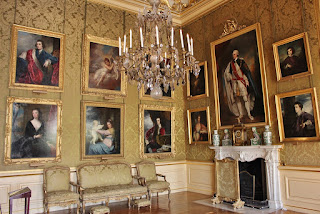 The disagreements between the Duchess and architect Vanbrugh soon came to light again. Duchess Sarah blamed him for ever-rising costs of a design she did not like anyway. Following a meeting with the Duchess, Vanbrugh left the building site in a rage, insisting that the new masons, carpenters and craftsmen, brought in by the Duchess, were inferior to those he had employed. Work on the palace was then completed by Nicholas Hawksmoor and furniture designer James Moore. 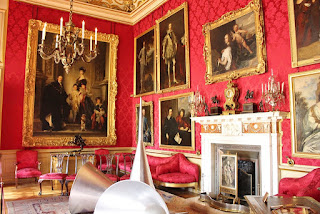 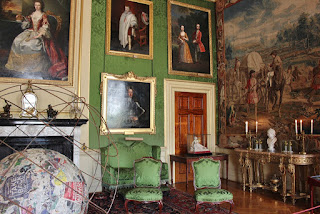 After the Duke's death in 1722, completion of the palace was carried out under the instruction of his wife. She called upon Hawksmoor to complete the interior design of the library, the ceilings of many of the state rooms and other details in numerous other minor rooms as well as various outbuildings. The Duchess saw the palace as a tribute to her husband, however, often using lower-quality materials in unobtrusive places as to cut the costs. 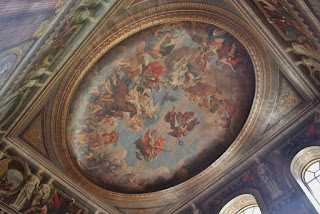 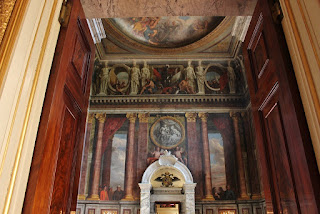 As the 1st Duke and Duchess had no sons, the palace and title passed first to their daughter Henrietta and then to their second daughter Anne's son Charles Spencer, Earl of Sunderland. Despite calling a palace their home, the Marlboroughs still were not of as great wealth as other English ducal families. However, they managed to live quite comfortably until the time of the 5th Duke of Marlborough (1766–1840). He was a spendthrift who considerably depleted the family's remaining fortune. He was eventually forced to sell other family estates, but Blenheim was safe from him as it was entailed. The family kept afloat by also selling works of art adorning the walls of Blenheim Palace. 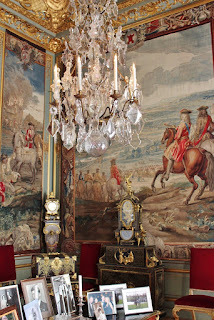 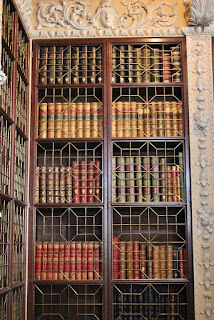 By 1892, when the 9th Duke inherited, the family was virtually bankrupt. While not able to work to make a living due to social conventions, there was a rather easy way to come to a large sum of money: Marry rich. The easiest way to do so in 19th century Britain was to find yourself an American heiress - and so Charles (or "Sunny", who was, by the way, the cousin and close friend of Winston Churchill) did. The wife of his choice was Consuelo Vanderbilt and love did not play any role whatsoever in their match. Money did. 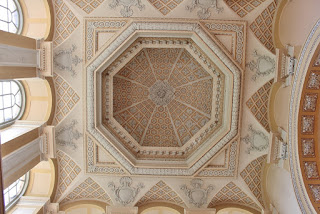 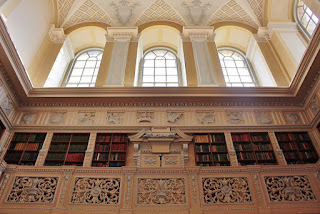 Consuelo's mother was desperate for her daughter to marry a duke and her father was happy to pay the rather hefty price of 2,500,000 US-Dollars, which was worth about 62 million US-Dollars in 2007. And because that wasn't enough, the couple were given a further annual income each of 100,000 US-Dollars for life. While Blenheim Palace benefitted greatly from their match, the couple didn't. They seperated after eleven years and two sons together in 1906. 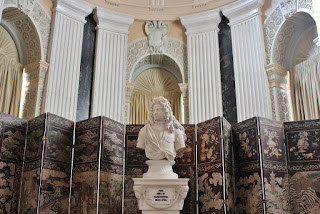 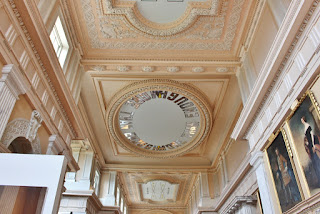 The 9th Duke used the money he gained from his advantageous marriage to extensively renovate, restore and redecorate his palace. Tapestries, paintings and furniture were bought in from all over Europe to fill the depleted palace while the couple was still on their honeymoon. The number of servants was also increased greatly to reflect the family's new wealth numbering to around 40 for the interior and another 50 for the exterior. After his divorce the Duke married again, to another American named Gladys Deacon. The most lasting change she made to Blenheim were her's and her husband's eyes painted onto the ceiling of the great north portico. 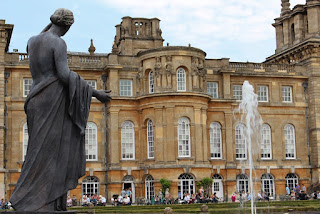 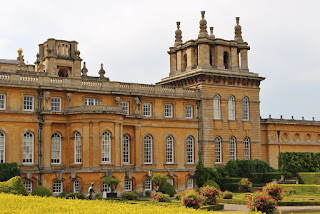 Since the times of the 9th Duke, Blenheim Palace has found itself back in the shallow waters. In 1987, it became a UNESCO World Heritage Site. These days, the 9th Duke's great-grandson, the 12th Duke, and his family live in the palace part-time during the hunting season. During the summer months - at least this year - they also open their bedrooms to the public in a tour of the Duke's private apartments. It's always interesting to find a flatscreen TV and a game of Monopoly next to 18th century French furniture.

Good to know:
Blenheim Palace is located near the town of Woodstock in Oxfordshire. The palace is open to the public daily, except for Christmas Day, between 10.30am to 5.30pm during the spring and summer months, it closes an hour earlier between October 31 and February 11. Admission to the palace, park and garden is 24.90 pounds though you get 30 percent off if you buy your ticket on the bus from Oxford. There were also three extra tours when I visited though I'm not sure they'll be available again next year. In the meantime for further information, have a look here.
Oxfordshire Spencer-Churchill United Kingdom